Home » Separate Classes or the Same? One Twin Mom’s Experience- 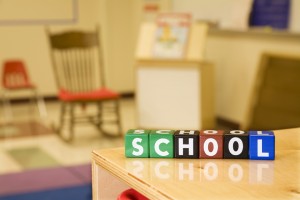 Told By: Toby Amir Fox-Toby resides in Phoenix, Arizona where she attempts to juggle a husband, three kids, a dog and a full-time job as a fund development officer without losing her sanity.

“The first time someone mentioned separating my twins in school they were 21 months old and preparing to enter a Two’s classroom.

Hannah and Abbie have been attending daycare/preschool since they were 13 weeks old and my husband and I had always planned on separating them in school at some point. In the long-run, we felt that separating would be in their best interest, but envisioned doing it when they were older and entering elementary school.  So when then teacher mentioned separating the girls as they prepared to transition into a Two’s classroom I was vehemently opposed to the idea. My twins had ALWAYS fought relentlessly over anything and everything. I used to tell people that after 8 ½ months in the womb they were ready for a trial separation. But their behavior was also age-appropriate, and I felt that the school was pushing separation because it was easier to separate the girls than deal with the problem itself. As I said to one teacher, “if my kids weren’t twins you would never have suggested putting them in different classes. You would have simply managed the situation differently.”

Never did I imagine that they would consciously choose to separate from each other.

Towards the end of last school year, when Hannah and Abbie were in the Two’s classroom, the teachers did an activity where the kids rotated to different rooms. My daughter Hannah ended up in a group different from her sister. The teachers thought nothing of it until the next day, when after recess Hannah insisted on going inside with the class that she had been with the day before.  So they let her spend the rest of the morning in the other classroom. The same thing happened the next day. And the day after that, and the day after that. After talking with all of the teachers involved, we told them to follow the girls’ lead: if Hannah and Abbie wanted to be in different classes during the day, and it wasn’t disruptive for the other kids/teachers, then we had no problem with it.

After being apart for a few hours the teachers almost immediately began noticing positive behavior changes. Hannah, always the more dominant personality, was happy to socialize with new friends and Abbie seemed more verbal and independent without her twin. Most noticeably, they didn’t seem to be fighting as much at school or at home. The switching of classrooms continued through the end of the school year and after consulting with the preschool director, we decided to place them in two different classes for the summer. If this worked, they would stay with these teachers for the upcoming school year.

When all was said and done, placing them in different classes was the best decision we ever made, and their school separation continues to this day. Hannah and Abbie are together when we drop-off at 8am, they go their separate ways from 9am until about 3pm, and then they are together for the rest of the afternoon. We have also told both sets of teachers that if they want (or need) to see each other during the day to let them have that time together. When we asked if they wanted to be in the same group for camp this summer they looked at each other, then looked and me and simply said, “no.”

The decision to separate, while positive, hasn’t been without challenges. I had always envisioned having twins that craved being with one another, and I worried that they would lose their twin bond if they were apart at such a young age. In addition, the transition was harder on Abbie who struggled with how to appropriately interact with her peers, as opposed to her sister. Not to mention the added stress of trying to keep track of two different class schedules, (three, when you include their older brother), different friends, the nuances of the preschool birthday party circuit, and trying to balance being in two places at once for things like the preschool Mother’s Day Tea.

In hindsight, I believe that separation brought my twins closer to each other. They enjoy and appreciate each other more acutely and they look forward to sharing the details of their day with one another. Their personalities have also blossomed in ways we never imagined: Hannah, my social butterfly with an easy smile who aims to please and Abbie, sassy and independent who marches to the beat of her own drummer.  The decision has ultimately helped them, and those around them, see them as two individuals as opposed to the “Fox Twins.”

We never planned on doing what we did, when we did. But things have a way of working themselves out, and in the end, the girls made the decision for us. Perhaps they knew best all along.”

Thank You Toby for sharing your experience with us! What about you? Are your twins going into the same classroom or separate? Post your comments below.