Home » How We Survived Year 1 Without Much Help 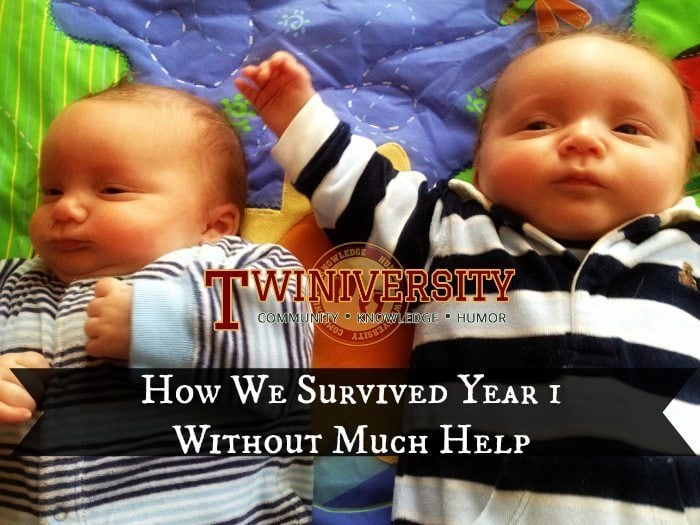 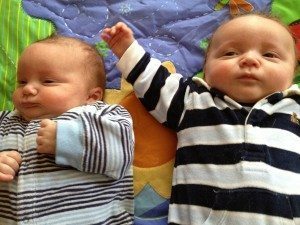 As I sit down to write this article, I’ve had to redirect my 16-month-old twins no less than four times already. One likes to climb on stools, chairs or whatever else to get to places he shouldn’t. The other likes to take all the trash out of the can, all of the recycling out of the bag, and all of the stuff to be shredded out of the container. Add to that my dear four-year-old asking me a million questions and I honestly am not sure how we are going to survive the second year with twins!

But enough of that. This is about how my family survived the first year.

When I found out that I was pregnant with twins at my eight week ultrasound, I was in shock and my husband had a near panic attack. To be honest, for weeks it felt like I had been diagnosed with a serious illness. Twins. How were we going to afford them? How were we going to handle going from one child to three children in the blink of an eye? What the h*ll were we going to do?

Fast forward through eight grueling months of pregnancy and on November 1, 2012, we welcomed Aaron and Benjamin just 15 minutes apart. They were immediately whisked away to the NICU and so our journey with twins began. For the first 12 days of their life, the boys were in the PCN, a step down unit from the NICU. 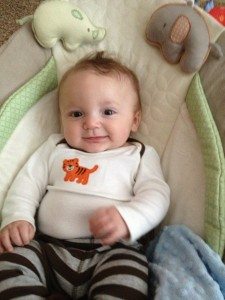 During my entire pregnancy, well meaning people would say “I hope you have lots of help,” when they found out that I was having twins. Each and every time I wanted to either crawl into a hole or burst into tears because we, in fact, did not have help. My family lives in South Carolina and my husband’s family lives in North Carolina. We live in Virginia. While that may not seem like far, it may as well be the North Pole. The first two weeks that the boys were home, I handled everything by myself. My husband had to go back to work.

I remember that first night at home. I prepared all of the boys’ bottles of breast milk and put them into a cooler beside my bed. I put them in their little rocking sleep chairs and waited for them to wake up at 11 pm and then again 2.5 hours later. Reflux kicked in shortly after they came home.

My mom came for five days. She took the night shift and I got a few precious hours of sleep. My husband’s mom came for almost two weeks. Then, a few friends came once or twice to let me get laundry done, vacuum or nap. And then right about when I had to go back to work at 11 weeks, the help stopped coming. Sure I didn’t continue to ask for help, mind you. But, as is typical when you have a baby, people are there in the beginning and then go back to their lives, assuming you have it figured out. I certainly have been guilty of that! 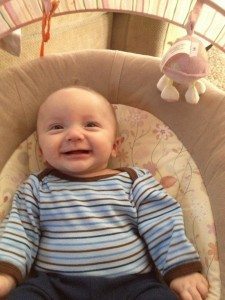 And so my husband and I took turns getting up with the boys every three hours at night. We zombie-stumbled our way through our work days and repeated the entire process each night. It was hard.

I struggled mightily with postpartum depression. I went to therapy. I got medicated. My husband and I had huge fights. But we were all we had so we just kept going. People would say “How do you handle all of this?” I would smile and respond, “We don’t have a choice.”

Parents of twins would see us out and about and tell us how much easier it would get at six months or a year. And so we set mini-goals for ourselves. Make it to three months; make it to six months; and finally make it to one year. Get the boys to sleep all night. Get the boys to take their own bottles. Pray.

We took care of the twins and our daughter and made sure they were all healthy and happy. We sacrificed our own free time and needs because we had to. Nights were spent folding laundry, cleaning and getting as much sleep as possible before the babies woke up again. Our daughter slept on a cot in our room because we were too tired to fight over bedtime and the poor girl just wanted her mom and dad. We were blessed to have excellent teachers at daycare who loved our kids as their own. Those same teachers got them on a schedule! 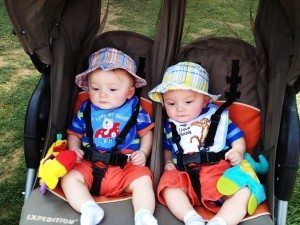 My  husband and I would have lunch dates during the work day because with no extra money for sitters and no family, that is all we could do. Well-meaning coworkers would offer to babysit but when I asked they would be busy with their own lives. Things got a bit easier as the boys got older. They could interact with big sister more which helped her feel included.

On November 1, 2013 we celebrated the twins’ first birthday. We had a huge party and we congratulated ourselves on surviving that first year. Then, as always happens when you have kids, our then three year old fell off her swing and busted up her nose and face and my husband rushed her to urgent care. Because, after all, we wouldn’t want to get to overconfident! Children sure do keep you humble. 🙂 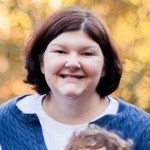 Jeannette Toscano is mom to identical twins Aaron and Benjamin and big sister Emma. Realizing that raising three children under the age of four is a full time job, she recently left her job in public relations to stay home with her children. Writing about life, being a mom and raising kids keep her sane. Visit her blog at parentingonfly.blogspot.com.