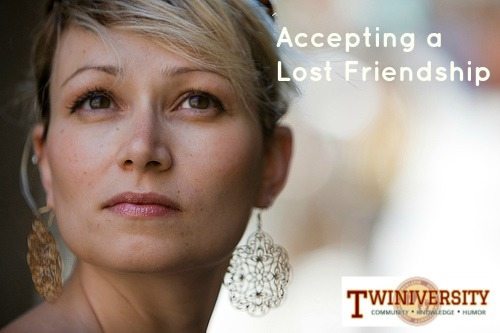 I recently wrote an article on stepping back into your social circle once you are ready to leave your nest with your twins. After receiving many comments and replies to my article it was clear to me that I was not as alone in this issue as I had originally thought. My heartbreak and upset at losing some of my closest friends after having twins was shared by so many and as comment after comment and “share” after “share” popped up it hit me that I was connecting with twin parents all… over… the… entire… world!

And so I thought that if so many were out there and understood where I was at in this aspect then there may be more people out there that were still trying to figure it all out like I was. I was so adrift and lost after I realized that this change was going to be very real and I had to accept that. 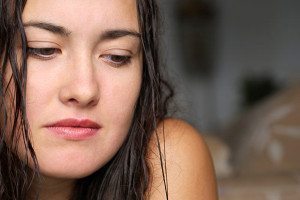 When my twins were born they took up my entire world. I had no time for lunch with friends or even a quick phone call. I was completely absorbed by those two tiny beings and 100% focused on putting one foot in front of the other. Before I knew it six months had passed and as I lifted my head out of that twin fog (if you are a twin parent then you know about the fog) I realized that I hadn’t talked to anyone in ages. And then the more I looked around the more I began to notice that my circle was going on about their merry lives without me. I saw posts on Facebook boasting of shopping trips and lunches and I was deeply hurt that I had not been invited. In my mind it was just being rubbed in my face as happy pictures were posted here and there.

I sat and I stewed on it until it festered in my heart. Reason insisted that it was well known I was not going to be able to get a babysitter at the drop of a hat and so inviting me seemed pointless. But my heart didn’t see it that way. I wanted to be invited even if I couldn’t go. I debated on hashing it out and throwing my sucker in the dirt (toddler terminology for fit throwing. See also: “Hissy fit”.) but I didn’t want to stir up a hornet’s nest if it was just me letting my emotions run away with me.

Eventually I had to talk about it. There was confusion as my circle didn’t understand what I meant when I said I didn’t feel included and I stated clearly that I was upset. I wasn’t being invited to anything anymore. Of course the response was that I had twins and everybody knew I wouldn’t be able to get a sitter to do anything. I was angry that the decision on whether or not to invite me was based solely on my ability to find a babysitter. How did anyone know I couldn’t go…if I was never asked in the first place? 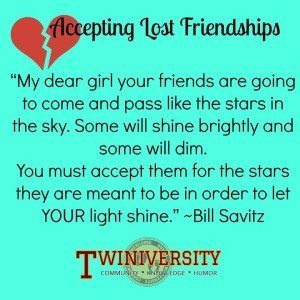 I stated my case and left it at that and after a while I realized that this was just the way things were going to be. I would get the occasional invite here and there and for some reason or another I couldn’t make it. I felt like I was a hanger-on — that I was outside of the circle. And after a while it became a relief not to even stress over non-invites because I didn’t want to deal with the awkwardness. I mourned the loss of the circle like one would mourn the loss of a loved one…and in essence I did. I had to go through a grieving process and it was brutal on my mental and emotional well being.

Acceptance is the hardest part. It took me close to six months to accept that this was the way things were and there was no fixing it. The circle I was a part of had moved on and I didn’t fit in anymore. I was a different person and they were different people. The sad fact was that it took me a really long time to even come to that conclusion.

I was so devastated at first and it took its toll on my emotions. From one day to the next I had no idea how I was going to feel about this separation. Some days I was just fine and would shrug away that little burn in my chest as I remembered something of my friends. Other days I would cry over something really simple and stupid I had seen posted on Facebook. It was a roller coaster of emotions that I would not ever want to ride again. 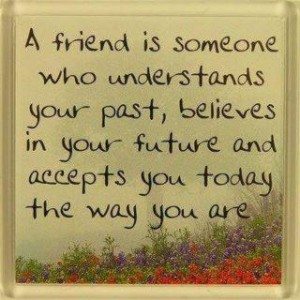 As the years progressed I have come to understand that this is a big part of the person that you are. How you deal with your heartbreak determines how you deal with future friendships and relationships. Do I want to ever deal with that heartache again? No…unequivocally not.

But do I let past upsets and broken friendships decide how I am going to be when I meet new potential friends? One part of me says, “Yes.” The wary part of me shies away from the prospect of ever feeling like that again. But the strong person inside of me would rather see what’s out there. You can never have too many friends and I, for one, love to make new ones at every opportunity.

So my point is to not let those past broken friendships jade you to the possibilities that are out there just waiting for you to explore. I am a firm believer that God brings a person into your life for a reason — they are either a lesson or a blessing. In my case, I have dealt with both. But I have learned and grown emotionally and mentally as a result so I can’t say that it was a lesson I didn’t need. I now count those past friendships as a blessing in disguise because through that emotionally turmoiled time I found myself to be stronger than I ever believed I could be. I have embraced many new friendships and I sincerely hope to gain more!

My grandfather once told me, “My dear girl, your friends are going to come and pass like the stars in the sky. Some will shine brightly and some will dim. You must accept them for the stars they are meant to be in order to let YOUR light shine.” ~ My grandfather, Bill Savitz

Make sure to check out Deanna’s prelude to this piece, It ain’t easy keeping friends when you have twins. 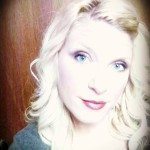 Deanna Burkett is multi-tasking mama of two year old boy/girl twins and teens and a wife of 19 years to a very patient husband. On any given day you can find her pinning her heart away at Twiniversity’s Pinterest page, saying howdy to a new member of Twiniversity’s Message Board, working on school work while she earns her double degree of History and English at Ashford University, catering to her teenagers every beck and call or chasing one or two naked babies around the house! Look for her on Facebook, Twitter or on Pinterest!