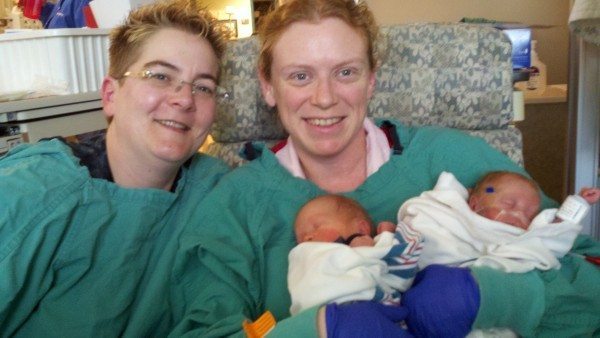 Twiniversity supports all types of families. Anybody who has the love in their heart to bring children into the world, no matter their situation, is amazing in our book! So we thought it would be great to get the perspective of having twins from an LGBT couple. Here is the story of Dawn and Michelle and their beautiful family!

My name is Dawn. I moved to the DC area from Michigan 5 years ago to be near my sister who has Stage IV cancer.  I met my wife, Michelle, online while I was still living in Michigan and we met in person once I had moved. We dated for a little over a year when the same-sex marriage law was passed in DC and we decided to get married.

We both wanted children so I started fertility treatments fairly soon after the wedding. We tried 5 IUI’s (artificial insemination), once at home, and then finally got pregnant with the twins when we decided to do IVF.  Our twins Micaela and Aiden just turned two-years-old at the end of February. We debated on whether we should transfer one or two embryos during the IVF process. We opted for two since I didn’t want to go through another IVF if only transferring one embryo failed.  So I wasn’t too surprised when the ultrasound showed two embryos, but my wife was a bit shocked! She went golfing with her friends the next day and had to do a little drinking to let the idea of two babies sink in. 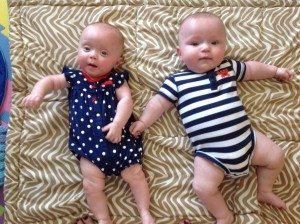 We were a little nervous to tell my mother-in-law about the pregnancy because she did not react very well to the news that we were getting married. But getting pregnant was the best thing that could have happened for our relationship.  She was ecstatic that she would now have not one, but two more grandbabies.  She even moved in for 3 months after the babies came home to help us out.  My father was overjoyed as well. He said he put a sign in his front yard stating that he was going to be a grandpa (first grandkids on my side of the family).  I haven’t had any bad reactions to being LGBT parents, at least so far. If people have issues with us, they have kept it to themselves.

My pregnancy was pretty rough.  My cervix shortened and I had to have a cerclage. Then I was put on bed rest for 3 months. I had something called coliostasis which is when your liver starts to fail and your body doesn’t process your bile. This causes you to itch terribly…to the point you want to rip your skin off! I had multiple times where I was hospitalized for preterm labor.  And I developed preclampsia.

My son had too much fluid in his brain on the ultrasounds so they sent me to Children’s National Medical Center for an MRI (which lasted like 2 hours of not being able to move or go to the bathroom). They diagnosed him with Agenesis of the Corpus Callosum (ACC).  Basically, he is missing the part of the brain in the back that connects the two hemispheres. It might result in no complications, or it might result in up to extreme intellectual disability and seizures. Luckily, the only complication that we have found so far is that we have to buy him larger hats. Ha! 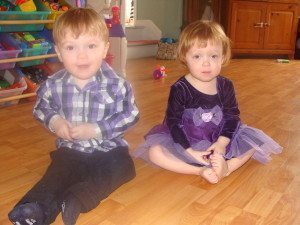 Then the doctors found that my daughter wasn’t growing as fast as she should have been. They couldn’t get a proper measurement of all her body parts because she was so low on my cervix so they said she might have some sort of dwarfism (it turned out she didn’t).  But my son was taking most of the nutrients and she wasn’t moving very much, so at my appointment at 31w3d, my water broke on the doctor’s examining table as he was calling the hospital to tell them that I would be coming over to have the babies.  We were sent over for an emergency c-section which happened fairly uneventfully.  The babies spent 7 and 8 weeks in the NICU learning to breathe and eat on their own.

As far as paperwork after the babies were born, since we were married and Maryland recognized our marriage, we didn’t have to do anything legally so that Michelle would be the babies’ legal parent.  They put her name on the birth certificate with no questions asked, although she was listed as the “Father”. 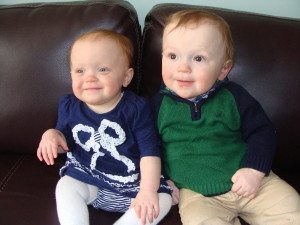 But I worked in the legal field and I have seen too many issues where one parent gets sick, etc., and the babies get adopted by someone else in the family.  So we decided to do a second parent adoption.  We visited the attorney while I was still pregnant so he got the paperwork started early.  I think the babies were like 6 or 7 months old when we signed all the paperwork in court to make it official. Then we had some issues trying to get their birth certificates changed so that she was no longer listed as the father, but as mother or second parent.  We are still working on that one. Right now the certificates on file have her listed as mother, but my name has been taken off completely.

My advice to other LGBT couples having babies is to find an attorney early and pay them a visit as soon as possible.  They will give you a list of items you will need to include with your adoption application. Although most of them are things that you will find out after the babies are born, it’s one less step later. And the attorney can draft the adoption application ahead of time, inserting the babies names later.  Be persistent on getting the children’s birth certificates to read as you would like. Most states are able to change them. It’s only a matter of whether or not they will.  We also made up wills, power of attorney, etc. to leave the children to the other parent if something should happen to one of us.  We wanted to have all of our bases covered if something should happen. 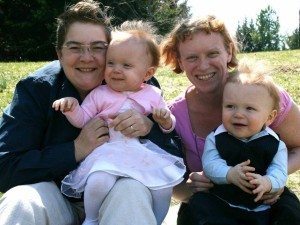 Another piece of advice is to try to find an LGBT group of any sort in your area to join. Some cities even have LGBT parent groups.  It’s probably just my opinion, but I think it will be nice for our kids to know other children of LGBT parents so they do not feel completely different from everyone else. Also, once your kids are a little older, prepare a response for other parents to give their children to explain why your children have two parents of the same gender.  Most people are fairly accepting if you explain things to them without getting offended. And for the ones that are not accepting, steer clear of them and enjoy your family without them 🙂

Thanks for sharing your family story with us, Dawn! As a side note, the Twiniversity forums has a special meeting room for LGBT parents of multiples — and our forums are FREE!

If you have a unique family to share with our readers, email us at julie@twiniversity.com.

There are some great children’s books out there for lesbian moms. Click here for an Amazon Listmania List!