Home » Why half birthdays rescued me from the looney bin. 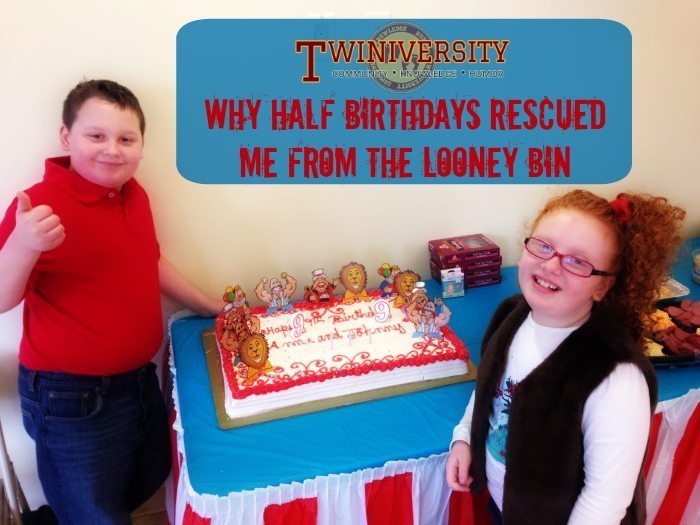 When my boy/girl twins were turning seven all heck broke loose in regards to parties. One kid wanted a train party and the other one wanted a My Little Pony party. No discussion in the world could convince either of the twins that the other’s idea was better. For many years I had always come up with a generic birthday theme: barnyard, Mickey Mouse, carnival, cooking, pottery, etc. And yes, we always did have a party. Small-scale or large-scale, we are family that loves to celebrate!

For us, the twins birthday is even more special because it’s also my husband’s birthday (yes, I’m the best gift giver that ever lived.) So typically in our house the Diaz family birthday is pretty nuts. Oh, I forgot to add that it’s two weeks before Christmas. My tiny New York City apartment turns into Presents Central.

So back to the train party/My Little Pony party fiasco. That was the year that I decided that the twinnies didn’t have to share their birthday anymore. True, someone would always have to share it with my husband, but they would have a say about type of party it would be and who would be invited. 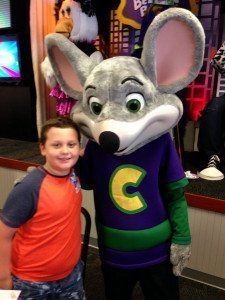 That was the year we started celebrating ½ birthdays. My boy twin started first. He wanted a Chuck E. Cheese party, so he had one. Very small, tons of fun and, yes, the ticket blaster was involved! SO that means for their REAL birthday my girl twin got to have the decision over the theme. BUT (there is always a BUT isn’t there?) it couldn’t be too girlie. He couldn’t be embarrassed to be there.

To clear this up:

On their HALF birthday: ONE child gets to have a party. The twin celebrating has TOTAL control over the place/theme etc. It could be anything from a manicure party (my daughter’s pick for her 1/2 birthday) to the Train Museum (my sons’s pick for his 1/2 birthday party). We rotate each year who celebrates their 1/2 birthday, so it’s every other year for each twin. The twin NOT celebrating their 1/2 birthday still gets to invite ONE friend but that friend comes more for a “play date” than a party. I explain to the parents that no gifts are necessary and it’s been understood every time so far. The birthday twin gets their own cake. Blows out their own candles and we sing just to that twin.

On their ACTUAL birthday: BOTH children (and my husband) celebrate, BUT the place/theme/invitation list is chosen by the one that DIDN’T have the half birthday. There is a disclaimer though. It has to be somewhat gender neutral so that the other isn’t embarrassed to be there like before. This is more of a typical birthday and they do both celebrate, they do BOTH blow out the candles, we sing to BOTH of them (all three of them actually).

I was amazed at how sensitive the other became at choosing the events of their party. It was SO much better than before. The twins now help each other plan their parties, there is no more fighting, and peace has been restored during birthday time.

Does this mean double the cost? Nope, I keep the parties half as big.

Does this mean double the cake? Ummmm yes, is there a problem with that? It’s actually triple the cake for us, that’s my husbands only demand, he gets his own cake. I can’t argue with that.

Does this mean that their friends have to bring double the gifts? Nope. Many years back I had a talk with the parents of my kids close friends and explained how the twins never needed a gift each and that one gift they can share was MORE than enough, if anything. And typically for ½ and real birthdays, different kids are invited so no one feels like they have to bring two gifts a year but there are a few that come to both! The kids that come to both are their “inner circle” as I call them. I’m close enough to the parents to just tell them to skip gifts for one or the other. I’m lucky that I’ve become such good friends with their friends parents.  If you don’t have BFF type relationships with your kids friends parents, then perhaps make a separate guest list for each party.

Does this mean double the planning? Unfortunately, yes, but as they get bigger, planning seems to get easier. In NYC we don’t have a backyard or an apartment big enough for a large crew, but we found a community room for $20 an hour nearby and have it there. The kids want to be together more than they want stuff, so planning has gotten a lot better!

The moral of the story is that each of the twins wanted their “own” time. They were tired of sharing their big day and to be honest, I can’t blame them. This gave them each a time to celebrate in their own special way with their own special friends. Who can argue with that? 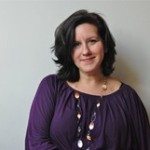 Check out Nat’s book, What To Do When You’re Having Two and learn more about Nat here.