Home » Weaning From Breastfeeding to Sippy Cups at Age 1 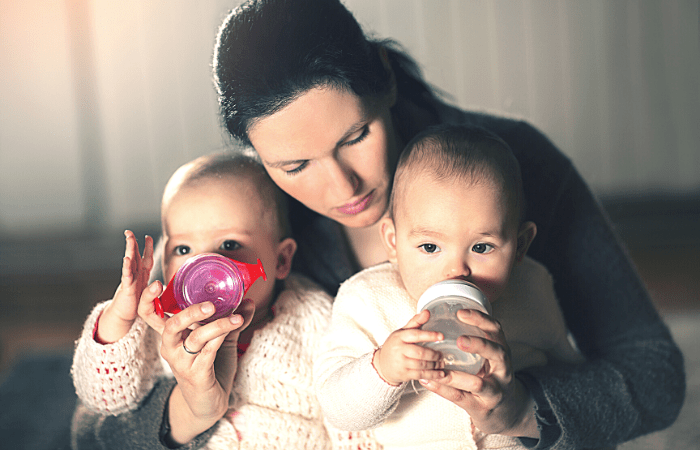 A MoM asks, “My fraternal boy/boy twins are turning one year old in a week and have been exclusively breastfed. Can you give me tips on how to start other forms of milk? How do we begin weaning from breastfeeding? They won’t take a bottle when they are sleepy.”

Here’s what our Twiniversity fans had to say!

– My breast fed (13 months) b/g twins never drank any other milk. Went from breast milk to water, in a cup, and are extremely healthy. They are now 6 years old and still only drink water. Maybe you don’t need to have them take any other milk…just a thought.

– My twins will be 13 months next week. I still nurse often throughout the day but offer whole milk during meals and snacks in a sippy. I plan to follow their lead as far as weaning goes but I just don’t know what to expect either!

Weaning from breastfeeding is different for everyone

– I gave mine water in a sippy cup (never had a bottle), always accessible during the day, and at all meal times, even to play with (a little water on your floor won’t hurt it a bit) so they’d get used to it. Eventually, we started trying cow’s milk… I had to ‘bribe’ them initially with a little flavor in it to entice, but eventually weaned them off the flavor and they now all love love love milk. But, they have only ever had milk & water. I wouldn’t start any juice or other sweet drinks if you can help it.

– I start with a cup of milk at mealtime – just a small amount. Cup training really. I too wean at a year to a cup. I only put milk in a cup, breast milk, or formula in a bottle. I find it cuts down on confusion and setbacks. As they get more proficient with the cup I drop one feeding a week and replace it with a cup at mealtime (breakfast, lunch, snacks, dinner). I put milk in the cup – just a small amount at a time – increasing the amount as they get better at drinking. I just use plain old Tupperware (or First Years) cups. No valves – just a sippy top. When they start throwing it I take it away, set it on the counter, give it to them to drink – put it back on the counter. These cups are great because you can help them tip it up if they need manipulation and press on the top to make the milk come out if they need help learning to suck on it. As they get good with drinking I give milk at meals, water between meals once their meal time milk is gone. I also give one cup of milk then switch to water at the meal if they want more. That said… if they drink their milk, then their water, and want more milk, I do give them that. I just am careful not to give milk, milk, milk all the time – they need water too. They won’t drink as much milk as they do breast milk or formula, as their nutrition comes mainly from foods now. Less breast milk or formula and more food and believe me… they WILL eat a TON as you wean them during their 1-year growth spurt.

Find what works for your family

– We went straight to sippy cups with breast milk (both our guys refused all bottles at two months), practiced in the bathtub with drinking water…to help keep the mess down. They were 15 months when completely weaned, but had been using pumped milk in sippy cups (the ones with silicone tops like bottle nipples, but sippy style) before weaning completely. They didn’t seem to notice when we went one feeding down a week to cups, but the nighttime feeding was the last to go and the hardest — only because that was the only time we didn’t tandem nurse (probably reading my signs of sadness over it too). By then they knew how to drink from the cups and it was still breast milk, just pumped, so I still held them and snuggled with them but just had the cups instead of nursing, after two or three days they were fine and adjusted. Eventually, we transitioned from breast milk to cow’s milk by half-and-halfing it for a week or so. Good luck!

– Our boys were the same way, refused all bottles and pacifiers since two months. we started giving them cups to play with in their bath, it gave them a chance to figure them out and when they started to actually drink the water and not spill it everywhere we gave them sippy cups with drinking water in the bath…helped a TON! They transitioned to the soft silicone type sippies really well. That and teaching them how to suck from a straw (start by holding your thumb on one end and then slowly release so they get a little drink, eventually they try to suck it from the straw to get you to release the water/milk.)

– With my exclusively breastfed kiddos (unfortunately not all of them went a full year) I just never did a bottle. Straight to a sippy cup. I always did like a previous poster said and start with a mixture slowly gravitating towards 100% cow’s milk. With my extended breastfeeders, I did mostly water or water with a tiny bit of juice in it and let them nurse get their milk intake. As they got older and started eating more foods and dairy then milk can just be introduced in the cup.

– I did vanilla almond milk first, then mixed vanilla syrup in 2% milk and gradually reduced the amount. Went straight to sippy cups but they were never fond of the bottle anyway. I moved away from nursing right before bed. The last session I gave up was the middle of the night wake up so that it wasn’t really tied to any part of the day’s routine.

– As long as they are not sensitive (mine were) take 2 oz of the milk you want to switch them to and 8 oz of your milk and mix it, and every few days add more and more until they are on all milk! That’s how our doctor had us do it. If you notice stomach problems in their diapers for a week or longer, talk to your doctor and maybe try them on soy milk.

Did you stop breastfeeding when your babies turned one? And how did you transition from the breast? Please share in the comments!

How I Weaned Twin Two-Year-Olds Off Breastfeeding

The Quest for the Perfect Sippy Cup

Why did you stop breastfeeding?

It Wasn’t My Choice to Stop Breastfeeding