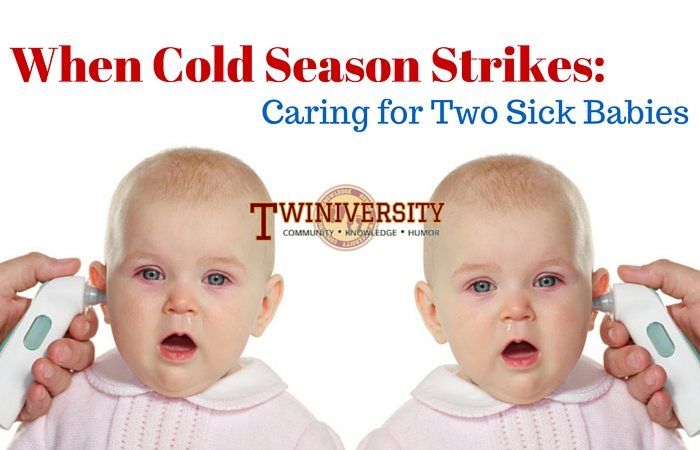 Sometimes sharing my home with three boys under three years old so closely resembles living in a frat house, it’s scary. They’re constantly drinking, staying up all night, vomiting on my carpet…and that’s on a good day! But when the kids are sick it takes things to a whole new level for every parent, and as parents of multiples we get hit at least twice as hard.

Have you ever had one of those days that got off to a terrible start? So terrible you wanted to just get back in bed and start all over? Well, as a parent that’s not an option, so you just have to plow ahead and do the best you can. For me, this day was December 29th, 2014. Thanks to my son Danny’s reflux, I’d already had one wardrobe change in the wee hours of the morning, and upon waking I discovered my husband had a 103 degree fever. Not wanting to get the babies sick, I exiled him to my mother’s house until I could be sure he wasn’t contagious. I was only two months into the twin parenting adventure, so I was still feeling very green. But I was going to have to tackle the next few days solo.

Shipping my husband across town was a desperate and unsuccessful move. As the morning progressed the babies started acting fussy, clingy, and developed a fever. What do you do when two little babies both need you and want to be held at the same time? And scream bloody murder when you even look like you might be thinking about setting them down? Even if they’re asleep?! Even after you give them Tylenol?! All the fussing made Danny’s reflux worse so I eventually gave up on changing clothes because my postpartum wardrobe wasn’t big enough to accommodate that many outfit changes. I settled into an attitude of simple endurance as I watched myself gradually morph from mom to human burp cloth. Then the diaper blow-outs started. And the naps stopped. And the pacifiers weren’t pacifying. I was starting to feel jealous that my husband was lounging around my parents’ house with nothing to do but rest, watch TV, and drink fluids. I wasn’t sure how, but somehow he was going to pay for this. 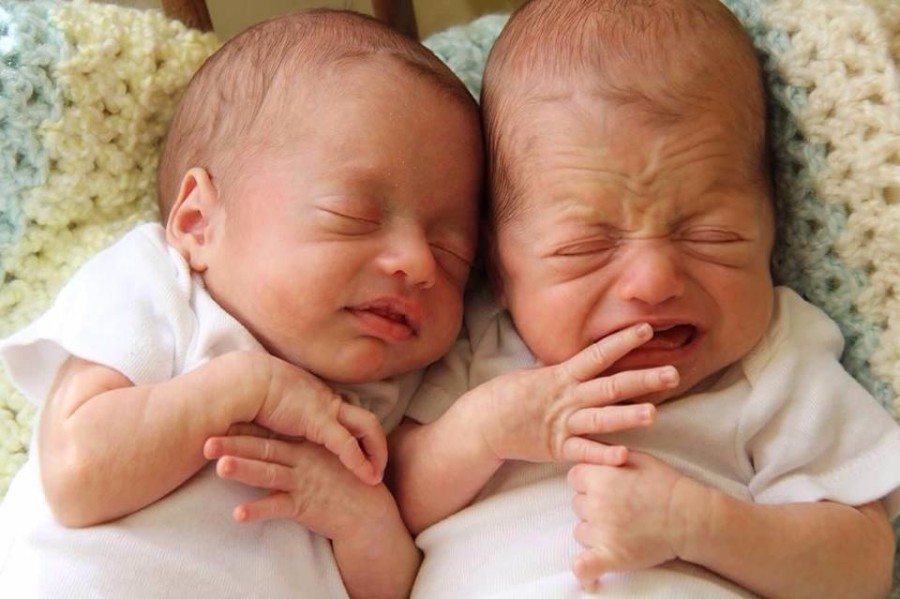 I was so lucky my mom called to check on me and the kids. She didn’t believe my brave façade over the phone and came over to help despite my protests. Even as a parent myself, I still hate to admit when my parents are right so my mom is not allowed to read this. With her help, we survived to bedtime and after finally getting all 3 boys to sleep, I settled down for a well-deserved rest for a few hours until they needed to eat again. My mom decided to sleep in the guest room just in case, even though I insisted everything would be fine now that they were asleep. She must be psychic. Or maybe it’s just because she’s done this whole parenting thing before.

Not even an hour after we made it to bed we were woken up by Danny’s cries. He was inconsolable, gassy, and had another diaper blow-out, so I took him downstairs to clean him up, calm him down, and hopefully let everyone else keep sleeping. Yeah, that was a nice idea. His twin, Andrew, woke up a short while later for the same reasons.  My mom and I rocked them, bounced them, swaddled them, shushed them until we were blue in the face, sang to them, cried with them…and when we were both about to completely lose our %*$# we heard a little voice from upstairs. Yup, now my two-year-old son, Nathaniel, was awake too. We couldn’t put the babies down, I couldn’t put my toddler back to bed with a screaming baby in my arms, and Nathaniel made it clear he wouldn’t go willingly. He wasn’t going to be left out of the all-night party we were apparently having! We decided to play man-to-man defense with the twins as my toddler ran around the living room singing songs and playing with his toys, completely oblivious to the tension and anxiety in the room. 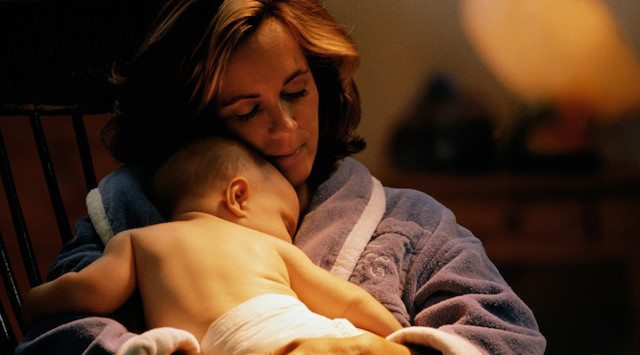 We held the babies while we played with Nathaniel and they calmed a little as they watched him. He was the perfect distraction for all of us and as the tension eased the babies seemed to calm down too. We still had our rough moments, but once we accepted that we couldn’t force them to feel better and that we would all survive the night, things became significantly better.

We finally made it to bed at 6:00 the next morning and everyone slept for a few hours. The next day wasn’t great, but it was better. I was able to keep the babies fairly happy by using a baby wearing shirt, the swing, and the Tylenol finally seemed to have an impact on their discomfort. I sent my mom home for some much-earned rest. When my husband returned on the third day, I was wearing one of his shirts because mine were all in the washer, the floor was covered in toys and burp cloths, the dishes weren’t washed, there was no grown-up food in the house, and I hadn’t showered in two days, but I had survived my first real test as a parent of multiples and while I was sure it wasn’t the last trial I’d face, I’d learned a lot to prepare me for the next one.

1. Ask your pediatrician for a list of symptoms they feel are serious enough that your children should be seen. This will save you a lot of anxiety about whether to treat at home or bring them in, especially since babies seem to prefer getting sick over the weekend when you can’t call the office. You don’t want to be the mom who brings her kid to the doctor every time they sneeze or the one who lets them develop pneumonia before taking them in.

2. Have the basic home treatment supplies in your medicine cabinet at all times. Kids don’t give you 48 hour notice when they’re going to come down with something and you do NOT want to run to the store with sick babies in tow. I like to keep Tylenol, Motrin, nasal spray, and gas drops as well as a thermometer.

3. If there’s anyone in a hundred mile radius who might be willing to come help, ask! The number one thing sick kids want is to be held and cuddled and with multiple babies and one you, lap space is limited. Another set of hands to comfort them is very helpful, or if they don’t want to get sick they could come to help with dishes, laundry, cooking, etc. and help take care of you while you handle the babies. Take anything you can get! 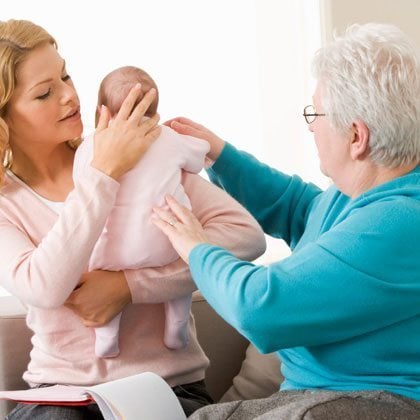 4. When things are especially bad, I go into “survival mode.” At our house, this means we do only the bare essentials. We make sure everyone is fed, diapered, and as comfortable as possible. And that’s about it. Non-essential laundry will wait, cleaning can wait (unless there’s been a diaper blow out), we nix the home-cooked meals and opt for cereal, canned soup, or have pizza delivered. We lift the restrictions on TV time and give cribs the old college try, but if they need to sleep on our chests to get sleep, that’s what we do.

5. Take turns. If you’re lucky enough to have help, take 3 hour shifts so one person can eat, shower, nap, etc. while the other takes care of the babies. You will both feel much better for it. It’s exhausting and stressful when you’re flying solo, but knowing you will have a break soon will help you persevere and you will have the opportunity to recharge a bit.

The best advice I can give any parent, and especially a parent with multiples, is to set REALISTIC expectations and develop a sense of humor. You can’t control what things life (or your children) will throw at you, but you can control how you respond to it. Try not to set your expectations too high or you will be chronically disappointed. You will find yourself in many situations in which you know you’re going to laugh or weep, and I highly recommend laughing. Children are sensitive to their parents’ emotional state so if you’re upset and tense, they will be too. You will have unpleasant moments, but know that they are only moments and in the big picture of your children’s lives, it’s a fleeting thing you will look back at and laugh about some day, even if you can’t today. So the next time your kiddos are sick, grab some good movies, a cozy blanket, some children’s pain reliever/fever reducer, and your sense of humor. Because laughter really is the best medicine. And even if that fails, there’s always wine. 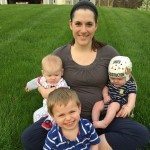 Diana Schneider is still alive and raising her three boys near Ann Arbor, Michigan. She did eventually forgive her husband for getting sick and abandoning the family in their hour of need and he has since made up for it by proving to be a wonderful dad, when he’s healthy.

Making Doctor Visits a Positive Experience for your Kids

The Doctor is In: 8 Tips to Fight a Stomach Virus

Common Cold, Pneumonia, and Flu – When Should I Call the Doctor?