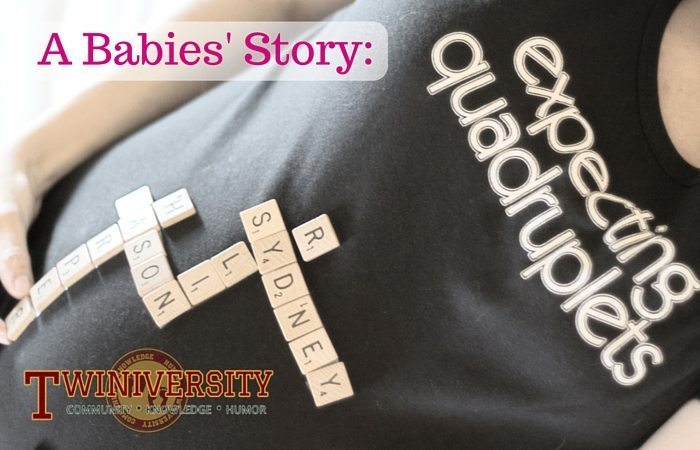 Over a four year span, my husband, George, and I traveled the painful, frustrating road of infertility. After the first few years, we finally sought help from a reproductive endocrinologist (RE). Our RE recommended we try IUI (intrauterine insemination), which is considered a low-tech procedure that is affordable for most families. The first two procedures were total failures. We were overjoyed when the third resulted in a singleton pregnancy. At the first ultrasound, our RE detected a strong heartbeat and noted that 96% of the time the baby is delivered full term. One week later, I confidently went alone to a second ultrasound where I learned that we lost the baby. George and I were devastated by our loss especially with the impending holiday season. We didn’t know whether our baby was a boy or a girl, but the loss unexpectedly resulted in heavy grief. It was the loss not only of a baby, but of our dreams of having a family. After a lot of prayer, we headed to Mexico over the week of Thanksgiving to reconnect to each other. 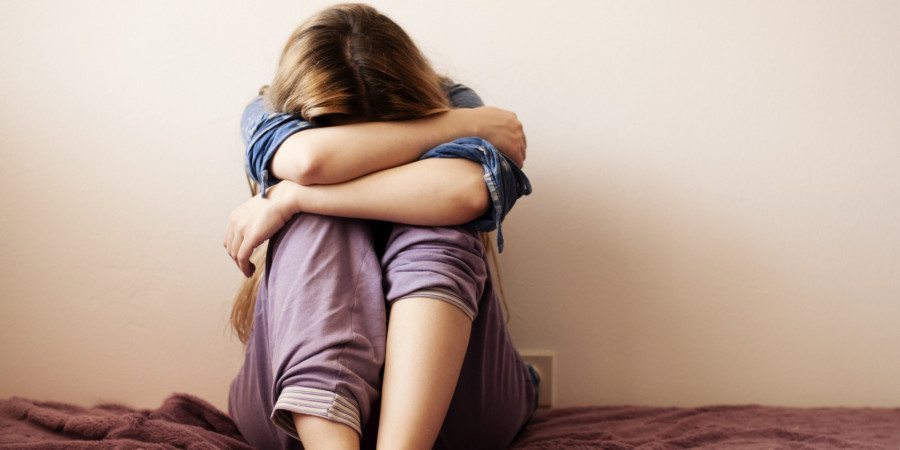 Our last minute getaway resulted in a crummy resort and we doubted our decision to skip our traditional holiday gatherings. The first night of our trip, I prayed for solace and hope that we would someday build a family. Sleep eluded me that night and we were up at sunrise. By 7:00 am, we had already eaten breakfast and began a long walk along the beach. Shortly into our stroll, we noticed a crowd forming for no apparent reason. As we approached, we immediately realized there was a clutch of sea turtle hatchlings beginning the journey to the sea. As I saw these tiny sea turtles make such a treacherous journey, an overwhelming sense of calm washed over me. Thankfully, my aviator sunglasses concealed the warm tears streaming down my cheeks. The scene unfolding in front of my eyes was incredible and I felt as if God was whispering directly into my ear that yes, we would someday have the family of our dreams. My hope was restored and I was ready to try again. When I rehashed the story of the sea turtles to a friend, she told me that sea turtles are symbols of motherhood and fertility. I felt reassured in our decision to proceed with a fourth IUI. 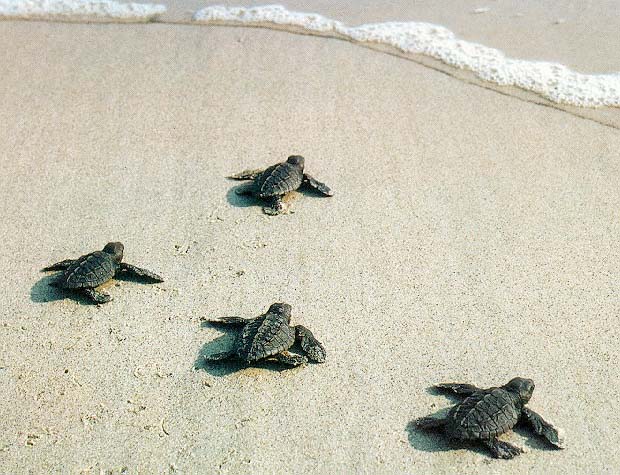 On New Year’s Day I underwent my fourth and final IUI full of hope. I vividly recall our RE saying our chances of multiples were very slim considering our previous failures. Based on ultrasounds, I appeared to have two mature follicles that were likely to ovulate, and two immature ones that were not expected to ovulate. Two weeks after the procedure we were elated to discover a positive home pregnancy test. Six weeks following the IUI, we went to our clinic for our first ultrasound hoping to see a healthy heartbeat. We were stunned when the computer screen revealed not two or three dark circles but FOUR, all with healthy heartbeats! Our RE appeared slightly flustered by the revelation and left the two of us alone to simmer on the news. As soon as we were alone, I glanced at George and said, “We are meant to have quadruplets. Do you recall how many sea turtles we saw? FOUR.” Each of those fragile sea turtles made it safely to sea and I knew our tiny babies would all survive their treacherous journey as well.

Our RE explained the many risks involved with carrying high order multiples which included short and long term disabilities, premature birth, and even loss of one or more of the babies. We made it clear that we were prepared for these possibilities and our doctor respected this, never suggesting that we reduce. The pregnancy was closely monitored for the first trimester by the RE with weekly ultrasounds. After the first trimester, I was immediately referred to a perinatologist with experience caring for higher order multiples, including several sets of quadruplets. Due to the high risk nature of my pregnancy, I went to the doctor every two weeks initially, and eventually weekly and then bi-weekly. At each appointment, my vitals were taken and then there was an ultrasound to check each of the babies. I’m told that mothers of singletons only get about three ultrasounds total, which boggles my mind. I could hardly wait to see the foursome each week, and seeing them gave me a piece of mind that things were going well. 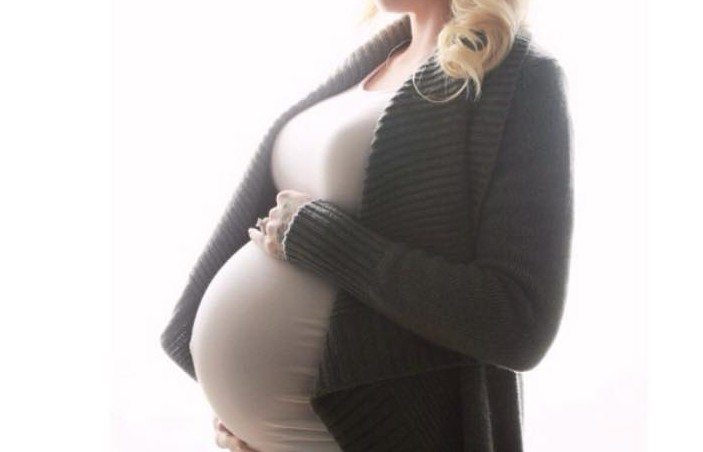 During the first trimester, my biggest challenge was consuming enough calories to satisfy myself and each of the babies. I was hungry almost constantly and if I didn’t eat enough, morning sickness overcame me. I easily gobbled the recommended 3,000 calories daily. Despite extreme fatigue and a ravenous appetite, I managed to work full time into the second trimester. By 21 weeks I began experiencing regular contractions, which landed me on strict home bed rest. I experienced these lovely contractions on a nightly basis at the rate of about five per hour from 6:00 pm to midnight. The only place I found relief was in a warm bath while reading magazines, which resulted in a hefty water bill. I attempted to fill my bed rest days with novel reading, online shopping, and binge-watching Netflix, but it was no vacation. Bed rest is H-A-R-D. The highlight of my week became my doctor’s appointment since it was my sole opportunity to get fixed up and leave the house. Around 24 weeks concerns developed for Baby C who was growth restricted, and I was certain we’d deliver for her sake. At my 30 week appointment, I was given a round of steroid shots to help develop the babies’ lungs (I suspect my doctor knew delivery was imminent).

When I went in for a routine appointment at 30 weeks, four days, I felt odd and didn’t know why. My blood pressure spiked and I developed preeclampsia. Within 12 hours, I found myself being prepped for surgery. Delivery day was a surreal experience for me; I can recall many details of it, but it was much like an “out of body experience”. Thanks to the organization and preparation of our delivery and NICU hospitals, my c-section was later described as “the smoothest of the day.” All four babies were delivered within three minutes and transferred to the adjoined children’s hospital within about 20 minutes. It was a challenge, but I was taken to see them via hospital bed a few hours later. 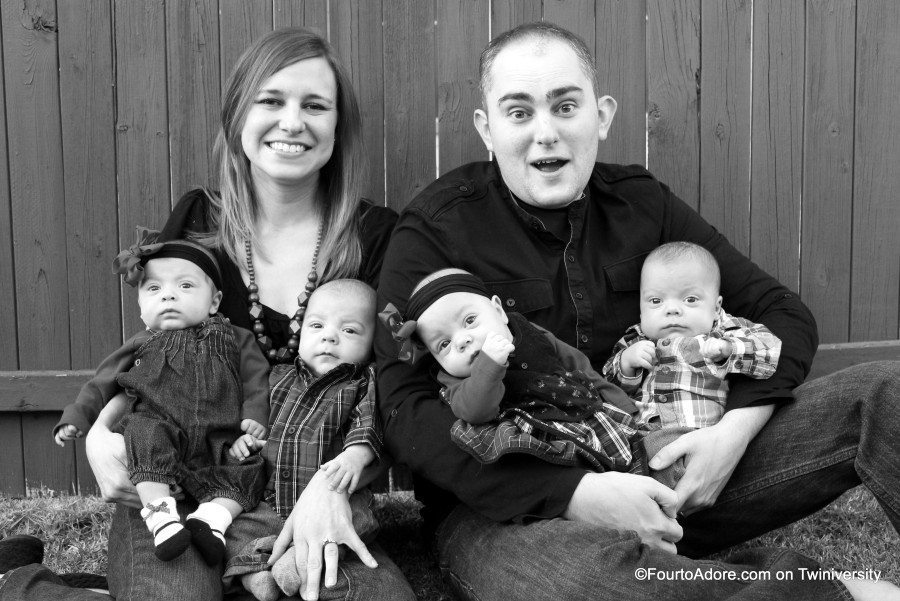 After a six week stint in the NICU our first baby came home and within the same week the next three joined him. I never could have fathomed our life raising quadruplets and believe it is our greatest challenge and joy. 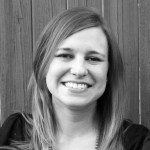 Amber Shawver and her husband, George, are the proud parents of girl-boy-girl-boy quadruplets who debuted in 2012.  Amber draws from her experiences working in childcare settings and as a school based behavioral consultant to manage raising quadruplets at home. Amber continues to practice school psychology part-time in an urban school district.  She chronicles life raising quadruplets at www.fourtoadore.com You can also find her on Facebook, Pinterest, and Twitter. For more articles on Twiniversity by Amber, click here.

A Babies’ Story: Cholestasis of Pregnancy

A Babies’ Story: A Twin Birth Through the Eyes of Daddy

A Babies’ Story: Placenta Previa, Graves Disease, and the Little Mama That Could