Home » What’s The Best Childcare Option For Your Twins? 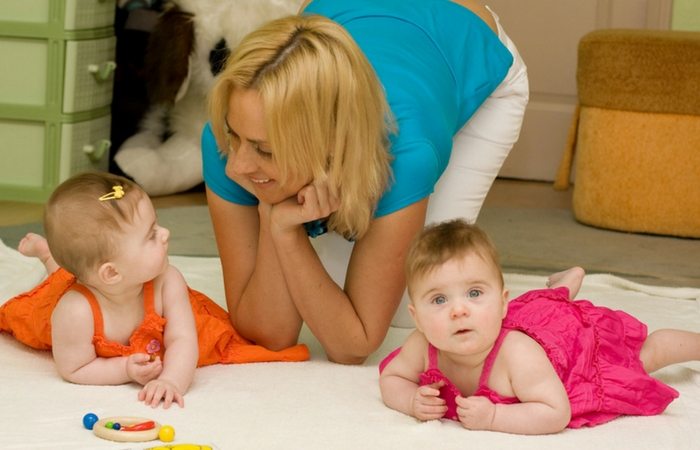 My twins are 7 months old and I am having a hard time deciding to put them in daycare or hire a nanny for when I’m at work. I know I have to do what’s best for my family but advice would be appreciated. What did you do?

Here is what our Twiniversity fans had to say:

– We chose a nanny. My twins were born almost 6 weeks premature, so we wanted to avoid exposing them to too many germs at a young age. Plus we felt that they would get more one on one attention from the nanny, and she helped out with laundry, bottle washing, light housekeeping, and meal preparation.
– We love the daycare we have our twins in. We had a nanny for about the first year before we moved to the daycare. The difference we have seen is unbelievable. They are more socialized, come up daily with art projects, have pool days in the summer, and each week is a different theme that they learn about. Our daycare has a Facebook page so I even get to see the kiddos in action with the videos and pictures they post daily.
– We looked into a nanny at first, but I liked that with daycare my girls could get out of the house and do different activities/play with different toys. They just had a petting zoo come to their school a few weeks ago. They also have picture day twice a year and have so many little buddies. I just can’t say enough good things about daycare 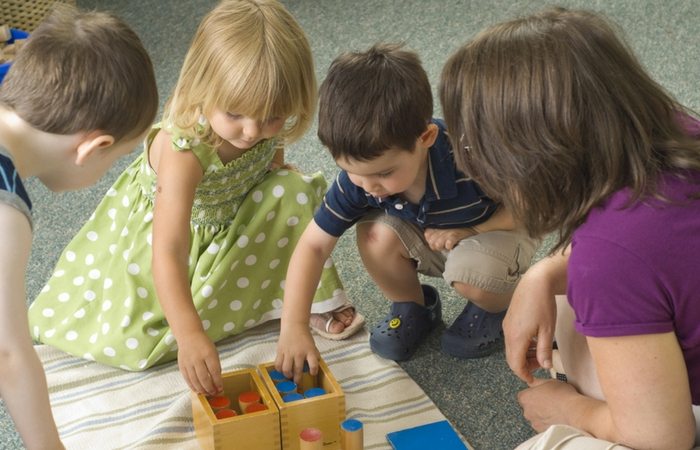 – There are pros and cons to having a nanny. With a nanny, you can leave the house by yourself without having to pack food, clothes, belongings, and the children. It’s pretty much germ-free. But, the house might not always be as clean as you left it and if the nanny doesn’t drive with your children, they could be stuck inside all the time. A nanny could call out at the last minute or show up late.
– We used a nanny until ours were 2 1/2. I liked that they could be home, not be around sick kids and it was the same price. Now they are in daycare and learning so much. We chose a location with a webcam so we can watch to see how the day is going. There has been some transitions they needed to get used to like set eating times and more noise during naps. Happy with both choices.
– I would hire a nanny. Your children will get more individual care from a nanny; they will be the focal point. Daycare sure can be awesome on its own. However, children don’t always get the attention they need. I was a nanny for 8 years prior to being a mom of twins and I was able to give all of my attention to the kids I cared for. Also as a nanny, I was able to help the parents with light housework making it possible for parents to have family time and focus on their children in the evenings after work!
– I went back to work when mine were 7 months old too, and we put ours in a private in home licensed daycare with a family friend. Plus because it is a private in-home daycare she only has a maximum of 10 kids. Our twins are the only babies she has, the rest are toddlers or school age and only there before and after school. We feel that they are very well taken care of and we are extremely lucky to have someone we know and trust and who lives only 2 blocks away from our own house. 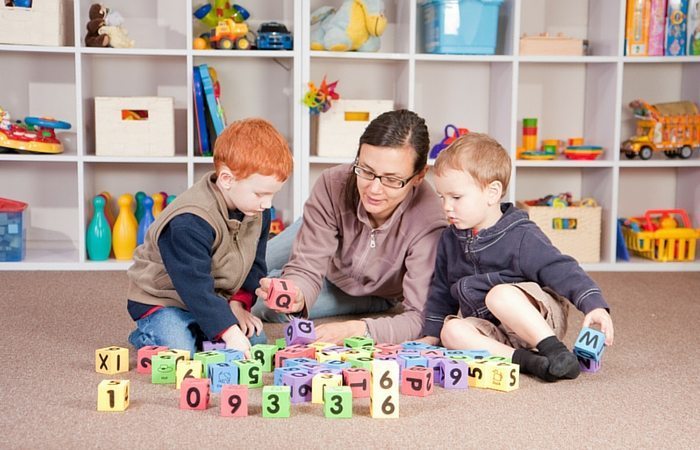 – We had an older boy who was cared for by a nanny we had hired when he was 1 year old. Three years later when our twin girls were born, we had her start watching them, as our boy entered Montessori. For us it was much more affordable to have her watch them, as my husband and I work opposing schedules, we only needed care for 15-18 hours per week. I was against daycare because it is so expensive where we live, it would have made no sense for me to work.
– It depends on your comfort level and what your needs are. My biggest worry with my now 6-month-old twins was that if they stayed at home with a nanny, would they get the same stimulation and developmental support they would have received if they went to a daycare center? Also, think about cost. Is having a nanny more affordable than a daycare? Trust was also a big issue for us. Weigh out the pros and cons for you and your family. Everyone has different needs and wants.
– We really wanted a nanny when they were smaller and felt having them at home in their own environment would be the best. Unfortunately, we couldn’t afford the cost and ended up taking them to daycare. I honestly feel it was the best decision for us. They have so many friends and are more social now. There isn’t a right or a wrong. Just research and see what works best for your family.
– I love having my twins in daycare. They are excited to come home to see their toys which buy me time to make dinner. I also like that if I’m done early from work and stop home, I can use that time to get things done and the kids aren’t already dragging on my legs and the nanny isn’t looking to leave just because I walked in the door.
– We chose to go with daycare because we thought there was greater accountability. Also, if a staff member gets sick, they have coverage (so we don’t have to scramble). While I liked the idea of having a nanny, I do think there is a certain level of control that a nanny has over the family/children, that a daycare staff member would not. If you were to hire a nanny, I would suggest finding someone who has very similar views on raising children (since this is the one person your twins will be exposed to while you are working). All of that being said, I don’t think that there is a wrong answer to this question! It is a tough decision. I’m sure whatever you decide will be right for you. 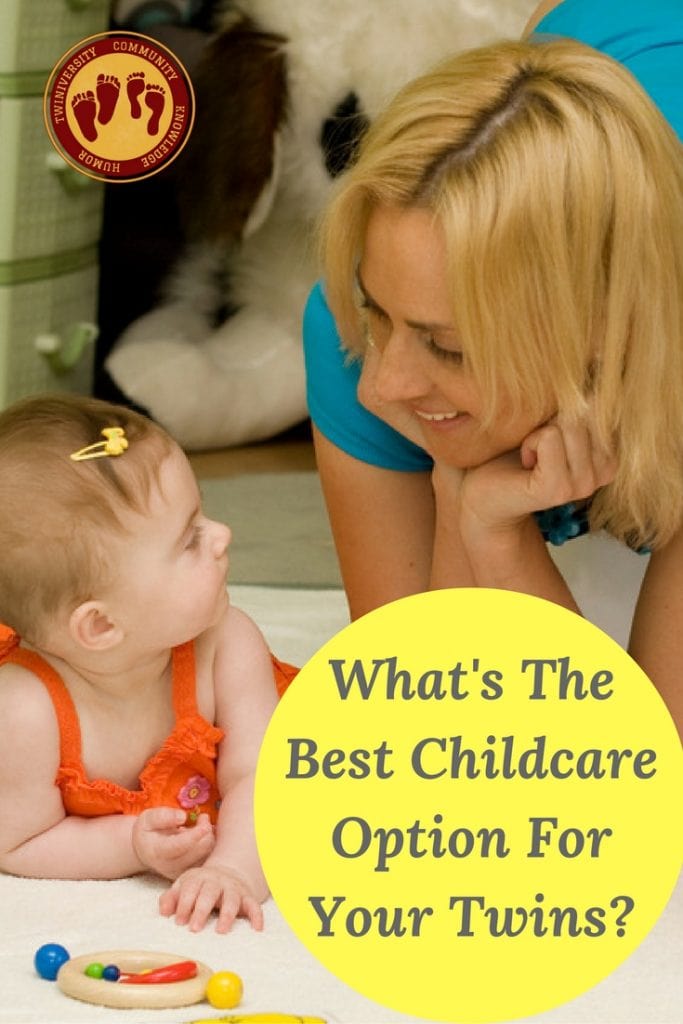 – My twins are 7 months old and I chose a nanny. I need to be at work early and I don’t have time to feed, dress and get them out in the morning. Our nanny watched them when they were sick. If they had been in daycare, they would not have been able to go.

– We put our girls in daycare for a couple of days a week at 12 months, but took them out three months later and hired a nanny. They were sick so often that it was like not having childcare at all, and we got sick too. We’ve started them back at daycare at 2 years old. They seem much more ready now.

– We went with a nanny. For backup, we got a membership to a local nanny agency in case something happened with the regular nanny. Membership to the agency was not bad and covers us as I am out of town for two weeks at a time.

The Ultimate Daycare Guide: Finding The Best Center For Your Twins

Having Grandma As A Nanny

Where To Find A Good Nanny