Home » The Baby Pinks: My Experience With Postpartum Euphoria 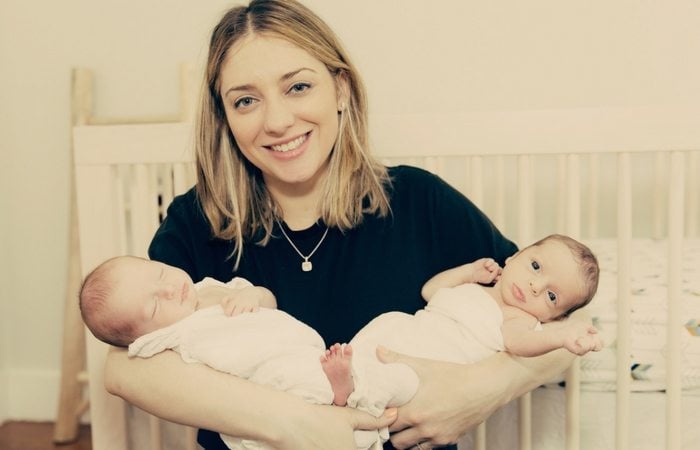 When I went through IVF, I worried that the hormones would wreak havoc on my mental and emotional health, but I remained surprisingly steady throughout the process. I had the same fear about pregnancy, but I made it to delivery at 37.5 weeks without any major mood swings (at least, no more than usual). And when my boys arrived in June 2015, I braced for the possibility of postpartum depression, preparing myself to differentiate between the “regular” amount of being overwhelmed and an unhealthy chemical imbalance. But, thankfully, I dodged that bullet as well. Instead, I was thrust briefly into a chaotic haze I didn’t even know existed: postpartum euphoria, or, more colloquially, “the baby pinks.”

After a C-section, my body was a chemical soup of hormones and pain medication that sent me into a sleepless, manic spiral for a couple of weeks. It was actually not so bad for me. I legitimately thought I had obtained superpowers that made me not need to sleep for days. I wondered if God had secretly gifted me with this ability to take care of twins. With plenty of help from family, I’d lay down for a long nap and pop up 15-20 minutes later to see what I’d missed after what felt like hours of sleep. My body buzzed with nervous energy. I found I could artfully organize cabinets in seconds by whirling my hands like I was playing a shell game. I’d go around organizing things in the dead of night while everyone else was sleeping. 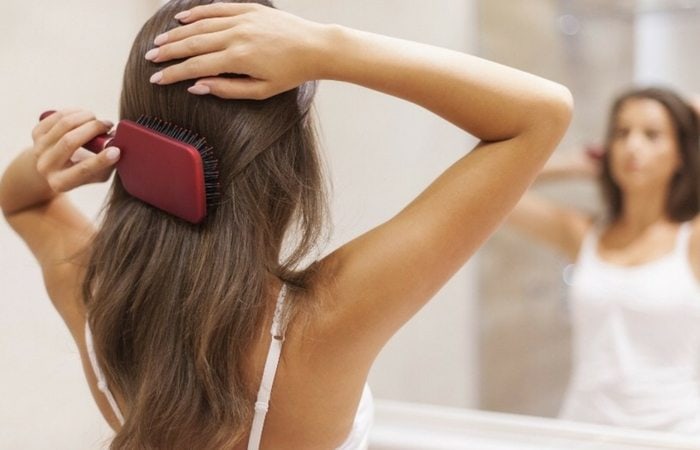 I told anyone who would listen about my new found “spidey senses,” while I perfectly cut an avocado one-handed like a ninja while holding a baby in the other arm. My knowledge recall was instant, I knew every answer on jeopardy and lyrics to songs I hadn’t heard in 20 years. My hair seemed especially luscious and I was very eager to tell people it was luscious. My mind would get caught in thought cycles that I had to share repeatedly with anyone who would listen (the main victims were my husband, mom, and sister).

During one sleepless night, I did some intense Googling to figure out if anyone else had experienced what I was going through, and I found this article about postpartum euphoria. It described my mental state to a “t,” including the super-power belief. I don’t think postpartum euphoria has been officially recognized as a postpartum condition by the U.S. medical or psychological community, but the psychologist in the article likened it to hypomania.

I think a big driver of my experience was insomnia caused by hydrocodone (Vicodin) prescribed for C-section pain. In any case, while I read the article about postpartum euphoria that night, I didn’t see why feeling this energetic and not needing to sleep could be a problem. It seemed like an asset with newborn twins. As I went more days without sleep and became more manic and irritable, my loved ones could see there was a problem. On top of everything else, I was pumping around the clock and ravenously hungry. My husband found me in the kitchen at 6:00 am one morning with a steak and a bowl of cheerios. I snapped at him when he asked me if I meant to prepare steak and cheerios. I was obsessively tracking every pee, poop, and feed on an app, and I’d call family meetings to yell at my husband, mom, and sister for incorrect data entry. They were whispering about me behind my back and I knew it. I also knew things felt wrong. I wondered if I’d ever feel “normal” again or if this was just the new me. 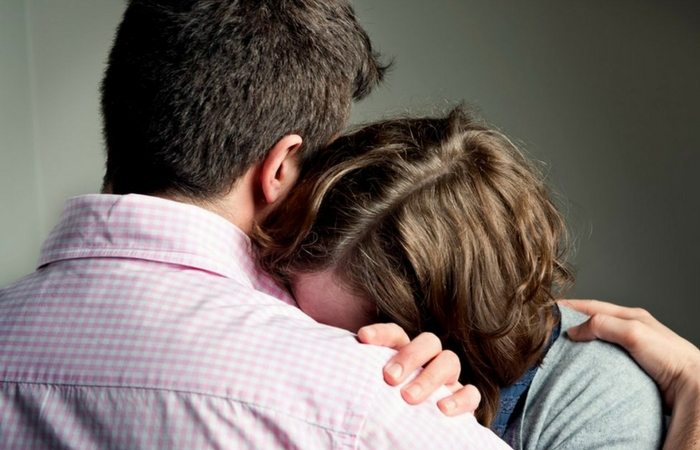 I was having after-pains (postpartum contractions) that would wake me up from my power naps as the pain medication wore off. My body was so swollen and full of fluid that my limbs were numb. One morning I woke up alone, discombobulated, ravenous, thirsty, and unable to move for a couple of minutes. The contractions made me dream that I’d given birth, and I was panicked because I couldn’t find the baby. I yelled and yelled but no one came. I’d angrily recount this episode to my husband over and over again, emphasizing to him that I was “PARALYZED!” and no one came when I yelled.

Finally, my husband suggested that we call my doctor and I agreed. He had me come in right away, and I blubbered in his office while my husband and I described my symptoms. By then, I had figured out the Vicodin was the main cause of the insomnia, and my doctor agreed that I should stop taking it. He suggested that I take an over-the-counter sleep aid to help, and he also prescribed a seratonin reuptake inhibitor, but cautioned that once I started taking it, I’d need to stay on it for six months. I was hesitant about committing to medication for that long, so I asked my doctor and husband if they were okay with me waiting a few days to see if things leveled out after the vicodin-induced insomnia was addressed. They agreed. Thankfully, between stopping the Vicodin and taking the sleep aid, I started sleeping again, and, over the next several days, I started to feel and act more like my old self. 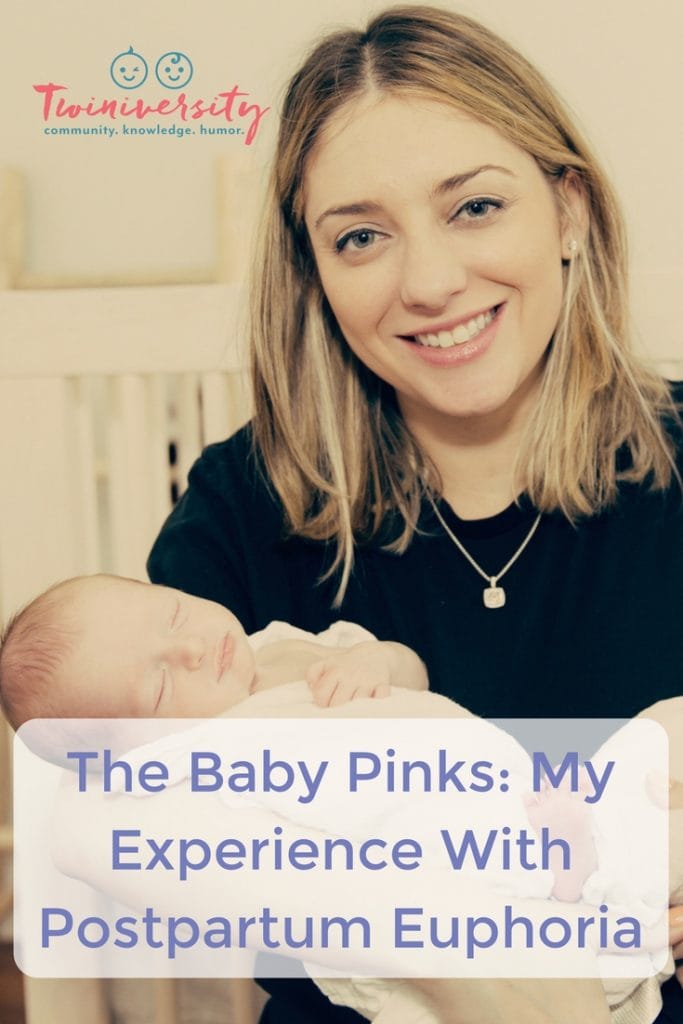 I was lucky to be surrounded by loved ones who could see that my mental state was deteriorating and intervene to get me the help I needed. I was lucky to have a doctor who listened without judgment and helped me find a solution that worked for me and my family. And I was lucky to find an article that at least let me know that I was not simply going crazy. I don’t have any idea how many women experience postpartum euphoria, but given the level of hormones and the rate of C-sections among twin mamas, I would venture to guess that it happens more frequently in our community. I hope that by sharing my experience, it will help other women who experience these symptoms postpartum to identify and address them. Or, if nothing else, I hope you were wowed by my luscious hair and superpowers. 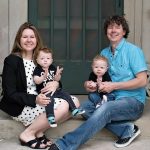 Jade Routson wanted to be either (a) a rock star or (b) a seeing eye person for a blind dog, but she became a lawyer instead.  She lives in the southwest suburbs of Chicago with her husband Ryan and two-year-old twins, Holden and Elliott.

Postpartum Depression: 2 Years After The Birth of Twins

What A Postpartum Doula Did For Me