Home » Despite What You Think, I Actually Love Having Twins 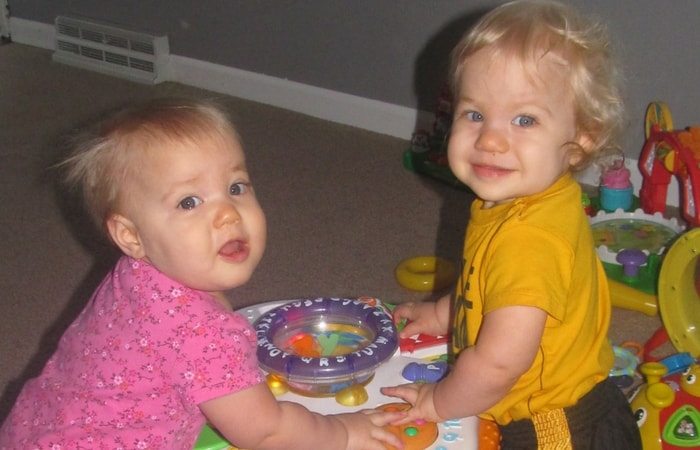 Twins are actually really great. Check out what this twin mama says are all the wonderful reasons she loves having twins, despite what others may think.

I live in a chaotic world filled with yelling, and crying, and begging, and whining. There is the occasional naked child running around and the sweet sounds of, “I pooped, come wipe my butt!” coming from the bathroom. There is usually a scatter of toys for me to step on and the constant fighting over that one toy, even if there is another of the exact kind.

When I go to the store I can be seen giving my kids ’the look’ and the stress and fatigue is written all over my face. One of the comments I’ve heard more than any of the rest is, “I don’t know how you do it with twins.” Usually, I have a sarcastic or negative answer such as, “Lots of wine and coffee,” or “Yeah, tell me about it. Here why don’t you take them and find out?”

But despite all of that, I have a confession I need to make clear right now…I absolutely love having twins, and love that I had them, and wouldn’t have it any other way.

I have always had a fascination with twins, but never in a million years did I think I would have them. And while I thought twins were interesting from an outsider’s perspective I never realized all the different things about them that some people never see. And right there is one reason I love my twins.

From the moment I became pregnant with them to this day, there are so many really cool things I’ve learned and experienced. Like the feeling and knowledge of having two human beings growing inside me. It still baffles me that a woman can carry and give birth to more than one child at a time, and I did it!

Like after they were born and how they interacted with each other, even at just a few days old. Like watching my twins achieve their milestones; their “twin talk” is better than any show I could ever watch on TV. In addition to all these great experiences I’ve had with my twins, there is another confession I have.

I feel like a badass mom. I feel like Superwoman. I’ve breastfed two babies at the same time, I’ve carried two infant car seats in and out of a store. I multitask like nobody’s business and I can change two diapers in under a minute. In the last five years, we have mastered potty training, transitioning from cribs, and preschool.

As my twins get older I know that there are so many unknowns of what to expect, but I get excited to see what’s in store. I’ve started to embrace the fact that things won’t get easier, just different, and sometimes you have to roll with the punches.

I know that some of my reasons for my love of having twins may be selfish. When they were infants I loved the attention I got when going through the stores. While people never looked at me with envy, there was always that look of amazement they had when they saw us out together.

It was always funny, all the questions strangers would ask, as if they had never seen such a thing in their life. Over the last couple years, as my twins get bigger and grow at different paces, people don’t ask if they are twins as often. But there is the occasional curious passerby and it tends to strike up that string of questions.

Now, most of the comments about my twins tend to be in my small group of friends. I never go a week without someone saying, “I don’t see how you do it,” and I just shrug and smile.

Like I said, I never in a million years did I think I would have twins. The thought never crossed my mind and honestly I don’t know if I ever would have chosen that for myself. But I did have twins and it has been a roller coaster of a ride since the moment the doctor said there were two.

While I see the sibling dynamics that most parents do with multiple children, I also get so much more. Having two children of the exact same age opens up a whole new world of things to see. While not all moments are a walk in the park, there is something there to learn from them all.

I feel like I have grown so much as a parent just from daily situations that occur. So, if you ever pass me in a store and see my cart full of wine or the bags under my eyes, just know that I’m still loving every minute of my life.

Or maybe I’m needing a break… or a cup of coffee… you want to babysit for a while?

Marlana Zank is a stay-at-home mom to three kids, including an eleven-year-old daughter and four-year-old boy/girl twins. Let’s not forgot her amazing husband and Luna, the newest four-legged member to the family. Her hobbies include reading, Zumba at the local Y, and a crazy obsession to “Gilmore Girls”, “Parenthood”, and “Supernatural”. Realistic hobbies include laundry, house cleaning, cooking for picky kids, and knowledge of all Disney and Nickelodeon.

10 Reasons Why Having Twins Totally Rocks