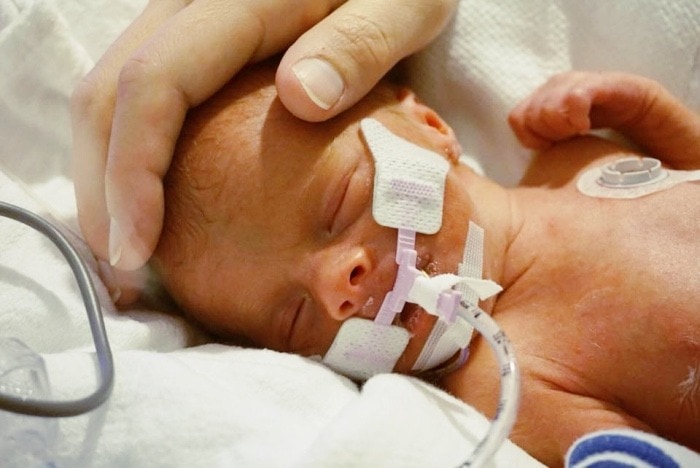 I couldn’t sleep after my twin girls were born. I had just delivered my identical twin girls via emergency c-section at 30 weeks gestation. The c-section followed a string of medical complications and then a NICU stay, and I was plagued with anxiety and fear that something was going to happen to me or harm my babies. I would doze off while pumping and wake up in a panic. The sounds of the pumping machine would trigger memories of when I had been in the hospital on bedrest and the doctor would place the fetal monitor tightly around me to track my babies. Every time I smelled hand sanitizer the fear of being in the NICU engulfed me all over again.

There are some scars that will never heal completely. A traumatic pregnancy or birth, delivering a premature baby, a baby in the NICU, or a terrifying medical scare. There are tiny triggers in our daily lives that can spark the movie to replay in our mind, as vivid as if we were still in that moment. I knew something was wrong but it didn’t feel like postpartum depression—which is the label doctors typically tend to slap on new mothers experiencing symptoms. I later realized I was experiencing postpartum post-traumatic stress disorder (PTSD).

New Moms Are Experiencing PTSD and Nobody’s Talking About It

For most of us, when we think of PTSD, we think of war veterans who were in combat zones or victims of sexual assault. But according to Postpartum Support International, approximately nine percent of postpartum women suffer from PTSD. Unlike postpartum depression, which is specific to new moms and generally includes feelings of sadness and hopelessness, PTSD can actually affect anyone who has experienced a traumatic event. So, for new moms, PTSD may be triggered by a previous history of trauma, any of the events leading up to the birth, a difficult labor, medical interventions, a stressful birth environment, and time spent in the NICU. And even moms with a perfectly typical, happy and healthy labor and delivery may still experience PTSD.

According to the Anxiety and Depression Association of America, PTSD is typically diagnosed about a month following a traumatic event. However, in some cases the symptoms may not appear until several months or even years later. When I was researching PTSD the idea of delayed visible symptoms made perfect sense to me.  As new moms, especially twin moms, once we get home from the hospital we go into survival mode and do what we need to do to survive the day. As moms, we tend to neglect our emotional experiences and put them aside. But this is so incredibly detrimental not only to ourselves but to our children too. Studies have shown that infants with parents who suffer from mental health disorders have shown to have differences in their cognitive, behavioral, and emotional development. We owe it to our children to recognize these symptoms and seek treatment as soon as possible.

Here are some signs for recognizing PTSD:

I’m not a doctor, and in fact, I have no medical background, but I’m a twin mom who went through this and wish I would have sought help sooner. When we experience a traumatic event our memories become scattered, and unless we work through this trauma and facilitate healing those memories will disappear. There are memories from when my twins were little (aside from the first 6 months fog) that are just gone and I wish there was a way to get them back.

I strongly encourage those to seek support sooner, so you can mitigate these perinatal mood disorders and their impact early, so they don’t manifest later as ongoing anxiety or PTSD.

If left untreated, PTSD can have severe consequences for the whole family. It can affect a Mom’s ability to bond, enjoy time with her children and remove the joy out of parenting.

Here are some resources for PTSD:

My Prenatal Depression with Twins