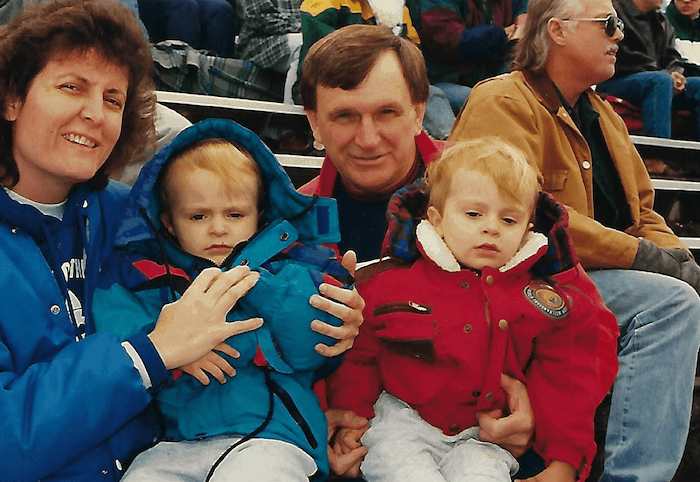 Thanks Mom and Dad for Teaching Me How to Raise Twins

I still remember dad’s reaction as I called from my Dodge Avenger while heading to regroup with Steve for breakfast, after an ultrasound told us baby number two was actually babies number two and three.

I had to convince you I wasn’t joking. Once accomplished, the only other thing I distinctly recall from that conversation was a tone in your voice that can only be described now as, “Oh my God, you’re in for a wild ride and no sleep, ever.”

Thank you, mom and dad, for preparing me – as much as anyone can be prepared – for having twins. 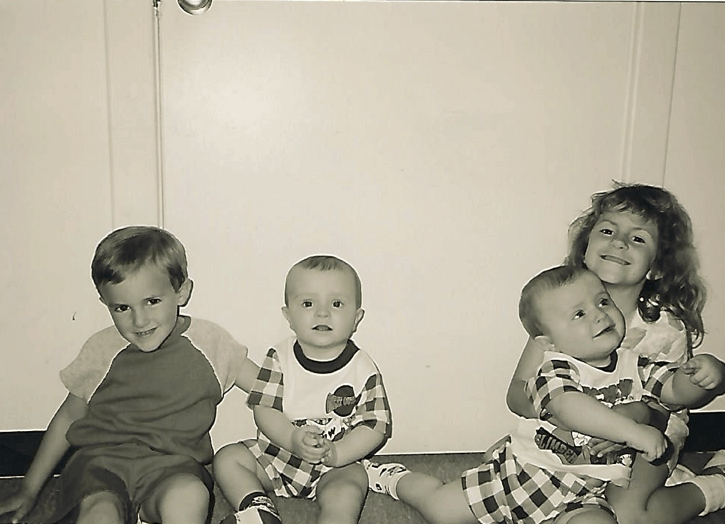 Well, science be damned on this one, mom. I was four and Russell was two when you had identical twins. When I first became a mom, I appreciated you both more than I ever had. When I became a twin mom, I realized you had already prepared me to handle the wild ride.

As a mom of one, I understood your love for me was like my love for my daughter – a love you can only know by experiencing it. As a twin mom and with several littles running around – I am in awe of how you raised a 4-year-old, 2-year-old and newborn twins while both working full time to make ends meet.

When we were young and out in public it felt like you had the same conversation, time after time, with folks who couldn’t but help look at our little group and ask:

“Are the little one’s twins?”

You would answer quickly, casually, and without any annoyance in your tone. Maybe it was the fact mom was a basketball coach and Nike had recently started using “Just Do It” as their slogan, maybe you wanted a quick way to end the ever-repeating conversation, or maybe it was simply that there was no other choice than to raise the young kids God blessed you with the best you could.

Through raising me, Russell, Andy, and Joey, you had already taught me a few strong lessons on how to raise a family with twins. 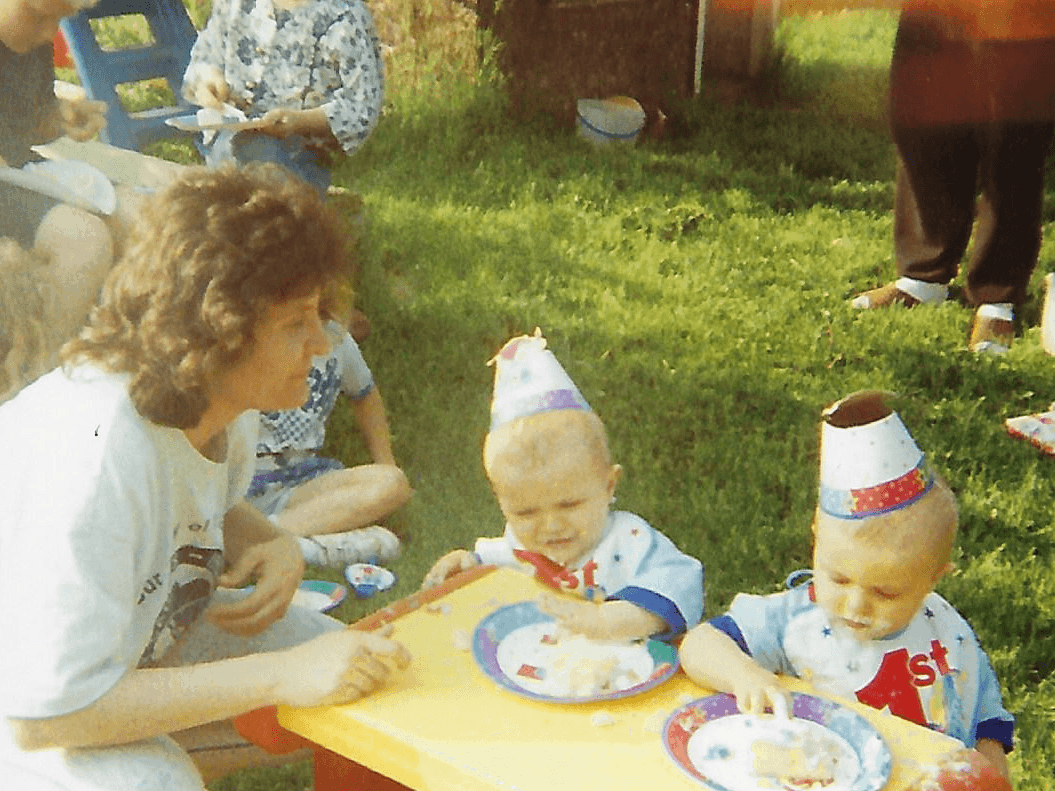 I don’t know how much diapers, wipes, and formula cost back in the early 90s but I assume it was enough to be why dad worked weekends delivering the local paper, among other side jobs you both would pick up.

One of my earliest memories is sitting in the front seat of an old truck, listening to country music, and hopping out to put freshly printed Oakland Press papers into the seemingly never-ending paper boxes of apartment complexes. We all never went without and you made it look easy, fun even, thank you.

“Is that the traveling circus?” is what I imagine people ask themselves when I get all my girls out of the van – likely the same thing they asked 25 years ago when you showed up with four kids under five.  Every day, the process of waking the kids up – often after they rotated who was up all night — changing them (diapers and clothes), feeding them, getting in the car seats, and out of the house feels like a marathon.

I have so much respect for the fact you got four kids out of the house every day for school or daycare. That’s eight shoes, four coats, four lunches, too many diapers and bottles to count, daily. Thank you.

Speaking of trips in the van, I absolutely understand now why during the two-hour trip every weekend to visit Grandma (who was sick with ALS) that we never made stops that required getting out of and then back into the van.  You wanted to get there, not spend an extra half hour in a rest stop parking lot buckling in rowdy kids. You knew that it was important to spend every moment we could with her – for her, you, and us. Thank you. 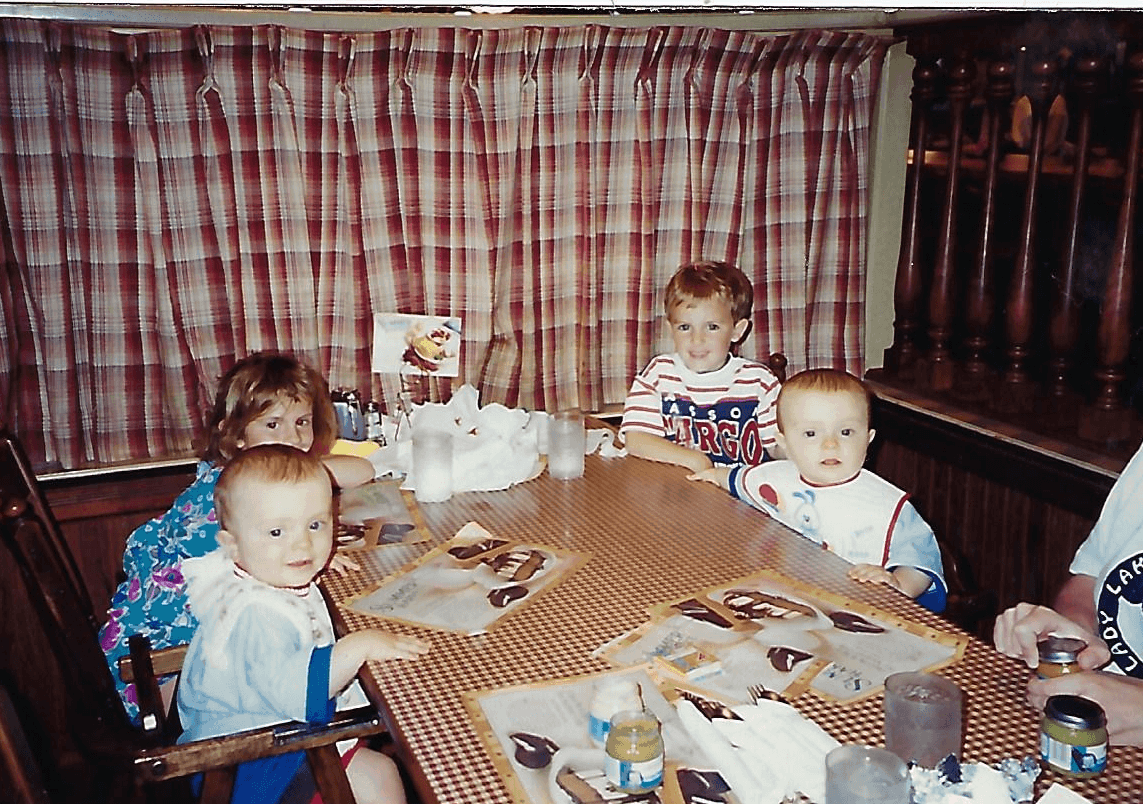 While we didn’t stop on trips to Grandma’s house, you always made sure we experienced everyday life – and that meant trips to local restaurants and sporting events. Sometimes one of the twins would throw a fit, but over time they learned to behave. To which a new conversation would be had with fellow restaurant patrons.

“Wow. Your kids are so well behaved.”

“Thanks, it’s because we take them out.”

It takes a village and it’s okay to accept help

You both worked more than full-time and yet it seemed one of you coached just about every sports team we played on – and there were a lot of them!  You worked hard and spent time with us but also knew that it was okay to accept and ask for help from friends, neighbors, and babysitters.

As a working mom myself, a very important lesson you taught me through your actions was: When you find someone who your kids like and who takes care of them well, take care of that person. It’s worth it in the long run for your kids to be happy and they won’t need a babysitter forever. Thank you. 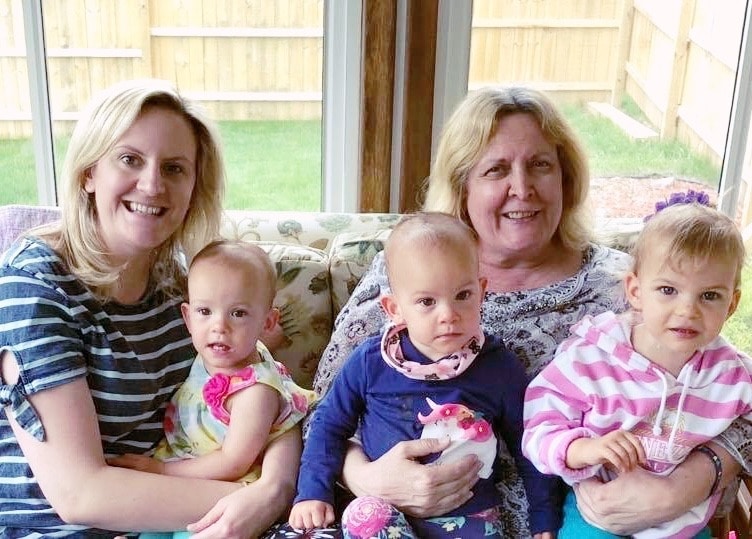 While you did raise us before Facebook and Instagram, you understood that it was good for us kids to just have a day at home from time to time.  Days spent learning to read, count, and play poker on the living room floor were important.

As we got older, I noticed another line in the conversations folks would have with you.  This time was at a grocery store with mom.

“Are the little boys twins?”

“Do you ever wish it was easier?”

“No, I couldn’t imagine my life or the world without either twin. They’re very much their own person and have so much love for each other. It’s well worth it.”

I go back to that particular grocery store response you gave when someone asks if it’s hard or when I think to myself that this is hard. Of course, it’s hard some days, but it’s beautiful to watch twins – these identical twins who started as one egg – become independently fierce with love and loyalty to one another all at the same time.

Thank you, mom and dad, for educating me through your actions how to raise twins. For showing me that every day doesn’t have to be perfect for it to have a positive impact.

With Love From Your Daughter,

Tori Sachs is an advocacy professional, most recently serving as the campaign manager for a U.S. Senate candidate. Tori is a public member on the Michigan Board of Nursing and volunteers on the NICU Parent Council at a large mid-Michigan hospital. Tori resides in Michigan with her husband Steve and three daughters ages 3, 2, and 2.

5 Things My Mother-in-Law Taught Me About Raising Twins 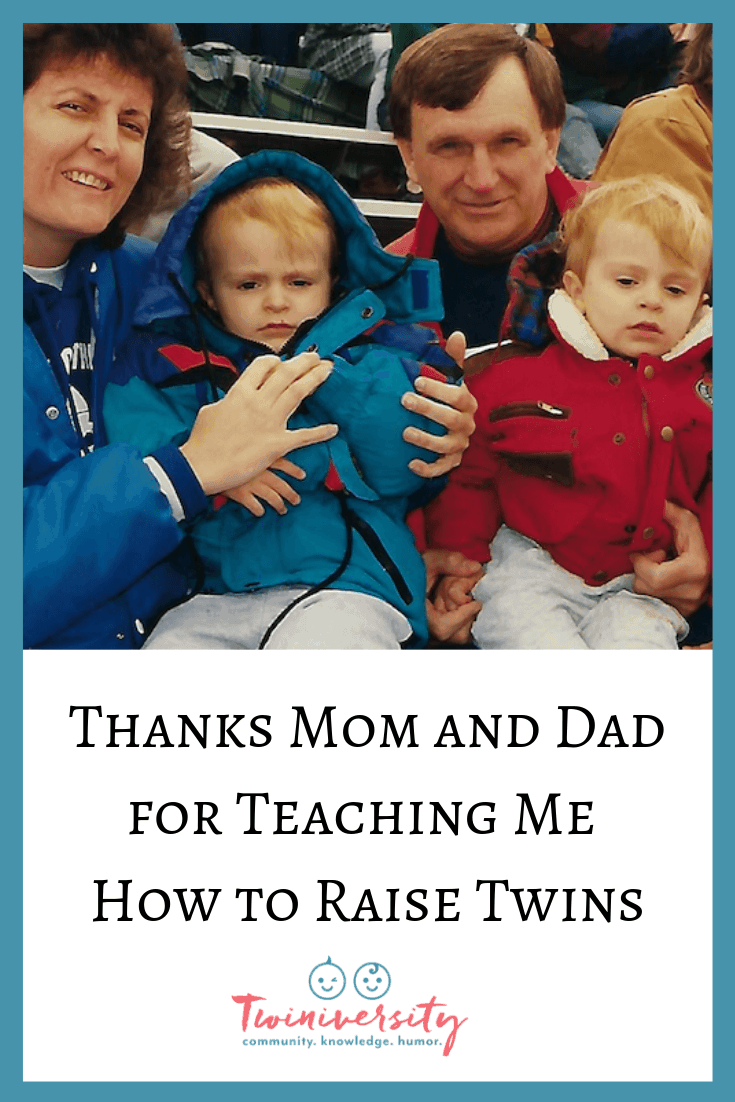