Home » So You’re Having a Second Set of Twins. Now What? 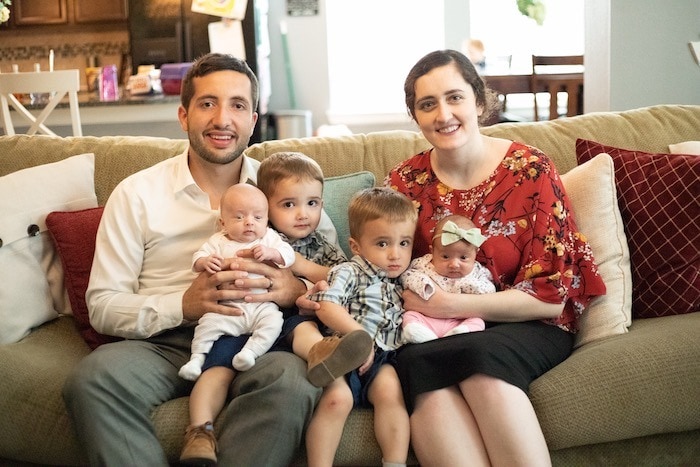 “So what if I told you…there were two?”

Rubbing warm jelly on my already-protruding stomach, and with a sudden flood of disbelief in her voice, my obstetrician seemed to freeze mid-scan. She had wanted to do a simple in-office ultrasound when I reached 10 weeks, you know, just to check.

As I laid still on white, crinkly paper in the office, everything I heard suddenly took on the quality of a garbled, indistinguishable voice—like the adult characters in Charlie Brown. Wa wa, wa wa waaa…

What I did hear, through the shock, was an exclamation—one that would be repeated by a second doctor who conducted a follow-up ultrasound for a “second opinion,” the office receptionists, and anyone who heard the news after:

“I’ve never seen this before!” 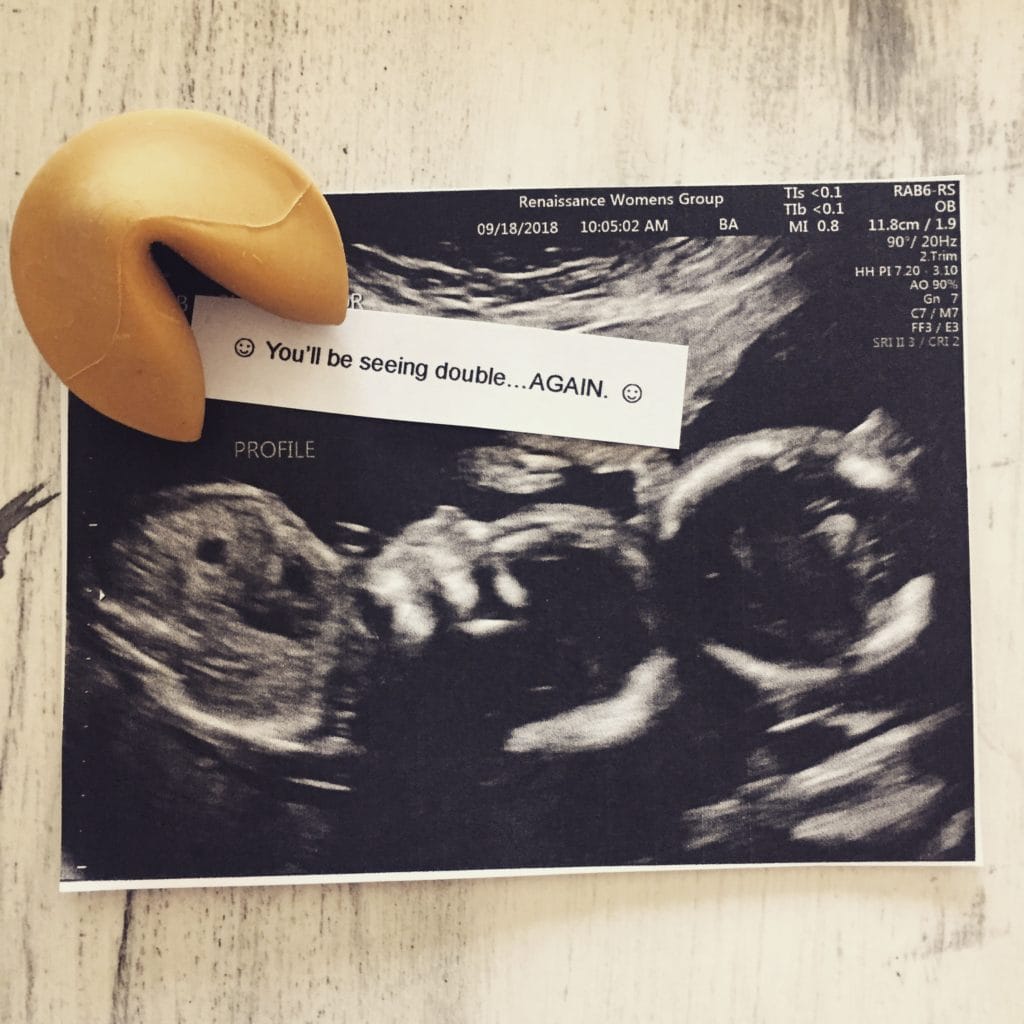 What were the chances? I thought. Even if I did know the statistics, I might not have believed them…if it hadn’t happened before. A year and a half before. To me.

Sure, it was nearly two years before, in a different office, with a different doctor. And yet, there I was, covered in the same goo, experiencing the same shock, hearing the same words: two. TWINS. Again.

“Oh my gosh. There are two!” the ultrasound tech exclaimed that fall day, sending my heart racing and my husband pacing around the room in excited shock. No. Way. Twins?!

At the time, in the fall of 2016, I was 17 weeks pregnant, nearly halfway through a seemingly-normal pregnancy when I found out that I was carrying two babies. Suddenly, the thought of raising two newborns in our 300 square foot apartment on a nearly-newlywed budget shocked me into action: immediately, I started desperately scouring Facebook second-hand baby groups for gear and clothes and shopping for discounts on diapers. 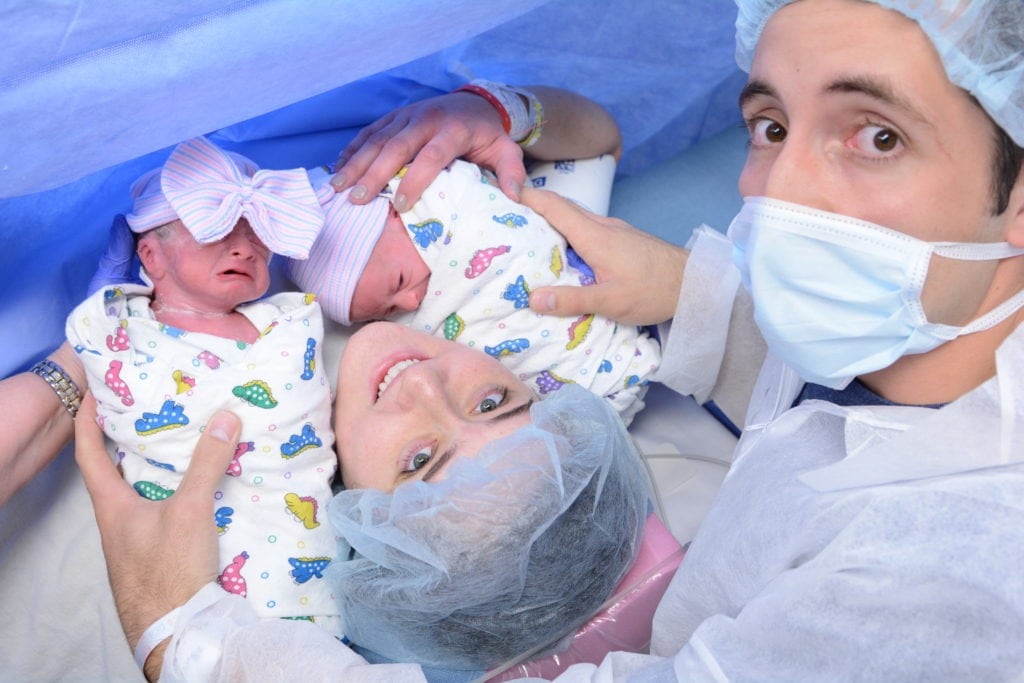 After a traumatic c-section at 34 weeks, a five-week NICU residence, managing sleep shifts, and washing bottles by hand between my husband’s classes and finals, we began raising two amazing, exhausting, wonderful twin boys. We embraced our new (crazy) normal.

Just as I had nearly two years before, I left the office that day, in August 2018, starry-eyed, death-gripping my long sheet of grainy black-and-white photos. My first set of twins, two boys, were just 18 months old. How were we going to do this—twins—again?

Celebrating the news at dinner that night, with our twins throwing mac and cheese on the restaurant floor, my husband and I calibrated, minds racing. Images of diaper mountains, the logistics of fitting four car seats into our compact car, assembly-line diaper changes and feedings, and simultaneously managing potty training and sleep-training danced in our heads. Here we go again.

And here we are. Now, with four little ones instead of two, our hands (more than) full, we embrace the life of multiple multiples.

So whether you, too are having your own second set of twins, or are simply riding the wave of a new twin normal, I say: Congratulations!

From one multiples parent to another, here’s what a double twin mom thinks you should know about having a second set of twins: 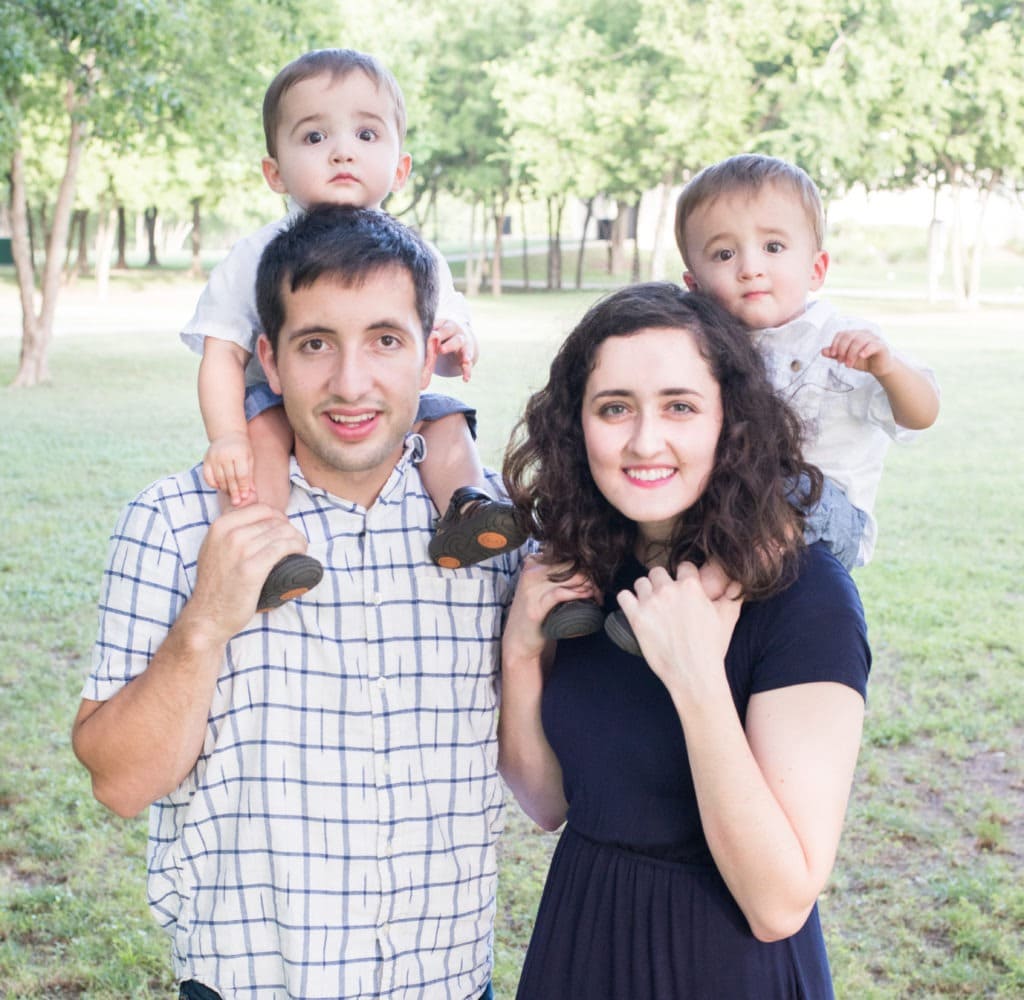 Know that some things will be the same. And some will be different.

My first twin pregnancy was wrought with complications that included weekly non-stress tests, two rounds of steroid shots, and nearly-constant monitoring. I expected my second pregnancy to be the same—and in some ways it was. I was a regular at my doctor’s office, I had frequent ultrasounds and a short cervix, battled insomnia, and I was measuring full term at close to 30 weeks.

But in many other ways, it was a 180-flip from the first time around. Morning sickness tapered off after only 8 weeks, my blood pressure stayed regular, and I made it successfully to 36 and half weeks before my twins were born during a scheduled c-section.

Don’t expect your second twin pregnancy to be a mirror image of the first; just like each child, every pregnancy is different. If there’s anything a (first) twin pregnancy has taught me, it’s that you just have to go with the flow and evolve to each situation.

Know that you will need (even more) help.

We know that twin parents are basically superhuman. That’s obvious. But with two sets of multiples, you’ve really got to ditch the act of trying to have it all together. The jig is up on that.

Since becoming a double-twin mom, I’ve had to slowly (okay, more like crash-and-burn) transition out of my deeply-rooted Type A personality habits and learn to surrender a level of control on…well, controlling everything.

Sometimes, the reality is, you’ll be in a worn set of joggers and a ratty t-shirt…for days on end. And forget showering. Some days, it’s just not going to happen (oh, is that just me?) Your clothes will nurse mysterious stains, you’ll sometimes have to claim leftovers donuts as “lunch,” and your kids might not have gourmet dinners every night. Or any night.

That being said, you cannot do it alone. Learn to say “yes” more often to help, and “no” to those schedule-filling activities that create added stress in your life.

It’s a good idea to start planning which family members and friends will help after babies are born, and setting aside specific ways they can be helpful (Twiniversity has a handy chart!) Time to let go a little and let your SOS messages be answered. 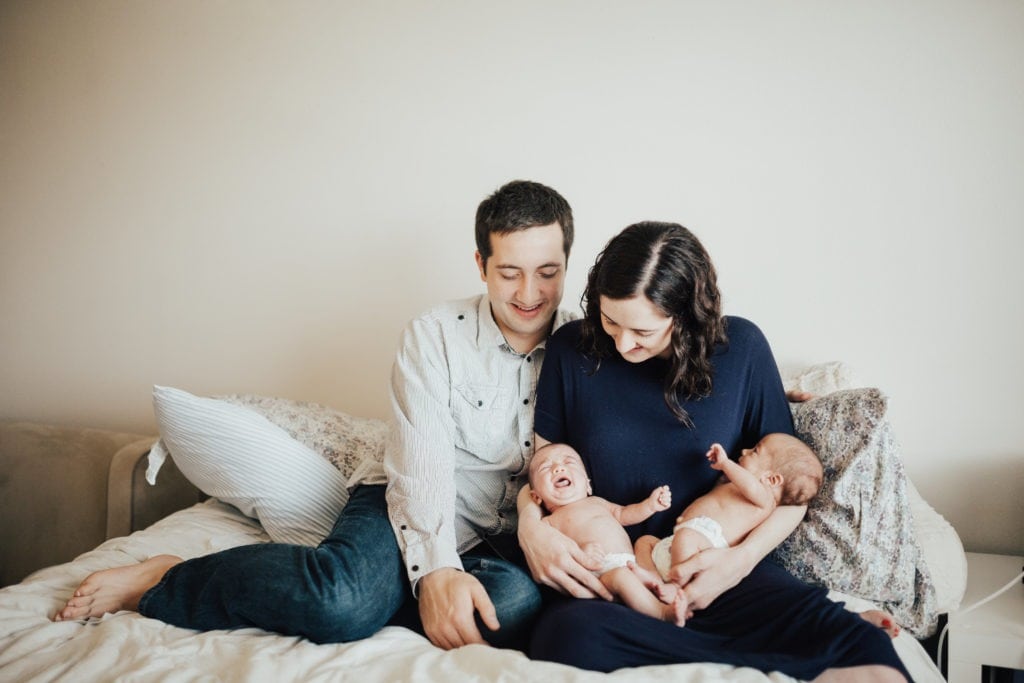 Embrace your opportunity for a “do-over.”

With my second set of twins, I was able to seek out education I didn’t have beforehand (like that in the insanely helpful Twiniversity class on breastfeeding twins), find essential know-how on the best baby gear, and better manage the anxiety of a high-risk pregnancy.

Have confidence in yourself.

I know, it’s not easy to project those “I’ve got this!” vibes when you’re battling older-twin tantrums at Target, sporting a 20-weeks-but-looks-30-weeks twin tummy, or warding off the barrage of “You have your hands full!” comments you get a hundred times a day. But the truth of the matter is, you can do this.

When I announced a second twin pregnancy, after the shock and disbelief from others wore off, they’d often try to offer encouragement by saying things like, “You already have twins, so you’ve got things figured out!” to which (my own) nervous laughter ensued. Right. Not even close, I thought.

But I came to realize, even if my second twin experience is different—even vastly—than my first, there’s one thing I could be sure of: I would get through it. Even with a few bumps and bruises (literal and figurative), I figured it out the first time, and I could again.

With your first set of twins, you’ve developed an amazing ability to adapt and be flexible (and likely a great party trick of being able to load bags, a double stroller, and two cars seats into your car in record time.) So trust in that.

And do the best you can to ignore the misguided or ill-intentioned comments of others; you are the twin parent, not them. You’re the perfect parent for your twins. And you’ve got this! 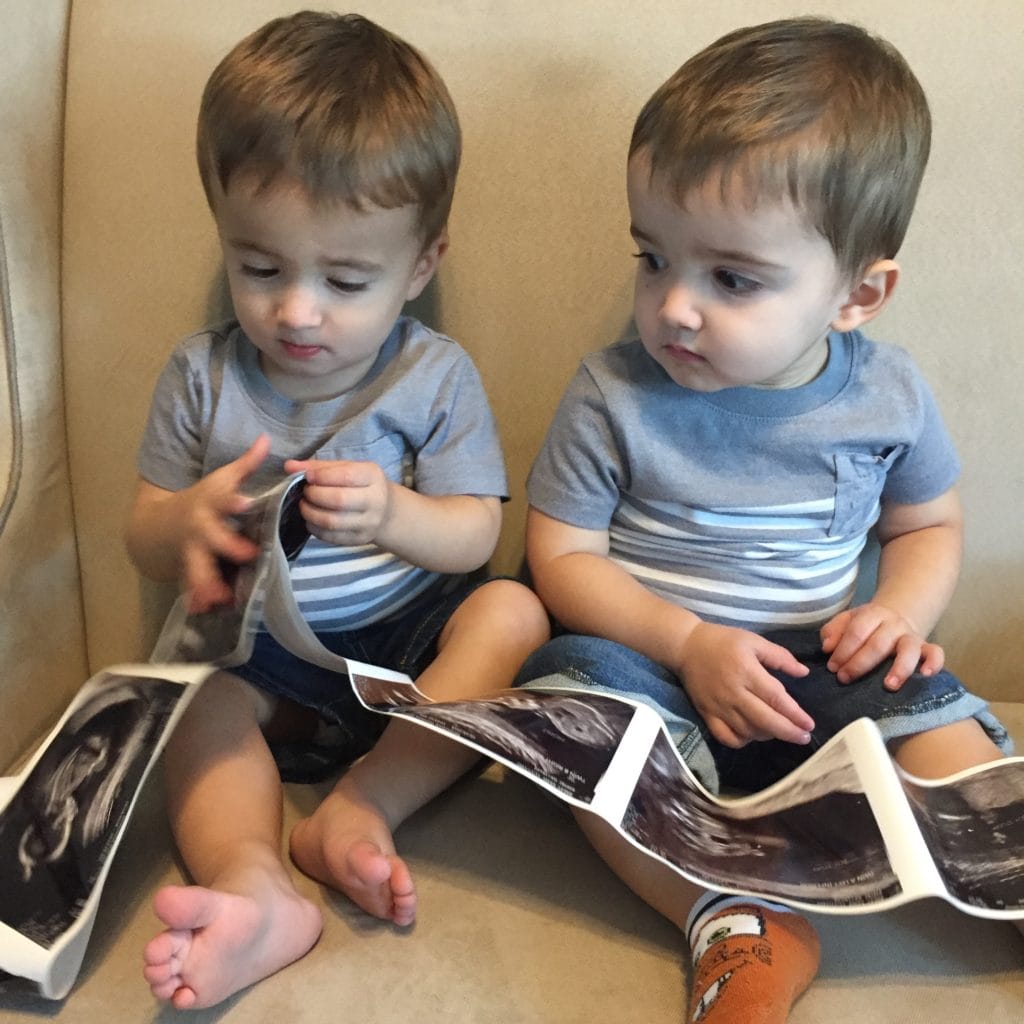 Your life isn’t going to look like everyone else’s — and that’s okay.

It’s a hard reality to accept, but here it is: you can’t control everything, especially when dealing with two (or four). Get used to your new normal. Your family life isn’t going to look like others’. And that’s okay.

Maybe with extra bottoms to diaper, you can’t afford the fancy new whatchamacallit, the latest and greatest must-have baby product, or go out with all the kids to eat or on a grocery run—at least, without losing your mind. But you do have other milestones and moments that others don’t.

You get to see a unique kind of bonding between your children. You get to have more efficient pregnancies (that was a big bonus for me). And, hey, my kids could make up a good portion of a sports team at their high school together. How many people can say that?

Don’t compare your pregnancy, birth experience, or family life to your friends or those you follow on Instagram. This is your unique journey.

As I face the realities of being a twin parent, I often feel fear of the unknown and my ability to be a good parent to my twins. But in contrast to the fear, I also feel incredible joy at the amazing, abundant journey my childbearing experience has become.

The world of twins is incredible. I am better for being a twin mom. Plus, between the one-of-a-kind bond, the twin-speak, and the double trouble, I get to experience the wonder that comes with the unique family dynamic twins create.

The shock of multiples will wear off as you adjust to your new normal, but don’t forget to marvel at the beauty of your unique experience—and record the memories. 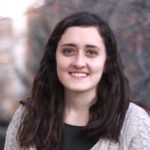 Kasee Bailey is a double twin mom and freelance writer from Austin, Texas. When she’s not wrangling her two-year-old boys or rocking her newborn boy/girl twins, she’s catching up on her to-be-read list, squeezing in a nap (ha!), or scouring the aisles of Target. Besides her children, surviving two separate NICU stays and perfecting her chocolate chip cookie recipe are her proudest achievements.

Related Articles – So You’re Having a Second Set of Twins. Now What?

Will I Have A Second Set of Twins?

Identical Twin Sisters Have 2 Sets of Twins Each!

Mistakes I’ve Made As a Parent of Twins

Favorite Moments As a Parent of Twins 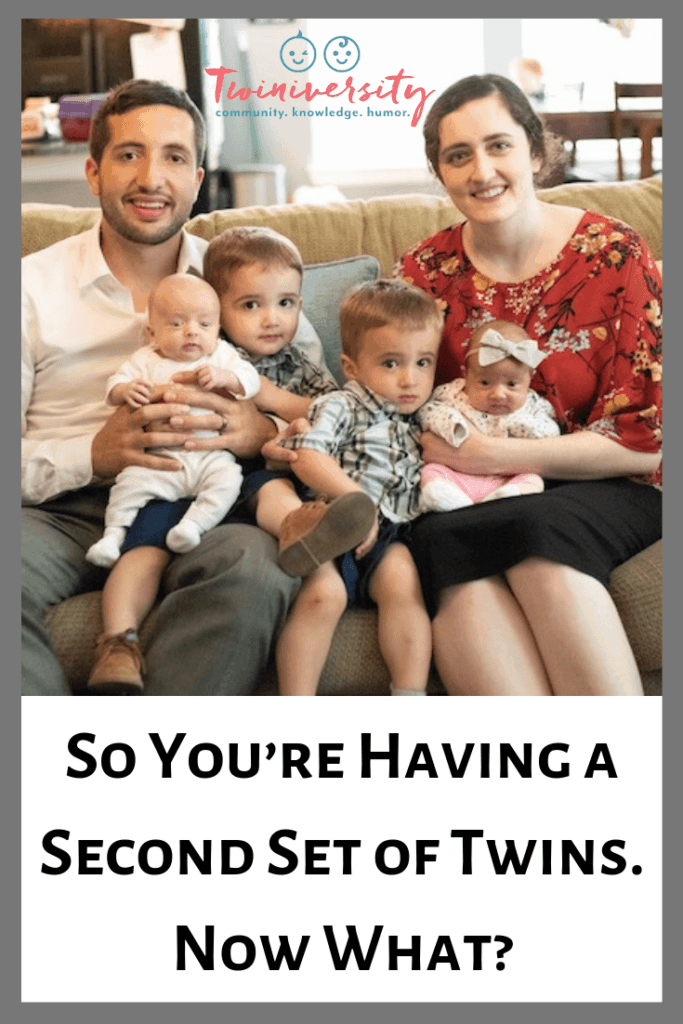