Home » Feeling Lucky: Looking Back on the Struggle of Newborn Twins 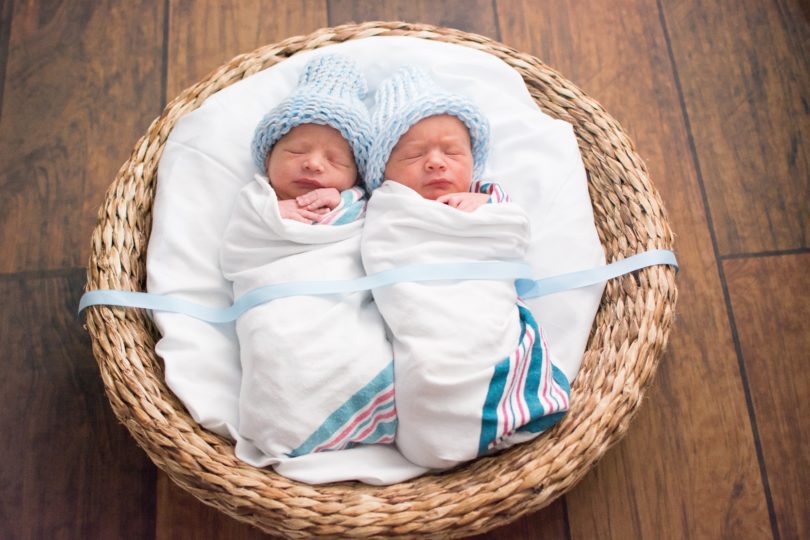 Read about a mom’s reflections on her struggle with raising newborn twins and how she feels everything got better as they got older.

“You hit the baby jackpot!”

The congratulatory remarks were profuse anytime we were out and about with our newborn twins. Going about your day to day life with twins in tow can make a first-time, newbie mom feel like quite the spectacle.

I quickly realized that many people are enamored with twins (and even more so with higher-order multiples), and often lose all sense of decorum in their presence. Fellow shoppers (strangers) at the grocery store wanted to know if my newborn twins were “natural.” Neighbors couldn’t let the stroller go by without a coo and a “better you than me” proclamation. Seemingly everyone asked if my pink and blue-clad boy/girl twins were identical.

I, on the other hand, could only think – “how do people do this?” I read all of the books I could find on caring for newborn twins, I scoured forums and message boards for tips and tricks, and I talked to fellow moms and MoMs (Mothers of Multiples) to try to learn the secrets that I was sure everyone knew but me.

I was certain that my two were the only ones who never slept, cried for hours continuously, and couldn’t seem to “get” breastfeeding. I was even more confident that I was the only mother of multiples who yearned for those idyllic moments with a baby that are less frequent with two babies. I sometimes resented the complexity of newborn twins: the struggle of getting out of the house, the assembly line-like feedings, and the strict adherence to a schedule and routine.

When the twins were almost three months old I decided to take them for their first-ever visit with “Santa.” I fed them, dressed them in their festive and oh so cute outfits, and loaded everybody and everything into the car in time to be one of the first in line. When we arrived at the shopping mall I unloaded the double stroller, got each baby snapped in, and then… got a whiff of a diaper in need of changing. I opted to change it in the first public restroom we came to and headed inside.

Once there, after numerous attempts to open the door to the store and maneuver the stroller in before it shut on the kids (I eventually learned to go in backward – duh), we made our way into the restroom only to find that the changing table was broken. The next one we came to had an operational changing table, but using it and parking the stroller meant we blocked every stall. Luckily, I was a pretty speedy diaper changer at that point and we were in and out before causing too much of an inconvenience.

We finally arrived at the Santa picture area and I was surprised that the line wasn’t too long. Once in line, though, I realized that Santa was nowhere around. I thought it would be a short delay and decided to stay in line. Eventually, an “elf” came to tell us that the schedule would be changed that day and the “Big Man” would not be making an appearance until an hour later.

I was determined to get those pictures, but it was soon going to be time for the kids to eat again. So, I took them back out to the car planning to give them each a bottle while in their car seats, and then go back in to get in line just before his new arrival time. My daughter proceeded to spit up all over her white outfit, my son began to wail furiously as I was attending to his sister. The nap time we had not strayed from in months had come and gone, and I admitted defeat.

I pulled into my driveway with two sleeping babies and just sat in the car. My husband arrived home a short while later and I was still sitting there (I wasn’t going to risk waking them and getting them even more off schedule). He cautiously approached the car and worriedly asked if everything was okay. I incoherently began to tell him about our crazy day, before I ended with the statement that seemed to be on repeat in my mind…

Sure, there were also times that took my breath away… incredibly sweet, poignant moments that are unique to twins. My tightly swaddled, immobile little ones would somehow find a way to get their feet touching before falling asleep each night. They would hold hands when sitting in their side-by-side bouncers, and their biggest first smiles and laughs were reserved for each other.

Nevertheless, the sheer amount of work and caretaking it requires to manage infant children, with colic, while both parents work full-time jobs, is not easy. I am ashamed to admit that I inwardly cringed when someone talked about our good fortune to have two babies. Not because I doubted that we were enormously blessed, but because I worried that they could tell that I didn’t necessarily feel lucky at the time.

Everything got a lot better as they got older. At their first swim lessons my son spontaneously gave my daughter a hug and told her, “You can do it,” when they were asked to jump in the water. When my son played in his first soccer game my daughter could be heard cheering the loudest and proudest on the sidelines. They instinctively know when the other needs comfort, encouragement, or a good laugh.

One such day was the second week of Kindergarten when teachers encouraged us parents to allow children to walk into school and to their classrooms on their own. I was weepy as I stood on the sidewalk in front of the school. My daughter looked equal parts nervous and excited and my son was pure confidence, ready to take on the latest challenge. He looked at me and said, “We’re good mom,” and grabbed his sister’s hand to help her be strong and brave. They walked away and then both turned back and yelled, “LOVE YOU!”

As I stood there watching my “babies” embrace being “big kids,” I thought “Ah-ha!” This is what it’s all about. I have two amazing little people to love, who love me back. They have each other; such a special relationship that is theirs because they are twins. I realized that my twins are so fun and so precious, and just so plain awesome that I barely even remember the first few months.

And in that moment I finally thought, “I am so lucky.”

Shellie Fossick is “mom” to 9 year old boy/girl twins.  She is also the Development Director for a non-profit organization that provides high-quality early care and education for more than 400 low-income children in Middle Tennessee.  She lives in Nashville, TN with her husband and two children.

Related Articles – Looking Back on the Struggle of Newborn Twins

5 Tips to Survive the Newborn Stage with Twins

I Worried About Bonding with my Newborn Twins