Home » Are You Crazy? Having a Third Baby After Twins 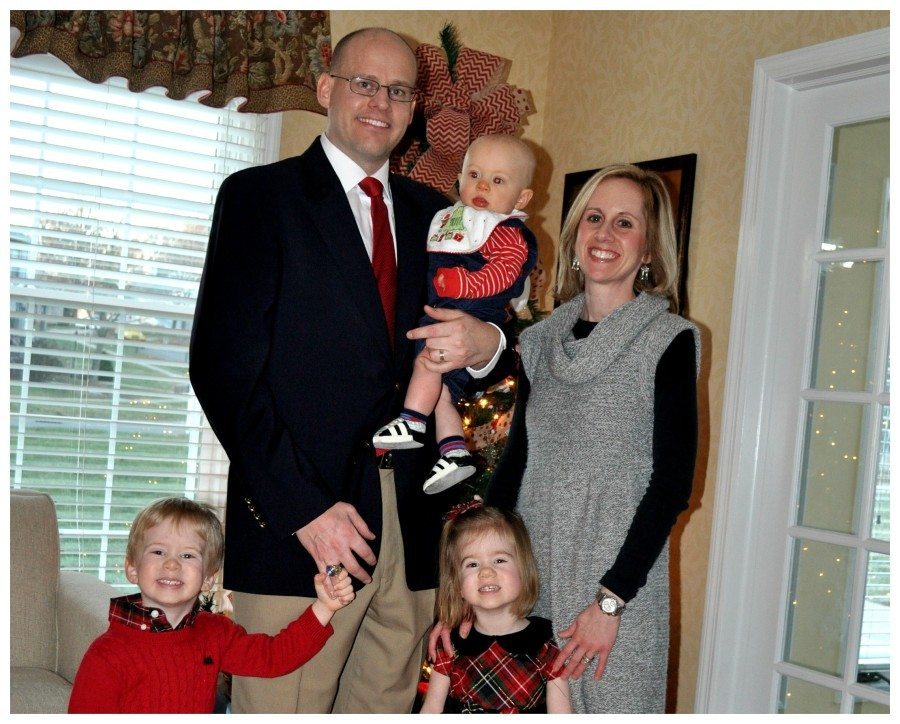 Read about a mom's struggle to balance it all when a surprise third baby comes into her life after twins. Learn how she manages with 3 children under 3.

My husband and I ventured out to Target the day after Thanksgiving with our boy/girl twins, almost 3 years old, in the back of a cart and our little guy, 8 months old, strapped to the front of my husband, all in tow.

We got a lot of strange looks that day and a lot of “are you crazy?” stares.  We are used to it at this point.  I mean, according to most people, we should have been done having kids after the twins — we did, after all, have a boy and a girl. We had plenty of weird looks when we just had twins, let alone adding another baby to the mix.

Getting pregnant did not come easy to us.  It took us roughly 3 years to get pregnant with our twins and that was after 3 IUI cycles, a miscarriage, and 1 IVF cycle that produced only 2 viable embryos. So, you can imagine our surprise when we learned we were pregnant with baby #3 and our twins were only a year and a half old!

He was not a planned baby by any means, but what a sweet little addition he has been. He was born in the spring when the twins were almost 2 ½ years old and I was so sure they would just be in love at first sight with him like I was.

I won’t sugar coat this and say that things have been easy.  It’s been far from easy.  The twins have cried. I have cried. There have been days I wanted to get in my car during nap time and just leave them all in their beds and drive away.

I have never wished time away until the first summer we were a family of 5.  I wanted nothing more than for it to be fall.  Fall meant I could drop the twins off 2 days a week at preschool and the baby would be 6 months old and he would be able to sit up and things would just be better for all of us.  The twins would see that the baby wasn’t leaving and would accept him and start to really love him and want to play with him.  The baby would stop spitting up so much and start sleeping through the night.  Everything would magically just get better. Right? Well, sort of.

The twins did start school and I had 2 mornings a week with just one child and that just felt weird. One child was kind of a joke after having infant twins.  I understand that may sound awful to those who have one child at a time, but for us multiple moms, one baby is actually easy.  At least that baby is easy when the other kids are not around.

We were right in the middle of the terrible twos when the baby was born.  RIGHT in the middle.  I always thought I had these angel children, and for the most part, I do.  I was not totally prepared for what it would be like to bring a baby home and introduce him to a 2-year-old.

I assumed that because I had 2 kids at the same time and neither had ever been the only child that they would accept the baby and transition without a hitch.  That would have been great; however, the twins were not having any of that. I thought I had prepared them for the baby and what that meant.  I was in for a very rude awakening.

The first few weeks were a little deceiving.  The baby was new, grandparents were here all the time to help, meals were delivered to us, everyone was getting spoiled.  The twins seemed happy and I was thrilled that they had excepted their new brother.  I should have known better — I should have known it was too good to be true.

After a few weeks, things got interesting.  My sweet little 2-year-old boy picked up a glass vase and tossed it; my little 2-year-old girl started chewing her hair. Both twins stopped eating normally and my once good sleepers barely napped and were up all hours talking and trying to escape their cribs. Did I mention potty training was disastrous (and still is)?  What had we done?!

I had an overwhelming sense of guilt about having a third baby.  Before he was born we had a routine and I had enough hands to leave the house with the kids by myself.  Before the baby came the twins were happy and normal, well-adjusted toddlers.  My husband and I had free time in the mornings and in the evenings to work out, read books, and enjoy a beer together.

The guilt was almost too much to handle. On top of the guilt I felt for what I had done to the twins, I felt guilty that I was not connecting with this sweet little baby.  I worried that I wouldn’t be able to handle all 3 kids, physically and emotionally.

But here I am, 9 months later, and we have all survived. I may have a few new gray hairs and I may look a little bit more worn than usual, but we are surviving.  I wish there was a book or a list of rules on how to be a mom of 3 under 3, but there isn't. Each day is about surviving and doing what works best for your family and not letting yourself feel guilty about it — a lesson I have tried to learn over and over again.

I had a lot of expectations and ideas of what life would be like after the baby was born and it has been far from what I expected.  Some days are good, others are bad, but all of them are filled with love and gratitude that I get to be a mom at all.  After all, it was not an easy road to get here.

Although life is harder now, running errands is an all-day ordeal and keeping my house clean is a joke, I wouldn't trade what we have gained for anything in the world. Tantrums, dirty diapers, toddlers who won't potty train, and having a third baby after twins has worked for our family. We are just crazy enough to make it look normal.

Meredith Echols is a mom to 3-year-old boy/girl twins and a 9-month-old baby boy.  She has been married for over 9 years to her best friend and lives in Indiana. Meredith was an interior designer for 10 years before starting her own floral design business, A Fresh Flower.  When Meredith isn't chasing her 3 kids all over town, she can be found cleaning, doing laundry or cooking something.  If she finds some free time, she enjoys reading books, blogs, shopping and enjoying a beer or glass of wine with her husband.

Related Articles – Are You Crazy? Having a Third Baby After Twins

Actually I'm Not Done: Having a Baby After Twins

The Second Time Around: Trying For Another Baby After Twins