Home » The Pros and Cons of Twins 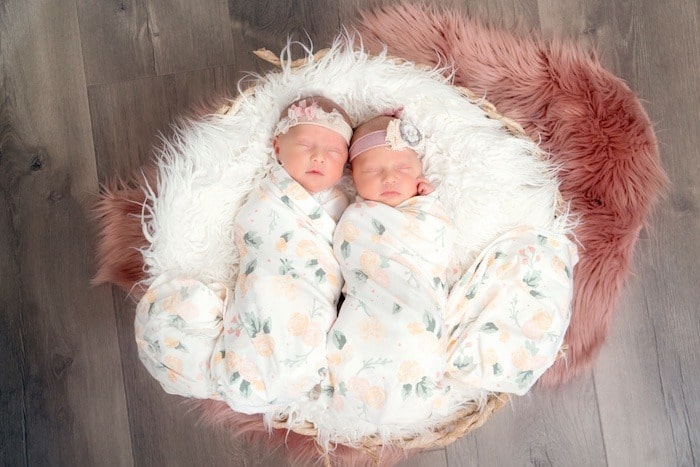 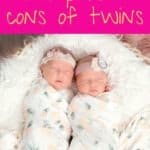 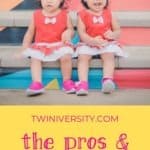 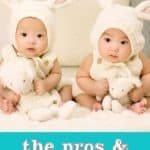 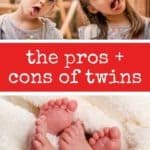 This humorous look at the pros and cons of twins proves that there’s nothing quite like being a parent of twins.

Having twins is unlike any other experience in one’s life. I must say the word “twins” at least 10 times a day. My whole mindset changed and my approach to all of my everyday tasks had to adjust.

I have always been a Type A planner, but now I even have to plan out a trip from the living room to the car, which goes like this: first, pack the diaper bag, then their food bag. Put bags, keys, and coats by the door. Change babies. Open car doors and prop open front door. Load bags in car in under 10 seconds, being careful not to distract babies playing happily in their playpen. Carry 42 lbs of babies in both arms, grab coats, lock door. Put one baby in car seat while holding the other. Load in second baby. Get in car. Turn on heavy metal radio station. Go.

If it sounds exhausting, it is! When people say, “I’ve always wanted twins!” I’d like to run this little scenario by them to watch their eyes glaze over and point out to them that this is only 15 minutes of my day.

But, what is it really like overall to have twins? People ask me this all the time. So even though I truly believe there aren’t any cons to having twins (besides my consistently empty wallet — organic milk is expensive!) here’s my take on the pros and cons of life with my daunting duo.

Everyone Talks to You

I’m a very social person so I generally do well with being a traveling sideshow. Wherever I go with the twins, whether to the store, playground or to the same place over and over (i.e. visiting my grandmother in her rehab facility) I am inundated with the same questions.

I can see now what celebrities feel like towards the paparazzi, except without the riches or dates with Johnny Depp. No wonder they sometimes are so saucy. It can be trying at times and I don’t always feel like talking. Sometimes I have to get them where we need to go before they have a meltdown.

It’s like always being with the Riddler! No, they are not identical. Yes, I’m sure. Yes, they are twins even though they are a boy and girl. No, they don’t have magical powers. Yes, they have the same birthday. No, I didn’t use fertility drugs. Yes, twins run in my family.

On the bright side, people are mostly just genuinely curious and it’s nice to strike up a conversation with other adults. Sometimes, for stay at home moms, fitting in that adult conversation time is tricky. I’m a work from home mom, so almost all of my adult conversations are work-related, which is far from stimulating.

During this last rough winter, I had days upon days when my most in-depth conversations were with my six year old. Not that he didn’t have some insightful comments about Dancing with the Stars and how it IS a good idea to eat meatballs three nights in a row, but just the same, he’s not a grown-up.

You will feel the highest highs and the lowest lows

Yes, they are cruising, clapping hands and touching their bellies! Imitating words, even! It’s so exciting! Wait, one has pink eye? Uh-oh, now the other has pink eye? Yikes!!!

For every euphoric moment of twins holding hands and giggling, there are twice as many screaming, poop-filled diapers and fits of inexplicable beastliness. Look, they like the song I am singing to them! Hey, you both can’t throw Cheerios in my face! It’s a daily roller coaster of emotions and even though it can seem that every day feels the same, it never really is.

I also find myself always trying to celebrate one’s accomplishments without disparaging the other, which makes me sometimes over-applaud mostly useless actions. Yes, my son just blew me a kiss! Yes, my daughter did not rub yogurt through her hair! See? Equality is a tough balance. Having two sick twins is a nightmare. Having two tap-dancing twins is a joy!

You have two of everything

There are two cribs, two high chairs, two exersaucers. Two hearts to love you, two beings to guide, two babies to raise to be responsible self-sufficient adults. Your job is twice as hard, and never a one-way approach.

I am always thinking of what will suit each person best. I’m so careful not to lump them together and assume that if one likes something so should the other.

Or vice versa, if one balks at lima beans that the other will automatically do the same. It’s twice as much worry, but twice as much delight. And, even though I am quite the budgeter, almost everything is twice the price! When people say, “Oh, you have the ‘two for one’ special!” I respond, “Nope, they are two for two! Check my bank account!”

If one is talking and the other is not yet, nothing is wrong. I am sometimes suspect if one twin starts doing something, panicking about when the other will catch up. Then three days later, they both do it and I feel like a fool over and over again.

No one’s life should be a game of catch up. I have to remind myself that they are individuals who will do things in their own time and to stop comparing them. I think how I would feel if everything I did — eat breakfast, have an interest in something new, or laugh at a joke — was compared to another person’s reaction to the same. That would drive me nuts!!

Being a parent to twins is something that is so difficult to explain, and sometimes on rough days, I notice a person with one baby and opine about how easy they must have it. One baby? Piece of cake! I could take care of one baby with my eyes closed!! But you never know someone else’s troubles and that one baby could be a tiny monster.

I have two healthy babies who are good eaters that sleep through the night. I have it really good. In the depths of the most trying times, I realize that I am strong. My twins were meant to be and meant to belong to me because I do my very best to love them and care for them. That is the best pro of all.

Daniele Parris is a work-from-home mom to an upbeat six-year-old boy and almost one-year-old boy-girl twins.  She lives in the suburbs of New York City and has degrees in Fine Arts and Philosophy from New York University.  She makes her living in the Healthcare industry and spends most of her time with her boisterous Italian family, trying to get a word in edgewise.  Her hobbies include cooking and baking, an unholy knowledge of 80’s hair-metal bands and trying, albeit almost always in vain, to guess the monetary value of the items on Antiques Roadshow.

Related Articles – The Pros and Cons of Twins

What You DON’T Need When You’re Having Twins