Home » Potty Training Twins When Only One Child is Interested 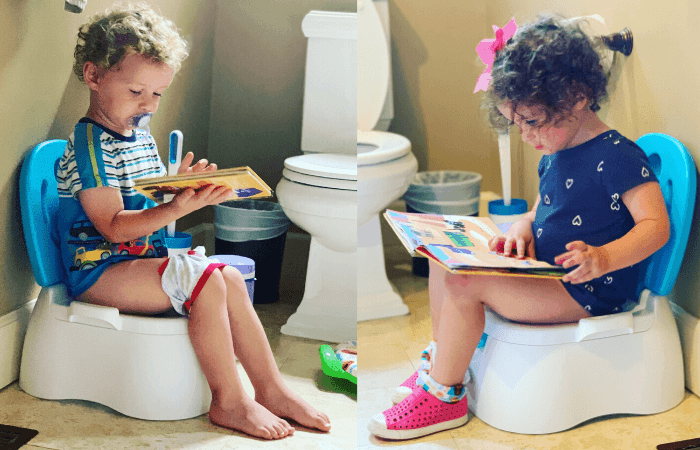 Read about a mom’s experience potty training twins when only one child was interested and the other was happy to sit back and wait.

My twins arrived at almost 38 weeks gestation, delivered via c-section after I went into labor four days before it was scheduled. We were fortunate both babies were over six pounds apiece, my girl being born first and my boy second and one ounce larger.

For the first year, my daughter was the one who did everything first. She was larger, ate more, and gained weight more quickly, slept less and needed to be held more. My boy was calm, sweet, and rarely fussed. My girl was the engine that drove most of our schedule.

As they became more active, she would be the one trying the next stage before my boy had finished the one before. Yet, he always caught up quickly. While she would spend three months “swimming” on her stomach before learning to crawl, after watching her for a few days, he would skip the “swimming part” and go straight to crawling.

It was the same thing with creeping and walking – she would spend weeks practicing before finally accomplishing it, and he would watch her for a few days after she’d gotten it, and just get straight to it.

My daughter, the youngest in her class with a summer birthday, is a cheerful little girl with a busy personality. Very quickly after entering the toddler class we switched to pull-ups and she quickly was able to tell us when she was wet. She went from there to running to the potty to go, and now spends the day in underwear at preschool.

At home, we make it easy for her by having a step stool by the sink and the toilet. The small Elmo ring is always on the toilet downstairs and upstairs in the bathroom the twins use. Every time she goes we give her a Skittle, applaud loudly and make a big deal out of it.

With both of my older children, we had to go cold turkey on the pull-ups; they were just using them like diapers, so I know that is soon in the cards for her as well. I know consistency is the key for potty training, and some bribery if necessary. It’s hard with two older children to be home enough on the weekends to commit to taking away pull-ups.

Surprisingly, my son remains uninterested. While I always ask him if he needs to go potty (and he’ll even toddle into the bathroom, following his sister as she shrieks she needs to go) he hasn’t expressed more of an interest.

For a while, he wanted a treat when we gave her one, and wanted to sit on the potty, but when I explained to him just sitting wasn’t going to get the treat, he stopped even bothering to sit. Since he couldn’t even tell us if he was wet and always blamed his dirty diapers on his sister when we asked if he needed to be changed, I don’t think he has been making much of a connection yet between what’s in his diaper and going on the potty.

But we try to include him in the process without forcing him to participate. We read them the same potty books, have them both try to go before the bath when they already are pant-less, ask them at the same time if they need new pull-ups, and encourage them both at the same time while not forcing either of them to sit on the potty longer than they want to.

I hope that just by being comfortable with the process, by the time my son is ready, it will be an easier transition, since he knows what his sister does and what positive reinforcement she gets. I also sit him down to pee, just as I do her, because I think that will be easier for him as opposed to learning standing up. They do the same thing at preschool.

With two older kids and a full-time job, I’m not as pushing potty training as I might be if I stayed home, because we are rarely at home for them to run to the bathroom (mostly they are riding around in the car picking up their older siblings!).

At preschool, they follow the preschool potty times, which we try to copy at home, but since I still have a few months until they are required to be potty trained, I am still willing to be a little more lax about it in the hopes that they will pick it up on their own.

While I’d love for both of them to be potty trained and out of diapers, right now I’m just thrilled we have one less child to buy as many pull-ups for.  Not having them potty training at the same time has not been an issue as it sometimes can be with twins. While my son hasn’t caught on yet, just recently for the first time told me he was wet and needed a new pull-up. And my hope is he’ll pick this up as quickly as he did crawling and walking. I hope! 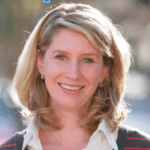 Meg Sacks is the mother of four – including boy-girl twins. She is an office mama with 18 years of corporate communications experience and is also a contributor to Jacksonville Moms Blog and the MOPs International blog. She loves writing about her kids and learning over and over again how to be a mom – especially to twins!