Home » 7 Moments to Look Forward To With Twins 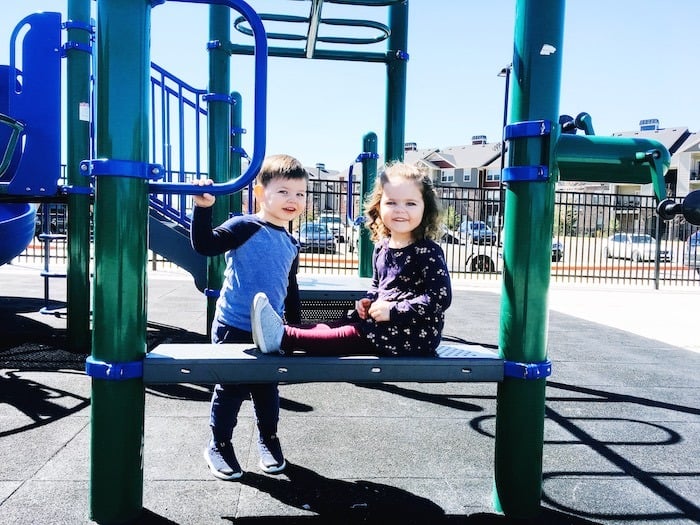 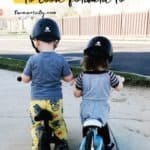 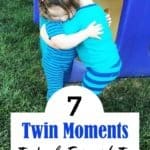 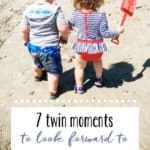 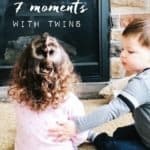 Read about seven moments to look forward to when you have twins from a mom who has made it through the first two years with her twinnies.

Those first few months with twins are no joke! You have the feeding schedules, sleeping schedules, and crying. Plus you have two newborns to take care of! I remember feeling like I was drowning in my own life. The best phrase to sum up my first 12 months with twins is, “This too shall pass. It may pass like a kidney stone, but it will pass.” LOL!

If only I knew then what I know now, maybe I could have enjoyed it a little more. But I’m here with hope: I have witnessed some moments with my twins recently that will give every new parent of twins something to look forward to and help them get through the hard times of that first year.

1. The first time they comfort each other.

It didn’t happen until my twins were two-years-old, but I will remember this moment for the rest of my life! Twin A is very sassy and is definitely the dominant twin. She got a bit too aggressive with her twin brother and in turn earned her very first time-out.

She, of course, protested with the usual ear-splitting screams and giant tears as I walked her to our designated time out spot. She did her time and, when she was done, her brother walked right over, kneeled down beside her, softly touched her cheek and wiped away a tear. Be still, my mommy heart of stone!

2. When they play together.

I assume all twin moms dream about what great friends their twins will be, and how they will have their best friend by their side their entire life. But the reality of having boy/girl twins is that friendship could potentially be non-existent.

So, to see them play together, and I mean really play together (willingly sharing and taking turns, telling each other stories), brings a smile to my exhausted mommy face! I love to hear, “‘Mon, Ahlec (come on Alec),” and, “Me turn (Your turn),” coming from the playroom! Had I known how sweet those words would sound, I would have daydreamed about them while holding two screaming newborns.

I know I should dread this one, and by the twelfth time of reminding them that hitting is not okay, I’m over it.  But honestly, sometimes, it’s funny, hilarious, and somehow heart-warming, like everything is just as it should be!

Just yesterday while hanging a load of laundry in the closet, I heard the normal noises of siblings confrontation: lots of NO’s and MINE’s, followed by some loud screaming. I turned to reprimand them, and see them engaged in a full-on, hands flailing at each other, fight. I could do nothing but laugh. No one was hurt, and they were so baffled by my laughter it actually brought an abrupt ending to the fight… for about three minutes.

I LOVE to sit back and listen to my kids when they do not know I am listening. Hearing their cute little voices, listening to the new words they teach each other and how they just communicate and interact with each other turns my frown upside down.

In fact, if you ever wonder what you sound like to your children, pay attention when they are engaged in some imaginary play. They will use words that you use, they will say phrases that you say, and if you’re really lucky, they will even role-play conversations between you and your spouse. It is HILARIOUS!

Listening to their jabber and all the funny things they have to say to each other makes me thankful for these monstrous twinnies!

5. When they ask for each other

These twinnies definitely have their share of fights and squabbles, but they still prefer to be together rather than apart. There have been a handful of times where one twin has had to be taken to the doctor and the other one was left at home. This is the saddest ordeal!

The last time Twin B had to go for a sick appointment, Twin A was inconsolable. She held on to the doorknob after my husband and son exited for 30 minutes. I couldn’t do anything to convince her to come to sit with me; I even tried bribing her with sugar. She missed her brother and no one but he could make her feel better!

On the rare occasion that one twin sleeps longer than the other, I will sneak in and get the awake one and let the other one sleep. Once that sleeping twin wakes up, they are usually crying. When I get to them, the first thing out of their mouth is their twin’s name, followed by pointing to their empty crib. The twin bond is real. The very best part of this moment is the reunion. They depend on each other and feel the loss when the other one is not there.

7. The moment you realize they are not babies anymore

This moment could come anytime between 2 and 7 years old. I realized my “babies” weren’t physically babies anymore at two and half. It was lunchtime and I sat their sandwiches on the table and walked away to go get their cups of milk, and when I came back to the table both were sitting in chairs without boosters, eating their PB&J.

My future flashed before me: no more boosters in restaurants, no more high chairs in my dining room. At first, it was magical, but then it quickly became sad. Even though I do NOT want to rewind time and make them newborns again, I’m acutely aware that they will never be babies again! For every celebration of firsts these twins have, mom has a pity party in her heart. With every new first, an old first becomes a memory, and a child ages.

I know this is just the beginning of a lifetime of special (some good and some unpleasant) memories and milestones with my twins. And with every new stage I will think back on these moments and they will give me hope and encouragement that something heartwarming and endearing lies ahead.

I’m grateful that with every challenge they face, these two individuals will have each other to lean on and I’ll have a front-row seat for the show, enjoying every minute! 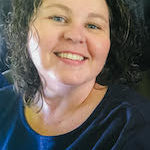 Amanda Hadley is a mom to a sassy six-year-old, and two-year-old wondrous monster twins. She is a mom first and a photographer and journalist second. She lives in Salt Lake City, Utah with her husband of 9 years. She spends her days repeating cliches she was sure she would never say, such as “because I said so” and “stop licking that”. She is an accomplished cartoon theme song repeater, and has no idea what is happening in current events and dreams of traveling to exotic places, alone. She enjoys hot cups of coffee, silence and Atlanta Braves baseball.

Related Articles – 7 Moments to Look Forward To With Twins