Home » List of Pixar Movies and Announcement of Luca! 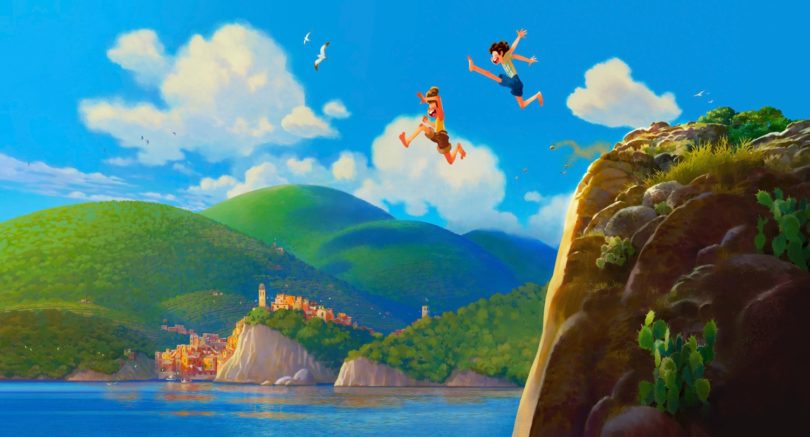 If you can’t watch Finding Nemo or Toy Story another time, get ready for a new Pixar movie to add to the list of Pixar movies to watch with your twins. TODAY Disney announced the next release from Pixar. Get ready for “Luca”.

Moments ago in Burbank California, Pixar Animation Studios announced that it’s next featured fill will be “Luca”. It will be directed by an Academy Award nominee Enrico Casarosa and produced by Andrea Warren who also produced the Pixar greats Lava (have you seen that yet? Please! I can get weepy just thinking about it!) and Cars 3.

You’ll have a minute till Luca is released. AS of now, it is set to open on June 18th of 2021. Hence the need for the incoming list of Pixar movies to watch below!

“Luca” will be a feature-length original animated coming of age story about a young boy and his memorable summer in a small seaside town in the Italian Riviera. Filled with pasta, scooter adventures, and plenty of gelato, Luca shares his summer with a new best friend, a sea monster. What? Yup, you read that correctly, Luca is best friends with a sea monster from another world that lies just beneath the surface of the water.

During an interview, director Enrico Casarosa, said “This is a deeply personal story for me, not only because it’s set on the Italian Riviera where I grew up, but because at the core of this film is a celebration of friendship. Childhood friendships often set the course of who we want to become and it is those bonds that are at the heart of our story in ‘Luca,’”

Enrico also talked about how in addition to the beautiful charm of the village, it really will highlight an adventure that will change Luca to his core.

If your twins are on the younger side and haven’t binge-watched Pixar Movies yet, you’re missing out. WAY before the twins were born my hubs and I would actually go to the theater for most Pixar releases. We’d go to a night showing and drown our insanity of work and family into a bucket of popcorn and a shared box of M&M’s.

The most recent movie, Onward, was also outstanding. If you haven’t seen it yet, add it to your list of Pixar movies to see. The whole fam got to enjoy a screening of it this past February in Disney Springs itself. We got a behind the scenes look at this movie and this was my daughter after it ended.

That’s literally not a joke. Anna (my Baby A) and I cried, like a full-on ugly cry. Pixar does that to us. It’s a good cry though. Even when they were little, we’d all end up in tears. I got used to it and would always grab extra napkins before we entered the theater when we knew it was a Pixar film. I imagine the same thing will happen when we watch Pixar’s Luca.

But NOTHING was as bad as Coco. That movie just threw us over the edge and I can’t even listen to the soundtrack without getting a lump in my throat.

My top 10 list of Pixar movies to watch with your twins:

Stay tuned for more details on Pixar and Disney too.