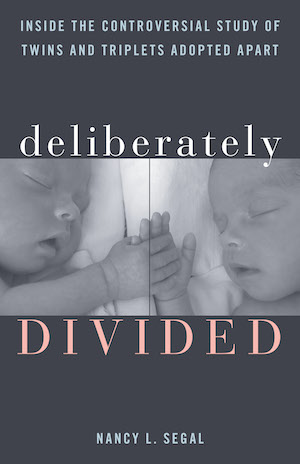 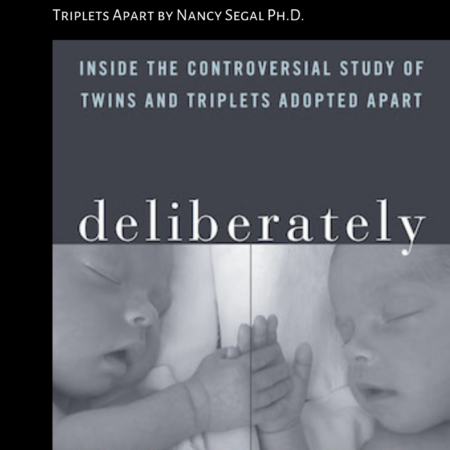 World-renowned twin psychology expert Nancy Segal, Ph.D. has done it again! She wrote yet another book delving into the twin world that you have to read to believe.

We know, we’re usually plugging twin books for the littles in our lives. Not this time. You really want to check this one out today.

Not only has she written several books about twin psychology, but she is also a professor in the Department of Psychology at California State University, Fullerton, and the director of the Twin Studies Center, which she founded in 1991.

We were lucky enough to score this amazing interview with her where she talks quite a bit about this shocking study. Take a listen wherever you get your podcasts while you hop on over to amazon and add Deliberately Divided: Inside the Controversial Study of Twins and Triplets Adopted Apart to your shopping cart. You won’t be sorry.

A brief summary of this remarkable twin book

In the early 1960s, a study was launched that aimed to track the development of twins and triplets who had been given up for adoption. An inside look at nature vs. nurture in a very disturbing way. The study was conducted by a prominent child development center in New York City and a psychiatrist from Columbia University. However, none of the adoptive parents were aware that they were raising a twin. The investigators insisted that the separation be kept secret. The study was controversial and disturbing. It involved separating twins and triplets without their adoptive parents’ knowledge.

Nancy Segal reveals the inside stories of the agency that separated the twins, and the collaborating psychiatrists who observed them until they turned twelve. This study was far outside the mainstream of scientific twin research and was not widely known to scholars or the general public until it caught the attention of documentary filmmakers. Recent films, Three Identical Strangers and The Twinning Reaction, left viewers shocked, angered, saddened. We all wanted to know more. Through records, letters, and other documents, Segal discloses the investigators’ attempts to engage other agencies in separating twins through adoption agencies abroad.

Nancy Segal Ph.D. has studied twins throughout her career. She is one of the world’s leading twin experts and has written about twin bonds and the ramifications of separating twins at birth.

Twin Mythconceptions: False Beliefs, Fables, and Facts about Twins by Nancy L. Segal, Ph.D. is available for purchase now on Amazon.com and at other fine local retailers.

You can also purchase her NEW book Deliberately Divided: Inside the Controversial Study of Twins and Triplets Adopted Apart on Amazon.com and at other fine retailers.

To learn more about the book and Nancy’s other twin books, visit Nancy’s website.