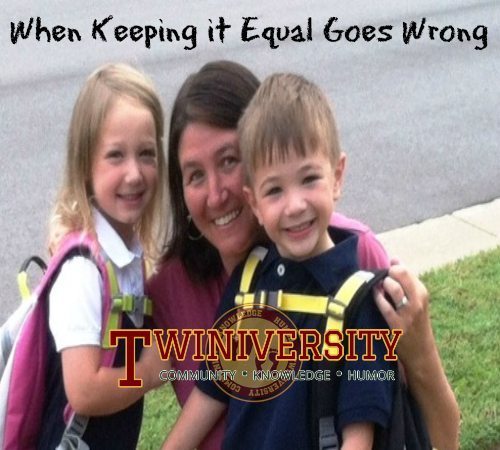 My obsession with keeping it equal between my twins started early.  I divvied up my pathetically small amount of pumped milk in exactly equal portions when they were newborns.  I gave each one the same amount of “lap time” when they were toddlers intent on reading Goodnight Moon, incessantly.   When my daughter was given a super cute nap mat for preschool, we found one equally as cool for my son.  If my daughter gets to accompany me on an errand by herself, my son is my companion the next time.  If one ends up with more stickers than the other on the reward chart, I really try to notice good deeds and behavior for the other to keep it close.  The list is endless, but the point is that I have always tried to ensure that neither of my children ever feel like I am giving more time, attention or “treasure,” to the other.

That’s probably why Kindergarten has really thrown me for a loop.  The inequity started the very first day of school.  My husband and I thought we had a great plan – I would take my son into his classroom first, he would take our daughter, and then we would switch just to say bye and good luck before each heading off to our full-time jobs.  Well, he went in to her classroom and she would not let him leave.  I joined my husband in her classroom — after telling my son that his dad would be there soon — only to find our daughter crying and clinging and very distraught.

By the time we finally got out of the classroom, parents were being ushered out of the building and he didn’t get a chance to visit with our son (he did peek in, though and all was fine).  The excitement of the first day meant that they didn’t get too caught up in the drop-off snafu, but it was definitely a factor in the longer-than-anticipated adjustment to being put in separate classrooms.  The challenge and futility of trying to be in two places at once for the sake of being fair to both children should have been the first clue that the “keep it all equal” strategy was not going to work.  Apparently, though, I need even more tortuous experiences to get the point. 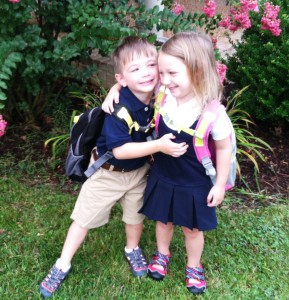 I tried to employ the same divide and conquer tactic at their first classroom party.   The parties were at the exact same time, but I thought I could go to one for a bit while my husband visited the other, then switch places, and keep both kids happy (since they proclaimed that EVERY other parent would be there and both desperately wanted us there, too).  Needless to say, it didn’t work out as planned.  My husband was unexpectedly unable to get off work (his presence was kind of integral to the one-of-us-in-each-room part of the plan), and a volunteer in my son’s classroom didn’t show, so I ended up on arts and crafts duty, solo.

As the kids in my son’s class were getting their instructions I raced down to my daughter’s classroom to tell her I was there, but that I had to be in her brother’s room for a while.  By the time I helped all of the children in my son’s class make their hand-print masterpieces, my daughter’s party was wrapping up.  I left my son once that activity was over, at which point he became upset that I couldn’t stay and eat snack with the whole class like “every other parent.”  I looked like an evil mom as I peeled him off of me and ignored his pleas for me to stay, only to arrive in my daughter’s classroom to one mad, sad, disappointed little girl.  I explained what happened and she seemed to understand, but she was also justifiably upset that her mom wasn’t there when it seemed to her that everyone else had someone special with them.

I vowed then and there to stop the inane efforts to do the impossible.

When the next party rolled around I did what I should have to begin with – I gave my kids the respect they deserve, as smart, thoughtful, rational little people, and just had an honest conversation with them.  We have already had to explain that since they have two working parents, we aren’t always able to make it to every classroom celebration.  I told them that it just isn’t possible, either, for me to be in two places at once, and that I would be volunteering in my daughter’s class this time.  They totally got it, and I feel like I have come full-circle.

In my fervor to not play favorites I had forgotten that when they were itty-bitty I had to make decisions about who needed me more all the time – and I guess that is still true today. It is impossible to truly keep things equal and fair at all times.  The important thing is that they know that we love them both very much, and will do everything in our power to be there for them whenever they want or need us.

I am going to make an effort to value their individuality a little more, and pay a little less attention to the measure of equal time and attention.  I am sure there will still be jealousy and complaining that one got something the other didn’t, or that more attention is going to one over the other for whatever reason, but I think that if our focus as twin parents is more on the quality of interactions rather than equal quantity, everyone will be happier!