Home » The Road to Adopting Twins 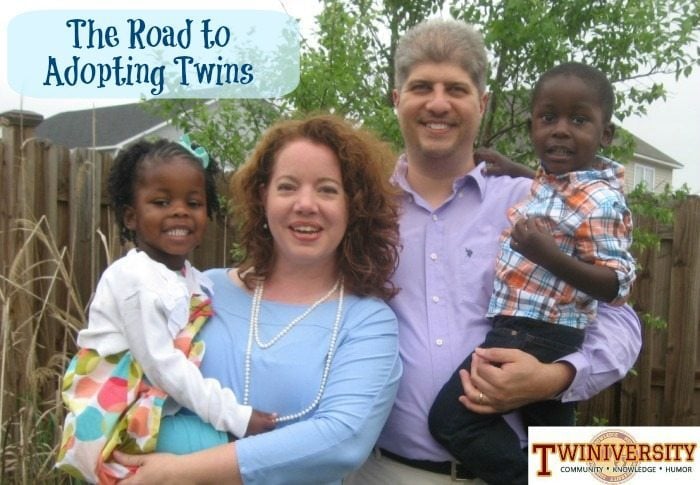 “Hi Theresa, how’s your day been? Have you been doing cartwheels now that school is out?” asked our social worker. I worked in the office of an elementary school.

“It has been great, and yes, we’ve all been doing cartwheels down the halls since school let out and we are finishing up the last minute things before summer break begins,” I answered.

“Well, you won’t have to do that much longer,” she said.

“Excuse me? What did you say?” I asked as I wasn’t sure what she meant.

And so began the most extraordinary phone call of my life!

My husband and I made the decision to begin the adoption process in February of 2010. We found many different adoption agencies online, but there was one in particular with which we felt very comfortable. I then got in touch with them to receive more information.

We learned all about the different types of adoption: domestic infant, international, foster to adopt, trans-racial, open vs. closed, special needs. Soon our thoughts were buzzing with all of the adoption terminology that we had never known existed. After much prayer, we decided to focus on domestic infant adoption.

We began by filling out an application with our agency. This is something akin to a college application on steroids! First is the initial informational section to give basic statistics about you. Essays on why you’re choosing adoption. Then several recommendations are needed from friends and family. Next come criminal background checks, medical exams, psychological clearances, several out-of-town informational meetings, creating profile books and finally the home study.

During a home study, a social worker is assigned to your case and meets with you a few times over several weeks to get to know you, find out about your parenting philosophies and, in general, get a feel for the type of people you are. We also talked about what adoption scenarios we would be open to. My husband and I both knew that we’d be open to any child regardless of gender or race and I was secretly hoping for a sibling match so that maybe an older brother or sister would be a part of our family as well. Our social worker told us that she had even heard of twins being placed once, but not to hope on that because it was very rare.

After a little over a year of jumping through these hoops, my husband and I finally got word that on March 3, 2011 we were approved to adopt. Now I could breathe. From much reading on the subject, I found out that after approval many couples could wait for years to be chosen by a birth mom, so I settled in to do my time. I didn’t want to “get prepared” for any babies just yet because I didn’t want to have loads of nursery items in my house for months or years just reminding me of the baby who wasn’t home with us yet, so our nursery stayed empty. Adoption is unique in that while you’re not physically pregnant, the anticipation is the same…instead of nine months the wait is indefinite. In May 2011, I decided we needed a crib, just in case. When it arrived, I left the unopened crib box in the nursery. That was all I could handle.

And then the phone call. On June 13, 2011 I came home from work and went for my daily walk. It was a beautifully sunny day and I decided to leave my phone at home and just enjoy some brisk exercise around the neighborhood. When I got home, I had a voicemail from our social worker saying that she hadn’t talked to me in a while and just wanted to check in to see how we were doing and to give her a call back. I didn’t think a thing of it and called her back. She picked up in just a couple of rings.

After I realized that she was talking about a birth mother choosing us for placement of her twins, I literally began to hyperventilate! The details became a blur. I can recall what she told me only in bullet points:

As I cried and tried to catch my breath, my husband walked through the door and heard me and got worried that something had gone wrong. I smiled at him through my tears to tell him everything was just fine.

We had nothing except the one crib still boxed up, but in a week’s time, through the love and generosity of friends and family, our house was outfitted for twins! We were given car seats, diapers, clothes, bibs, burp cloths, a swing, and strollers – everything we could have needed. We slept probably a total of eight hours that whole week trying to get everything ready and it finally came together.

On June 21, 2011 we met our son and daughter for the very first time. Both my husband and I cried and cried over the loss these two precious bundles had already endured in their young lives. But we also rejoiced that our home would be filled with their smiles and laughter.   We would now have the privilege to know and love these two children for the rest of our lives. The eighteen months of waiting were gone in mere seconds. And while I know its cliché, the extreme intrusiveness of the adoption process and the excruciating wait was all worth it once I held my children in my arms.

A private Facebook group for twin parents who adopted

Theresa Penev has been very happily married for almost seven years to the love of her life, Ventzie, and lives in Southeastern North Carolina. Together they are raising boy and girl two-year-old twins, Iliya and Nadia, who are very active and love to keep mom and dad on their toes. She is a stay-at-home mom and dreams of her family going to Africa someday. Her hobbies include travel, learning about other cultures, and creating new styles for her daughter’s hair.