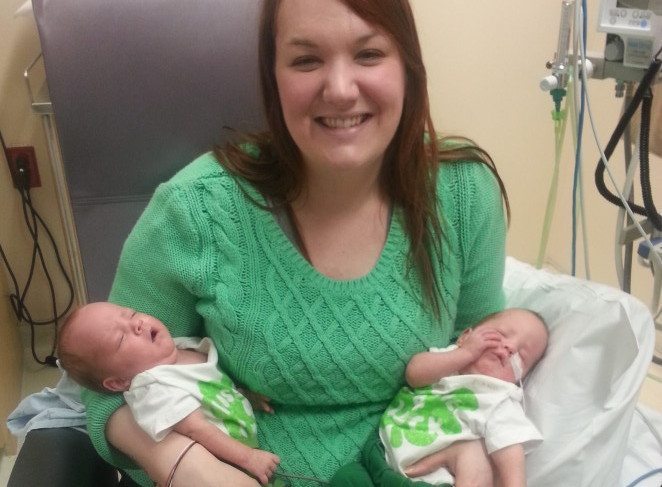 Before I became pregnant with my twin girls, I never paid much attention to types of twins. Of course, I knew about identical, fraternal, and conjoined, but I didn’t realize there were other types of twins. It wasn’t until our ultrasound technician told me at twelve weeks that I was having “mono mono” twins that I learned they even existed.

There are four distinct types of twins

The following chart illustrates when these types of twins occur after the egg splits. 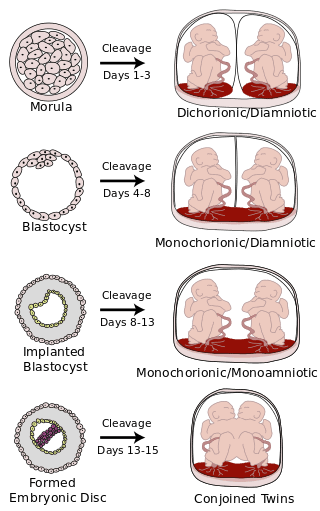 Since I had never heard of mono mono twins, I did what I suspect many would do; I turned to Google. I was greeted by scary statistics; that many mono mono (sometimes referred to as MoMo) pregnancies end in loss, including stillborn deaths; that one or both babies could die due to cord entanglements, twin to twin transfusion syndrome, or cord pinches; that all mono mono babies are delivered via c-section by 34 weeks at the latest, if not before then, and that many moms are admitted for inpatient monitoring at 24 weeks.

Everyone told me to ignore the statistics and to stop Googling before speaking with my doctor. So, I hoped that the internet was wrong — I hoped that my doctor, who had delivered my son and had been fantastic during my first pregnancy, would tell me everything would be fine, and that we would end up with two healthy, wonderful babies. Unfortunately, she simply confirmed that everything I had read was true. As she described the risks and how different this pregnancy would be, I cried. I cried because I already loved my babies, babies who were about the size of plums, and there was a chance we would have to say goodbye before we even got to say hello.

Every week, I was back at the hospital for ultrasounds and visits with my doctor, and it seemed like every week, something else was wrong. At first, we were told that Twin B had a two-vessel cord, meaning that they only had one vein bringing nutrients and one artery taking waste away, instead of two arteries. Then, Twin A had what appeared to be a small corpus collosum, which has been linked to developmental disabilities. Twin B needed an echocardiogram and extra ultrasounds to check on the kidneys because of the two-vessel cord and there was some concern that problems were showing up on the ultrasound. By fourteen weeks, the cords were tangled. 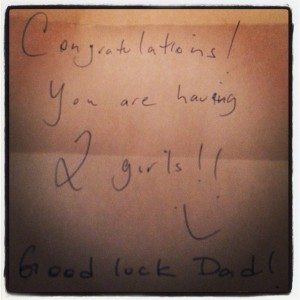 At 18 weeks, the ultrasound technician asked me if I wanted to know the babies’ sex. My husband was in class, so I said no, but as his birthday was coming up, I asked the nurse if she would write it down for me and put it in an envelope so we could find out together. On his birthday, after he had opened all his gifts, when we were out to dinner, I pulled the envelope out of my purse and, together, we opened it to discover we were having girls! After such a rough pregnancy with so much fear, it was sweet to think about having two little girls.

At 22 weeks, my husband and I met with a NICU pediatrician who described to us what it would be like if the girls were born at 24 weeks and what the NICU experience would be like. My c-section was scheduled for January 24, at 32 weeks + one day, so we knew the girls would be born early, but there was a chance that they would be born earlier. It was terrifying to hear all the challenges our girls would face, and even taking a tour of the NICU only calmed us a little.

At 24 weeks, on a Monday, my doctor asked me to decide if we would want the girls to be treated if they were born that early, I said yes, that we would want everything to be done to save our girls no matter when they were born. She decided to admit me as inpatient that coming Wednesday. I had one day to prepare at work and at home to be admitted to the hospital for potentially two months, which would include Christmas. We came up with a plan for our 19 month old son, and then, on the Wednesday, my husband and I went to breakfast, and then with my suitcase and pillow in tow, he brought me to the hospital. 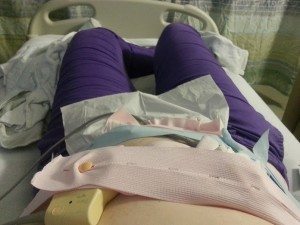 Every day I was to be monitored three times for twenty minutes. Of course, seeing as the girls were so small, they were hard to find and twenty minutes often turned into several hours, fingers cramping trying to hold on to the monitors to keep an ear on the babies’ heartbeats. Twice a week I had an ultrasound and their growth was monitored. I hated living in the hospital. Beyond the terrible food, my roommate constantly cried and I missed my son terribly. With Christmas fastly approaching, I was bummed that I would miss it, my favourite time of the year, and full of family traditions. After three weeks of inpatient care, my doctor discharged me to outpatient day care, which meant that I was back at the hospital for daily monitoring and ultrasounds, but meant I could sleep at home. It also meant that I got to be there for Christmas, after I spent the morning at the hospital.

January 6, at 29 weeks, I was back at the hospital for an ultrasound and doctor’s appointment. Though everything looked fine in the ultrasound, she wanted the girls’ heartbeats monitored. The nurse could not find two distinct heartbeats, and with lots of dips, my doctor readmitted me to the hospital. The plan was that if the monitoring went well that night and the next morning, I would be discharged back to outpatient day monitoring. Unfortunately, the girls had a plan of their own. First thing in the morning January 7, the coldest day we’ve had in years, my nurse could not get two distinct heartbeats, and with even more dips and cord pinches, I was banned from eating and my doctor was called. During rounds, the doctors told me, while I was still hooked up to the monitor, that I may be meeting my girls that day. I called Jason and he arrived in a flash. After spending the day hooked up to the monitor, with constant dips in their heart rates, and then with contractions starting, my doctor made the decision for the girls to be born. 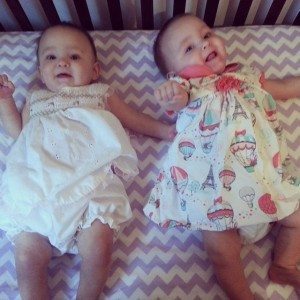 I was transferred to labour and delivery and given magnesium, meant to act as a neuro protector, which gave me hot flashes and made me feel sick. At 7 PM, after a day of waiting, I was wheeled into the surgical room. At 7:29, Twin B, Raegan Alexandra was born weighing 2 lbs, 4 ounces, and at 7:32, Twin A, Ella Noël was born weighing 2 lbs, 10 ounces. They did not cry when they were born and were whisked away before I could see or hold them. As I lay on the operating table, I watched on the monitor above me as the smallest babies I had ever seen were worked on by the NICU staff, and all I could think was they had so much hair for being so little. I wouldn’t get to meet them until the next day, and they wouldn’t be home for another 80 days, but my girls were both here. We had survived the pregnancy and beaten the odds. Now, at six months corrected, our girls are drawn to each other, just like when I was pregnant and they would find themselves heart to heart, and I know it was all worth it. 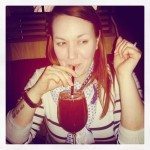 Alyssa Keel has worked as a social worker in both Canada and the U.S. for several years. Living in Toronto, Alyssa is mum to a rambunctious, curious, and loving two year-old boy and seven month old identical twin girls. During her high-risk mono mono twin pregnancy, Alyssa began blogging, an extension of her love of writing. Alyssa loves taking photos and impromptu dance parties with her son. Follow Alyssa and her family’s adventures at adventureswithmultiples.com.