Home » The Things We Do to Get Twins to Sleep 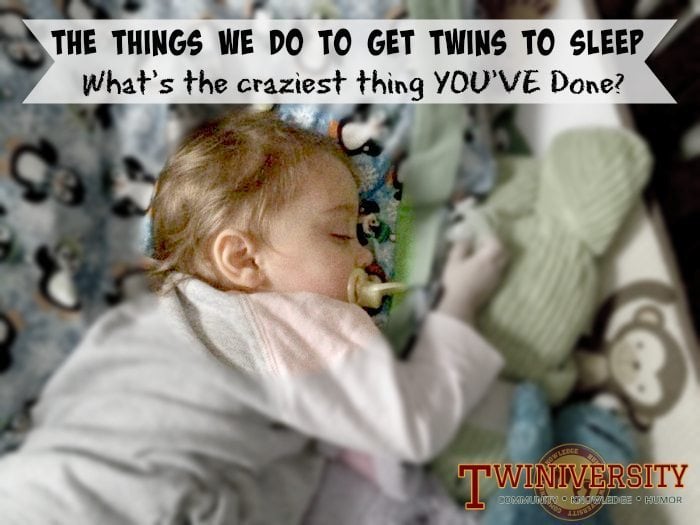 I think there were weeks where I slept only in ½ hour chunks. My memory of this time is fuzzy because I was basically existing in a haze of coffee and Pepsi. Then there was that horrible week when my twins were both sick and I slept sitting up on the couch holding one baby (then put her down sooooo carefully because her sister woke up). There were the nights when hubby was on the loveseat and I was on the couch each holding a baby, willing her silently to PLEASE go to sleep! I think we have tried EVERYTHING at one point or another. Unfortunately our girls have always responded to different sleep techniques. If left to calm herself, one eventually would, but her sister would become inconsolable and irate! My motto has always been that we need to do what works for our kids, at that time. 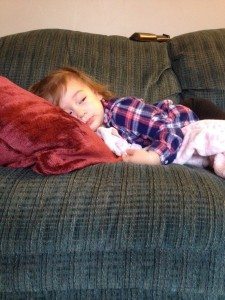 Unfortunately, as parents, there is a huge looming cloud of judgment that we feel from all directions: Some there, some imagined, some self-inflicted. We really need to stop judging each other, and instead support our fellow parents. If a solution is safe, and it works for your family at the time…really it is no one else’s place to judge. So in that spirit, please don’t judge me because I’m pretty sure we have tried everything and some of the solutions are clearly not my first choice. But when you have twins (or more) there is always another child to care for, so you can’t simply “sleep when they sleep”, because if they don’t nap together…(insert dramatic music) **dun dun dunnnnn**!!!!

Here is a list of the issues our girls have had over their almost two years and what we’ve done to try to solve those issues. I’m sharing not because I recommend all of these but it’s because when you are exhausted you struggle to think clearly! Hopefully one of these solutions might work for you. Some of them worked at the time, but I’ve found that between traveling to see family, colds, teething, growth spurts, and just growing up, we have about a 2 week window for any solution that seems to work before we have to try something new.

In the beginning, they slept well (at least from what I remember!) Around 4-5 months we had some major issues start up. They just didn’t want to go to bed.

We tried the following solutions…

We’ve also tired…sorry TRIED (can you tell what I’m thinking about?) moving their bedtime back later because they didn’t seem tired, AND also putting them to bed earlier because they seem to be getting OVERLY tired and then can’t settle down.

Currently at 2 years old we do bath, cup of milk while we snuggle for 15 minutes of their favorite show, brush teeth, read a story, select current favorite stuffed animal to take to bed (right now Sydney loves Big Bird and Kasey wants Abby Cadabby), say good night to the cat and the clock and then they go down pretty well (around 8:30pm). 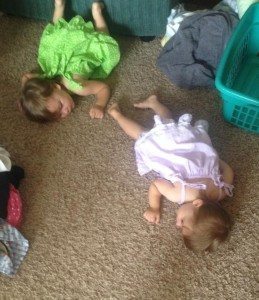 But now that I’ve said that I’ve probably jinxed myself — for tonight at least! I guess the moral of all this is that you might have to be a little creative and flexible in your solutions. If you have one baby that isn’t sleeping, you might be able to sleep in the recliner holding him/her but if you have TWO (OR more… triplet and quad parents you are incredible!)… what do you do? Just because something worked perfectly for someone else (and their baby slept through the night since they were 4 weeks old), doesn’t mean that it will work for you. And you shouldn’t feel badly if it doesn’t. It isn’t a reflection of your parenting abilities.

Ask around to get an idea of what others have tried, and if your solution doesn’t seem to be working for you and your little ones, keep trying until you find something that does. They won’t be having issues falling asleep or waking up in the middle of the night like this forever… (Right? That stops sometime before they move out? Right?! Please tell me that’s what you’ve heard too!) Get creative, be flexible, try solutions that you think will work for your and your babies and hold on to the hopeful thought that someday you’ll look back on this and you’ll think “…not my greatest moments for feeling (or probably looking) well rested but we got through it!”

Hang in there Mamas and Daddies! 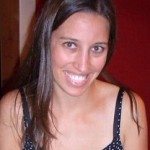 Stephanie Cleland is a high school teacher who traded in her teen students for adorable twin toddlers and now spends her days entertaining her 1 year old “twinadoes”. She married her college sweet heart, Kirk, and her hobbies include scrapbooking and other creative projects. She also is working on a blog ilovemytwinadoes.weebly.com.

How Sleep Training Worked for Our Twins