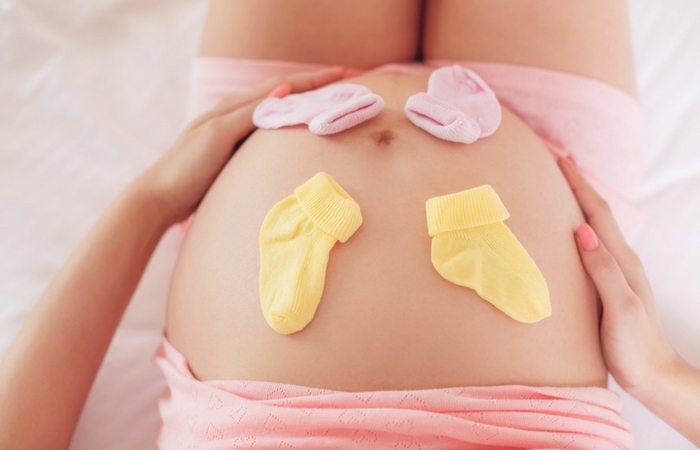 During my 38 weeks of twin pregnancy, I worried frequently about delivery. I Googled “premature twins” and “micro-preemies” as well as “preeclampsia” and “gestational diabetes.” I had never had a c-section, and knew there was some likelihood that I would need one, depending on baby A’s presentation.

As I came closer to full term, we discussed my twin birth options at length with my obstetrician. At the time, baby A was head down but baby B was still frequently changing position. She once flipped from breech to vertex during an ultrasound, and at the next appointment was back to breech. We discussed the dangers of delivering a second twin breech and the possibility that she would assume a position that would not be conducive to a vaginal birth, necessitating a c-section after a vaginal delivery. However, all of this being known, we all felt it was reasonably safe to attempt a vaginal birth.

My induction was scheduled for 38 weeks and 1 day. I had this silly idea that multiples would get priority on the induction schedule, but I was wrong. I dutifully called the hospital one hour before “go time” only to be told that too many women had gone into labor naturally overnight and all rooms were taken. They would call me when they were ready for me.

Fast forward 14 hours and we finally got the call at 10 pm. I couldn’t have been happier to waddle into the hospital, even though I knew that my husband and I would be up all night and then not sleep for the next… well, we haven’t really slept yet 7 months later so… yeah, a while, LOL.  I was offered a wheelchair which I refused, still holding on to a shred of hope that walking the halls would induce labor.

My old friend Pitocin (used for my three previous births) was started by midnight. My doctor had gone home to sleep and instructed the resident to call her once I was close to delivery. Due to the fact that the OR was in use, my water was not broken until it became available. By that time, only an hour later, I was already dilated to 5 cm, but had yet to feel any pain. We had already decided that I would have an epidural as my doctor had described the process of potentially pulling out a breech baby B as “quite uncomfortable.”

When the anesthesiologist walked in, I expressed that it felt absurd to have pain medication when I was not yet in any pain (aside from my at-that-point normal everyday screaming back/hips/ribs). Besides, my last baby had been born with no pain medication, and it had been very tolerable. The anesthesiologist was wonderful. He sat down by my husband and we discussed options. In the end, we agreed to have him place the catheter in my back but to only put in the absolute minimum amount of medication to create a closed system (no open ports hanging about my back). He would not administer any type of narcotic.

My amniotic sac was finally ruptured. My feet went a bit tingly, and I started to feel the contractions. Having been through this labor rodeo before and being both quite exhausted already, my husband and I settled in, me lying on my side in the bed, him resting in a rocking chair. I breathed, he encouraged, and we rested as we were able. The contractions quickly drew closer together and became more painful. I let my nurse know that we could “turn up” the epidural when the anesthesiologist was available again. He came back in after about a half an hour and added medicine to the line. It worked quickly.

At 5:00 am when the resident checked me, I was fully dilated. My doctor was called and I was wheeled into the OR. I was amazed by the team prepping to care for our daughters. A nurse assisted me in scooting from the bed to the operating table and I was instructed not to cough or laugh as baby “A” was trying to make her entrance before my doctor arrived. I laughed and was admonished – “No, really! Don’t laugh!”

Soon all doctors were in place and I was finally instructed to push. Moments later baby “A” arrived, crying her now-signature “angry scream cry.” I watched as she was checked over and weighed (7 lbs 10 oz!) and finally brought to me, where she quieted on my chest and I cried big ugly face mama tears.

Things were happening to my nether-regions as I got to know this daughter. I heard snippets “turn the Pitocin back on!” “which umbilical cord is this…” “head down…” and I felt a whoosh as the second amniotic sac was broken. Sixteen minutes had elapsed. Baby A was taken away and I was instructed to push. I did, splashing everyone at the foot of the table with a tide of fluid. Baby “B” began to emerge face up, squinting at the absurdly bright OR lights. Because she was “sunny side up”, I had to push harder to get her out. My doctor guided her head and the anesthesiologist held me in a sitting position to push most effectively. I made some bodybuilder faces, feeling my skin stretch around her little face, and in another minute baby “B” was out safely, all 7 lbs 8 oz of dark-haired sweetness. We did it!

The placentas were delivered and I asked to see them, just out of curiosity. My doctor brought them over in a steel bowl. She showed me how the amniotic sacs and umbilical cords were attached and which side of the placentas were against the uterine wall. Amazing! And nauseating!

We were then paraded back (nurses, residents, bassinets with babies, and my husband too!) into the labor room for recovery and bonding. The vaginal twin delivery had gone beautifully. The next several months would be the most difficult of our lives, but our babies had arrived safely and we were so very blessed.