Home » 4 Reasons I Wish My Teen Twins Were Not Identical 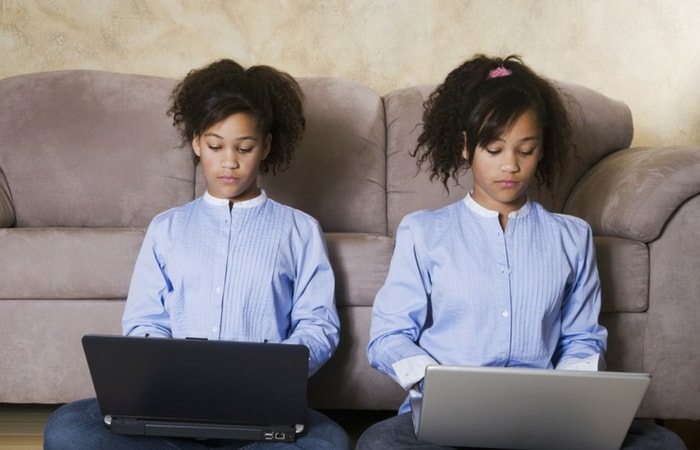 Don’t judge me. You don’t even know. My teen twins are absolutely the light of my life. They have made me the tired, anxious, slightly neurotic mom I am today. Just shy of 14 years ago I was whisked from an ob exam room into the ultrasound room so they could “count the babies.” What. The. Crap?!? Twins! 2 placentas and 2 sacs. Twins. 1 girl and 1 camera shy little acrobat. My regularly scheduled ultrasound showed our mystery little to be another girl. 2 girls. Twins.

Then came their birth. So rushed and hectic I completely forgot about sending the placenta out for additional testing until weeks after the fact, when the pediatrician asked if I was sure they were fraternal because “Gosh, they look identical to me.” Oddly, no one can tell them apart. 12 years later they were still arguing with friends, family, even complete strangers about being fraternal. I always knew there was a small chance they might be identical, but as their mother, all I see ae their differences. Kendall’s hair is a bit thicker, Kaydence’s nose a touch wider. Still, no one can tell them apart. So, for their 13th birthday, we decided to FINALLY have them tested. Having an April birthday we ordered the kit in early March, swabbed and sent it back to the lab. Five days before their 13th birthday the email came. Identical. They didn’t seem to care much but to be honest, my heart sank for them. Just a little bit.

You see, in the 13 years prior I had a bit of hope that at some point one of my girls would grow an extra 4 inches, or their hair would lighten or darken drastically so that people would be able to tell them apart more easily. None of those things will happen. Now, I know I should be in awe of my little freaks of nature, and I am. But I’m a little sad for them too. I’m sad that this confirms that a life ahead is filled with my daughters’ sharing an identity to the outside world. Realistically, they share an identity too much of their inside world too. 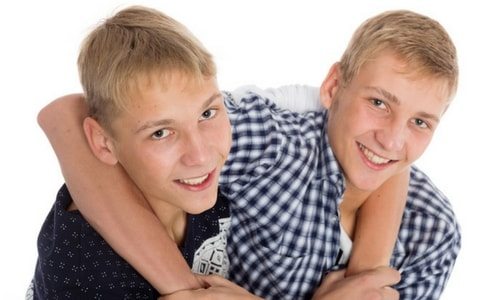 They recently started 8th grade at a new school. They have been in classes for over 8 weeks now and have teachers who not only admit they still CANNOT TELL THEM APART, but admit they aren’t even going to TRY and learn to! Now, as a mother, I really want to call a school meeting or a national press conference. Maybe we can put them on a stage together and play circle the differences. Maybe the prizes are cookies or the ability to leave the premises and return to their loved ones. I haven’t quite figured that part out yet. But the problem is that my girls are 13 now and they want to “handle it on their own.” I’m not even sure what that means, but I’m pretty sure I’m supposed to at least let them try. They have asked if they could call the teacher in question “teacher” all year instead of her name. Apparently, she has decided she will call them both “Twin” this year and has done it a few times already. She has been surprised each time they fail to respond. Huh…..go figure. The immature part of me says to call her “Dummy.” The mother in me wants to set up a parent-teacher conference to slap her. But the grown up in me instead gives my girls the power to correct her each and every time before responding to her request.

2. They are seen as the same person

Most teen twins I know don’t necessarily mind people mixing them up, especially new people. They expect it for a little while. But they (at least my twins) do mind being viewed as the same person or even interchangeable. I know they don’t mind a teacher or classmate asking them to stand in front of them so they can look for ways to tell them apart. They also really appreciate the grandparent who asks them individually what they want for their birthday as opposed to buying 2 of the same thing, throwing them in a gift bag and slapping a tag labeled “girls” on it. Trust me, it’s happened. 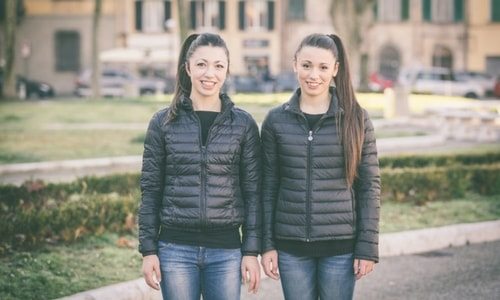 3. Even I mix up their names

It’s these types of things that make my life more difficult than it needs to be. Any parent who has more than one child occasionally runs through all their names looking for the right one from time to time. I was routinely called “Kath-Ro-Megan” by my grandmother as a kid. No big deal. I don’t get that luxury with my twin teens. If I call Kendall her sister’s name she gets upset until I explain, yet again, that I didn’t see her and thought she was her sister. The same is true with Kaydence. It’s really not fair. Looking like you’ve lost your mind while trying to get your child to get their shoes off the stairs while calling out the name of every child you’ve ever laid eyes on is a time-honored tradition. It’s a tradition I have no participation in with my girls.

Then there is the newer subject of boys. Remember that bit about not being the same person, not being interchangeable? Yeah, it seems that many of the boys who like them, like THEM both. And even they seem to think they’re basically the same person. If Kaydence doesn’t return the boys’ feelings it’s okay because maybe Kendall does. It’s like they have 2 whole chances to get the girl they like to notice them. It’s annoying and obnoxious, but of course, they don’t mean any harm. They are taught by the adults around them that these girls are one in the same. There have already been a number of boys sniffing around. God help me when they get to high school NEXT YEAR! 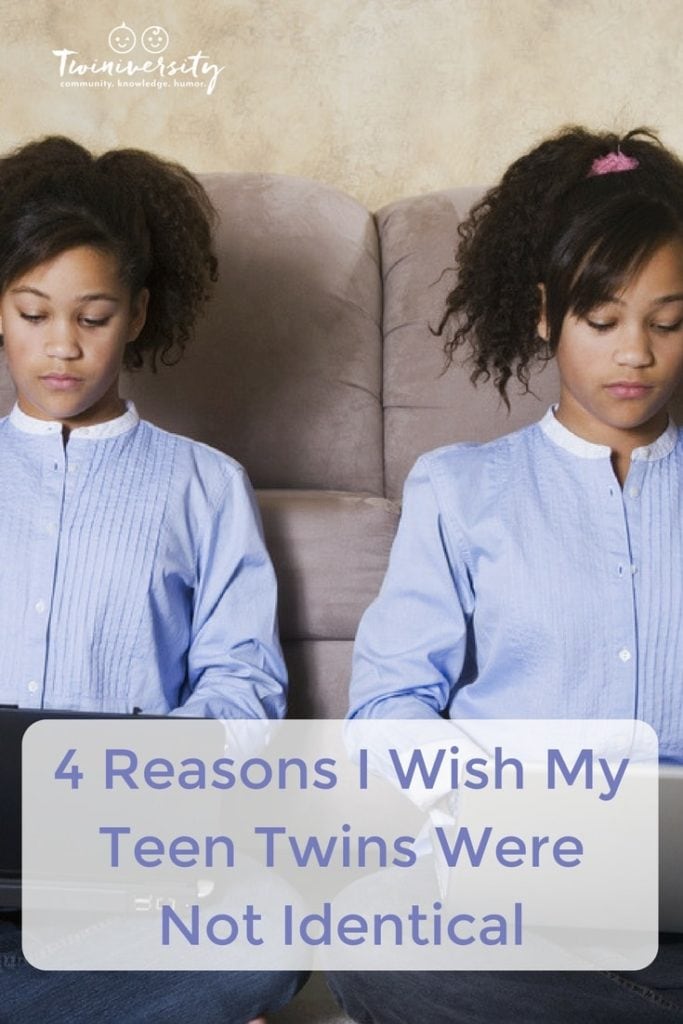 Now, don’t get me wrong. I am completely and totally aware and appreciate just how special my girls are. I know how lucky we are to have them and wouldn’t trade them for anything in the world, except maybe a Klondike bar. This is our reality. They are identical teen twins. They will have to deal with the good and bad that comes with being an identical twin forever. As they become adults and move on with their own individual lives maybe it won’t matter so much. Maybe their co-workers won’t even know they have a twin out there living a whole separate life. I guess we just need to wait and see what their adulthood brings. 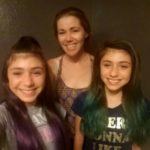 Megan Loden is a stay at home mother of twin 13 year old girls and a 9 year old boy.  She lives in Goodyear, Arizona with her children, husband, 2 dogs, and 2 cats.  When she is not busy with her kids or pets she can be found working out at home, writing, or, in the cooler months, enjoying the nice weather on walks around the neighborhood.

Mom Confession: Motherhood Is Nothing I Dreamed It Would Be