Home » Sleep Training Twins: It’s a Marathon, Not a Sprint 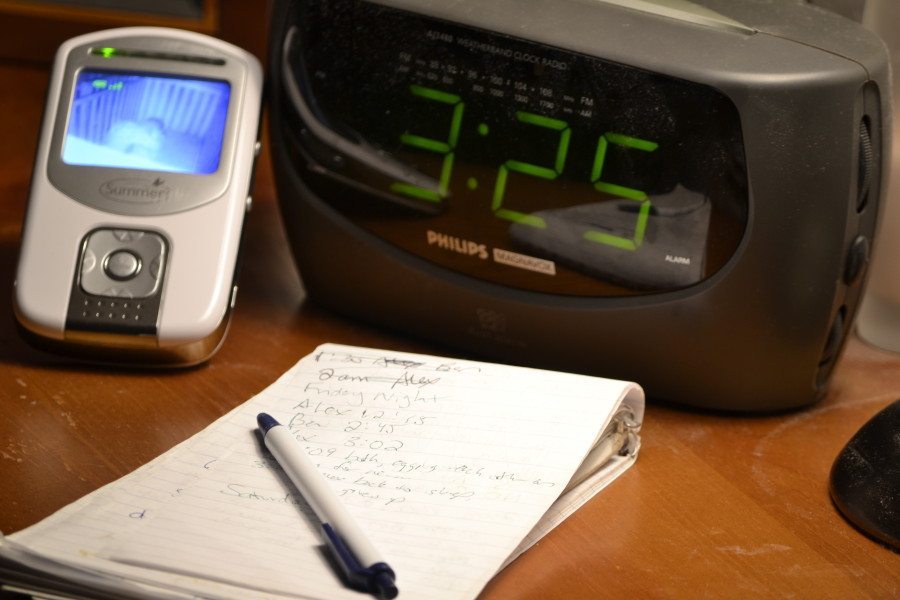 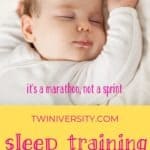 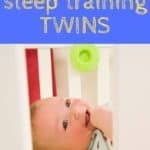 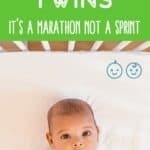 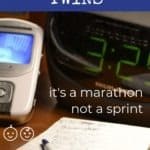 When it comes to sleep training twins, it’s a marathon – not a sprint! This twin mom explains how she sleep trained her twins and finally got some sleep.

When my first son was a baby, the term “sleep training” was a foreign concept to me. We co-slept until he was 18 months old, so I didn’t care if he woke up in the night. I could nurse him back to sleep without having to open my eyes. He eventually taught himself to sleep through the night, but I could not tell you when it happened because I never took notice.

Then my twins arrived. Co-sleeping was simply not a feasible option with two. And suddenly I felt like a new mother all over again, without a clue what to do.

My husband and I would spend more than an hour each night rocking or holding a baby apiece, waiting for them to fall asleep and then performing what could only be described as a “stealth move” to gently shift them to their bassinets. We prayed they wouldn’t wake in the transfer; if they did, the process had to start all over again.

I knew we needed help so I went searching for books on sleep training. The one that resonated the most with me was “Healthy Sleep Habits, Happy Twins,” by Marc Weissbluth. In his book, he talks about the need to put your baby down while they are drowsy but still awake, so that they learn to soothe themselves to sleep.

With the blessing from our pediatrician that our twins were ready to sleep train, I immediately got to work on the concept. I threw the pacifiers in the trash, choosing to instead teach the boys how to soothe themselves by sucking on their own fingers. Once the pacifiers were gone, it was time to remove ourselves.

The first night, I laid each boy in his bassinet, drowsy but awake, and I stepped away. I couldn’t bring myself to leave the room, so instead, I crouched down beside their beds, hidden from view, and waited. I heard a few fusses, some meager cries, and within five minutes they were both content. That was the easy part; I only wish the rest had been so simple.

Getting the babies to fall asleep on their own was just a fraction of the equation. Sure, I had the bedtime routine cut down from 1.5+ hours to 20 minutes, but what about the rest of the night? My boys exclusively nursed and suffered from reflux, so I was afraid to limit the nighttime nursing that I was sure they still needed. But after 10 1/2 months without a solid stretch of sleep under my belt, the late-night snacking was taking its toll.

I had finally had enough. I returned to my good friend Dr. Weissbluth for answers, hoping for a magic key to getting the babies to sleep through the night.

In his book, he suggests three sleep training methods, which stair-step in intensity.

1. The first is to comfort your babies immediately when they cry, but do not pick them up out of bed and do not nurse them. This process can be repeated as often as necessary until the babies settle back to sleep.

2. The second method is a somewhat graduated version of letting your twins cry themselves to sleep, or “cry it out.” You set time intervals for when you will go in to comfort them. For example, you let them cry for 10 minutes before you comfort them the first time. If that doesn’t work, wait 15 more minutes before consoling them, then 20 minutes, and so forth. The hope is they will fall back asleep on their own before you return.

3. The final method is simply to let your babies cry it out until they fall back to sleep on their own. This method takes determination and a heart of steel, but many parents swear by it, as evidenced by testimonials in the book.

My husband and I sat down and thoroughly discussed each method. We were both initially opposed to the idea of letting our babies cry it out, so we settled on a compromise: we would try each of the three steps, in order, until we reached success. I would keep a journal by my bedside to take notes regarding who was awake at what time, and what method was used to get them back to sleep.

We bought a video monitor, so we would know which baby was crying without having to enter their room. And we decided that we would not separate the boys during this process, since they will be sharing a bedroom for the foreseeable future. We figured it was better to sleep train them together and let them learn to tune one another out along the way.

The first two steps were absolute failures. We were still getting up all night long, and nobody was sleeping. By the sixth night, we were desperate, so we threw out all our reservations about letting the boys cry it out. And it worked! We had one 20-minute stretch of crying the first night, and each night got better from there. My boys were finally sleeping through the night.

I wish I could say that this is where the story ends. Unfortunately, that’s not the case. Every time the boys cut new teeth or get sick, we are right back where we started.

My twins are now 21 months old, and we still endure sleepless nights. But every time the ailment passes, whatever it may be, we return to the method that worked for us, and we get the boys back on track. That is the key for any parent trying to sleep train their multiples: find the sleep training method that is right for you and your family. Read the books, talk to fellow parents of multiples, be open to all ideas, and feel free to pick and choose the techniques that work for you.

The only absolute I will place on you for sleep training is that you and your partner must be on the same page and work as a team in this process. After all, sleep training two (or more) children at the same time can be a grueling task. But the rewards will pay off infinitely in the end.

Sharon Knight is a former Emmy-award winning television news producer, who took time off from the working world to become a full-time mom when her identical twin boys were born in April of 2012. She also had a 22-month-old son at the time, and found that “3 under 3” was the perfect excuse to shift gears. She could not be happier spending her days surrounded by her little men. Just like all mothers of multiples, Sharon wears a dozen different hats throughout her day, but her favorite is being a teacher to her three young students, helping them learn something new about the world they live in every day. In her very limited spare time, Sharon loves to write. She lives in Southern Colorado with her husband and three boys. Visit her blog at http://srbknight.wordpress.com.