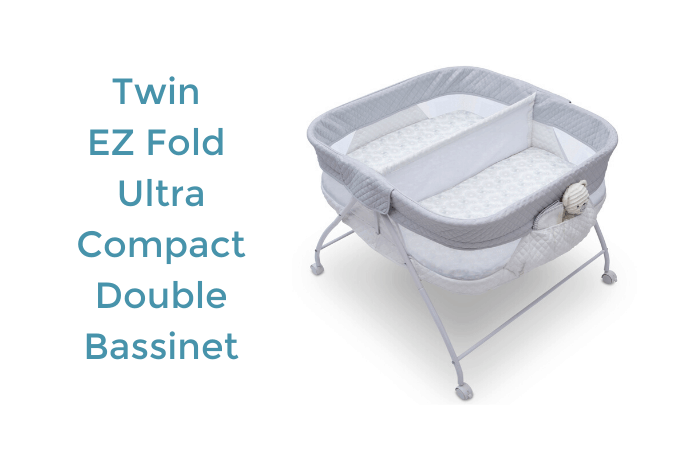 Looking for a twin bassinet to give your newborn twins a more portable and safe sleep option? Check out the Little Folks Twin EZ Fold Ultra Compact Double Bassinet by Delta (CLICK TO BUY). In this video, Nat will give you the full scoop on this new option for twins and give her honest opinion on it.

What is the best bassinet for twins?

The Little Folks Twin EZ Fold Ultra Compact double bassinet is a great option for twins. Compared to other twin bassinets on the market, it's a lot more reasonable in price and it has a really nice feature others don't– it folds up! This is a really fantastic feature if you've got a small home and you need to maximize your living space. But really, even if you have a palatial estate, with twins you have double the baby gear and every inch of space is at a premium!

Can twins sleep in same bassinet?

Should twins sleep together when newborns?

In a single bassinet? No. It's just not going to be big enough. A twin bassinet is a much better option. If you're talking about cribs, we recommend buying two cribs but you can get away with using just one crib to start. Your twins can share a crib as newborns as long as you and your doctor are on the same page about it. We recommend placing your twins with the tops of their heads almost touching in the center of the crib and their feet on opposite ends of the long end of the crib.

Are there cribs for twins?

You may be able to find a crib specifically made for twins with a permanent divider but we don't recommend these, simply because what if you want to separate them? Not all twins do well sleeping close together. Some have a hard time sleeping through each other's cries and if that happens you'll be glad you got two separate cribs. Buying two cribs gives you way more options for rearranging the nursery as their needs change.

Do I need 2 cribs for twins?

It is highly recommended to start out with 2 cribs, even if you only use one crib for a while. Give yourself the flexibility if your twins don't actually like sleeping together. But you can start with a double bassinet and move up to cribs later on.

Where do twins sleep when newborns?

There are several options for where your twins should sleep. The AAP recommends that your babies sleep in the same room as you for the first year of life. This would mean using a twin bassinet, a twin pack n play, or mini cribs to fit in your bedroom. However, if rooming in with your babies isn't working out (many parents report that nobody gets any sleep this way) you can have your twins sleep in cribs in their own room. We suggest using a video monitor in this scenario so it's very easy to keep an eye on them.

5 Tips for Surviving Nighttime with Twins