Home » Hard to Swallow: My Baby Had Dysphagia 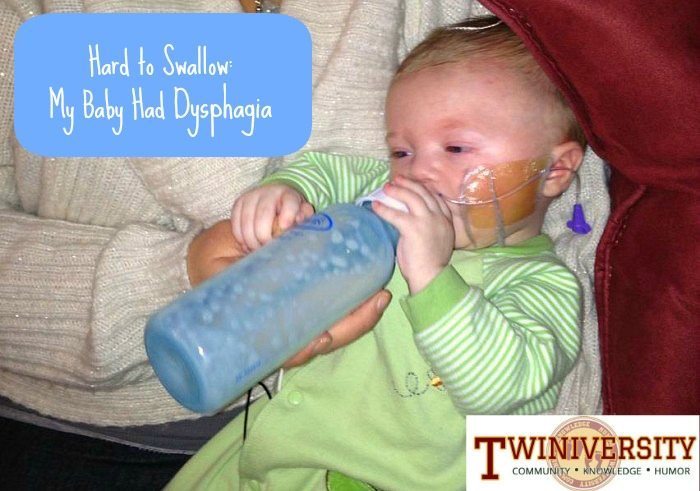 My twin boys were only 2 weeks old when I first noticed it. My Baby A, Desmond, would have really strange “episodes” where he would get so upset, so worked up with frustration and anger, that he would suddenly stop breathing for about 10 seconds, turn purple, do what looked like a “silent scream” — and then finally gasp for air, screaming the most blood-curdling cry you’d ever hear.

It scared the crap out of me every time it happened and there seemed to be no rhyme or reason for it happening.

As a new mom, I didn’t realize at the time just how unusual this was. I called my pediatrician and explained what was happening. After they asked me various questions, I was told to keep an eye on him as long as everything else was normal. At our 1 month well-baby check up, I brought it up again. At that point it was happening 2 or 3 times a day. I asked our pediatrician, “Is this normal?” And she answered, “It’s definitely not normal, but it’s not unheard of. I’ve seen it happen with toddlers who throw tantrums and hold their breath intentionally, but I’ve never seen it with a newborn.” It didn’t seem to be hurting him and he was eating OK and gaining enough weight, so we decided to keep an eye on him and I was to report back if it got worse. 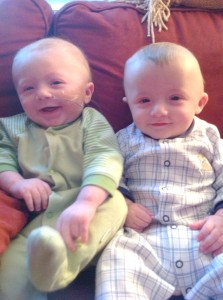 Desmond (left) with his feeding tube and his twin Alec

As the weeks passed, it was happening more often. And I noticed it usually happened around feeding times. There was a pattern where Desmond would get about half-way through his bottle and suddenly start refusing it, crying, and shrieking in frustration, which would then lead to one of these breath-holding episodes but not always right away — sometimes it was 5 – 10 minutes after eating before he’d have an episode so I wasn’t completely sure if they were connected but I had a hunch they were. At 6-weeks-old, I started recording every time it happened in our daily journal. One day it happened 6 times! After one particularly frustrating morning, I decided that he needed to be seen again and this time I would bring a bottle with me in the hopes that a doctor could witness it happening.

I remember this day like it was yesterday. I brought him alone, with my husband at work and my mom watching his twin brother. I saw a different doctor in the practice because she was the only one available at the time and I relayed my story again. Dr. C was happy to watch while I fed him and we talked for a while about what could be the problem. Desmond ate pretty well for about 5 minutes and Dr. C went to get us some formula samples while I continued. At that moment he started having another episode. I called out to Dr. C, “It’s happening again — come in here!” She rushed back in the room and when she saw my son turning purple she yelled out to the nurse — “Get in here — we might need to call an ambulance.” I called his name over and over again, gently jiggling him in the hopes he would breathe. I  finally blew a quick breath into Desmond’s face (my signature trick for snapping him out of it) and he finally breathed! Dr. C said, “Oh my God. This is serious. I’ve never seen that happen before. You need to get him to the children’s hospital ASAP — you’ll check in through the ER and you’ll stay there with him until we figure this out — at least overnight.”

I was so scared, but so much more relieved that finally a medical professional had witnessed this and was taking it very seriously. We were finally on our way to figuring out why my poor sweet baby was suffering from this. 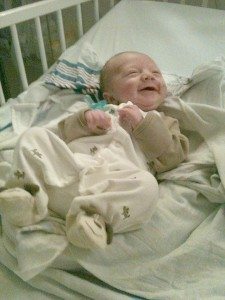 Checking out of the hospital – HOORAY!

We checked in to Lutheran General Children’s Hospital and the staff there were amazing. They immediately put him on a feeding tube since the initial episode happened while he was eating. We had no idea how long we would be staying but the doctors assured us that we would stay as long as it takes in order to figure this out. The first two days were full of tests. They needed to rule out that it was a breathing problem, a heart problem, or a neurological problem. With each test that came back normal, I breathed a huge sigh of relief. But then it just became more confusing — if he’s passing all these tests with flying colors, then what is wrong with him?

By the end of the second day they had ruled out all major issues and everything was starting to point towards a problem with swallowing properly. The doctors and speech pathologist speculated that since he was on the feeding tube for 2 days and hadn’t had an episode since, this was likely a factor. They performed a “video swallow study” on him, which is a video x-ray of him drinking from a baby bottle. The swallow study showed that tiny drops of formula were flecking into his lungs because his esophagus hadn’t fully developed! The speech pathologist tried different nipple flows and added a thickener to the formula (Simply Thick) and once she tried the preemie flow nipple he could suddenly eat normally! AMAZING! I felt such a relief that we finally had an answer — Desmond was diagnosed with dysphagia (swallowing difficulty). But we still didn’t know what was causing him to hold his breath and we needed to do a throat scope to figure that out. 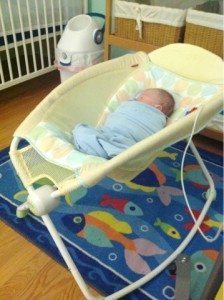 The 3rd day was Desmond’s scope, which is actually more involved than you’d think — it’s considered an outpatient procedure. The Ear-Nose-Throat doctor performed this and they had to put him under twilight sedation (which made me very worried) and stick a thin, long piece of metal down his throat with a camera on it so they could see what was going on. I waited with my mom in the waiting room and I was a nervous wreck. We got the page that he was in recovery and we went in to meet with his ENT. Dr. W explained that everything in his throat looked normal but something strange happened during the scope. Even though Desmond was in twilight sleep, as they placed the scope in his throat, his entire airway clenched up in a spasm and the airflow was shut down. After a few seconds he relaxed and breathed again, but this finally explained what was happening when he had his episodes.

I can’t tell you how relieved I was to find out that what he was suffering from was minor, was treatable, and that I could expect him to just grow out of this within a few months. WHAT A RELIEF!!! I had prepared myself to hear the worst and I cried tears of joy just knowing that everything was going to be OK. We would have to make major changes to help him for the next couple months, but I was willing to do ANYTHING to ease my baby’s suffering and help him eat normally again. 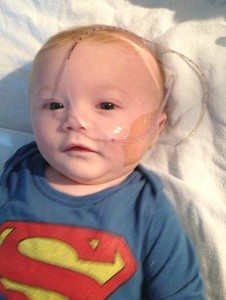 We stayed in the hospital a total of 7 days. We continued feeding him through an NG (naso-gastric) tube attached to an electronic feeding pump and the speech team helped us practice bottle feedings to make sure Desmond didn’t lose his sucking skills. The new plan was to feed him with a Dr. Brown’s bottle with a preemie nipple, mixing Simply Thick* with the formula. We had to time his feedings to make sure he didn’t eat longer than 25 minutes or he’d start burning more calories than he was eating. Then we had to measure out what formula was left in the bottle and subtract that from the number of milliliters he was supposed to have at each feeding — and then put that in the feeding pump for a 30 minute feed. Are you exhausted just from reading that?? I don’t blame you! This was an extremely difficult part of his recovery. I had to train my husband and caregivers on how to use the pump, how to measure formula and do the math, and how to mix the thickener. It was pretty much a nightmare. But with every step we had to take I would say a little reminder to myself — a lyric from the musical Avenue Q — “It’s only for now…. only for now… everything in life is only for now…” and that helped me to get through.

So are you ready for the happy ending?? After 3 months of treatment, Desmond took his follow-up swallow study and he PASSED!!! When I heard the words come out of his speech therapist’s mouth, everything came out of me. I bawled my eyes out and hugged my husband and gave Desmond a million kisses. You’d think I had won the lottery! It definitely felt like it at that moment. I was so grateful that my son would be able to eat his bottle like a normal baby. That first bottle after the feeding tube was removed was absolute BLISS! 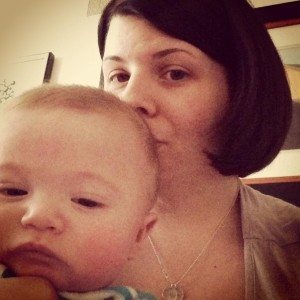 After NG was removed for good!

We still don’t know why he had his “episodes”. But as the months passed he rarely had them anymore. I think as he has gotten older and has learned how to cope and self-soothe that the problem fixed itself. I was even able to sleep train him and his brother at 6 months old and we didn’t have any problems with episodes at all. He’s now 16-months-old, swallowing like a champ and eating like a horse, and he hasn’t had an episode in so long that I can’t even remember. Babies are really incredible. The amount of growth that they endure in such a short period of time is just mind-blowing. This experience really brought my husband, my family and I together and we formed a tight team — even tighter than we were just raising “normal” twins! LOL!

For more information on Pediatric Dysphagia, visit the American Speech-Language-Hearing Association and if you need moral support or have questions, feel free to email me.

* Please note that while Simply Thick is an amazing product, note that it is not appropriate and can actually be harmful for some premature infants according to the FDA. See this advisory for details. There are other methods of thickening that can be explored with your medical professionals. 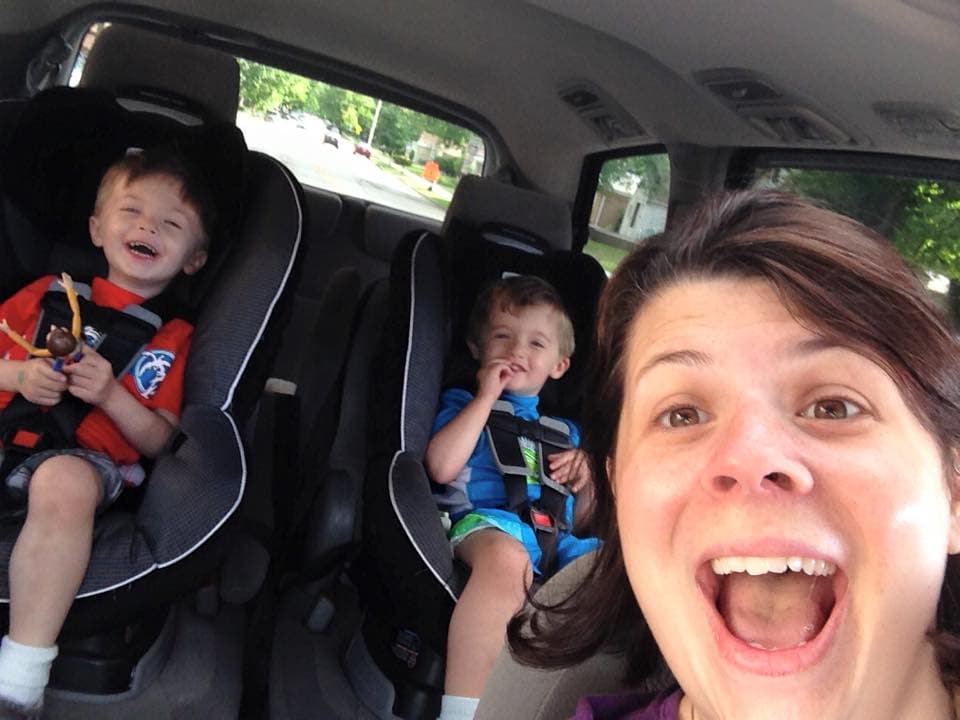