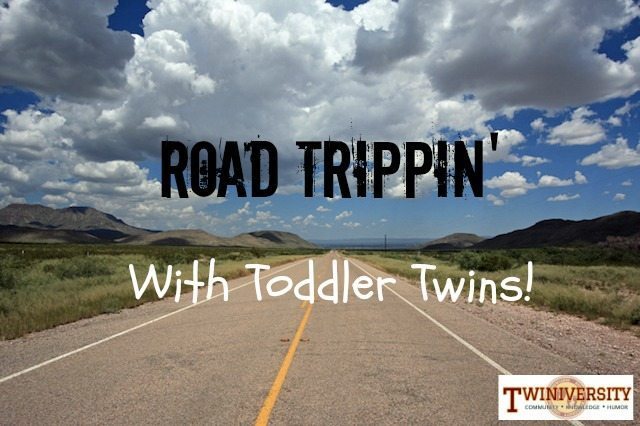 This Fall, my husband and I took our 2 year old twins on a 10 hour road trip to visit family. As we planned, we frequently asked ourselves if we were crazy. A few weeks before our trip I began to panic and asked all of my mom groups and Facebook friends for tips for the drive.

I spent a few days preparing, and I have to say our trips both ways were incredibly successful and almost – dare I say it – fun! On the way there we were blessed with glorious weather and no traffic. On the way back we had pouring rain and sat in traffic for over an hour right at the beginning of the drive. Despite the delay, we had almost no crying and the time passed pretty quickly. We were so successful, I had to share the tips I followed with all of my friends 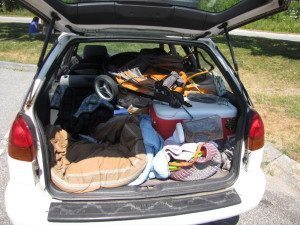 First, we were completely packed the night before. Not only did we pack all of our clothes and essentials in the car, but I made meals for our family to eat on the road. I did not want to rely on finding a rest stop with toddler-friendly food. For us that meant cold quesadillas and chopped vegetables for lunch, and deli for dinner. And lots of juice boxes! For some reason my kids do not want to drink water in the car, but juice is a special treat, so it kept them hydrated.

The morning before we left, I had the kids take their little backpacks and pick out books and toys to bring on the trip. I had been talking about this trip for over a week, so it was not a surprise. “We are going on a very long trip today, we will be in the car all day! Pick out some books and toys to bring!” They were excited to “pack” their own bags. Then, when we were in the car, I encouraged them to dig through their bags for the first two hours.

I learned one important lesson on the way there that was helpful for the entire trip: the kids had a 2 hour limit on being in the car. Even a short stop to change diapers and jump up and down would make a huge difference in family morale. We learned that our stops were a minimum 30 minutes, including all the time to unload and reload, so we built that into our time table: every two hours, we stopped for 30 minutes. And at the end of every stop, I promised a “surprise” when we were all buckled and ready to go. The kids were excited about their surprises and were as cooperative as they could be about getting back in the car, considering. 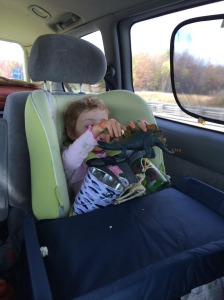 The surprises were simple. I tried to encourage imagination and pretend play as much as possible. One time it was small metal buckets from the craft store and some Mardi Gras beads – this lasted a surprisingly long time! One time it was spiral notebooks with Crayola ultra-clean markers tied to it, markers which were mostly used on their arms, faces, clothes, whatever and totally washed out later! And one time it was popcorn and two new plastic dinosaurs – who knew dinosaurs also got hungry on road trips?

The hardest stretch was in the middle of the drive, when we had been in the car for a while but still had a long way to go. I resisted the iPad because we still had far enough to go that I didn’t think we could make it just watching TV the rest of the way. At this point my strategy changed – I gave them something new every 20-30 minutes. I alternated snacks and toys or books. So, for example, they got some crackers, and then twenty minutes later they got a book of stickers. Even if they weren’t actively fussing, I just kept changing it up, keeping things fresh during this rough part of the trip. 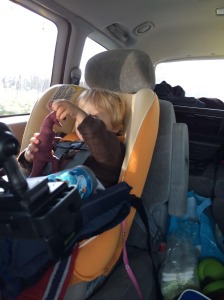 We also ate our meals in the car. I bought a snack tray that attached to their forward-facing seats, which worked out surprisingly well. I wasn’t sitting in the back with them so I wanted them to be able to feed themselves without dropping too much food. We also used this tray for drawing and other activities.

In the end, we only watched one episode of Sesame Street on the iPad, all the way at the end of the trip, after having been in the car for almost 9 hours. I was proud of them for making it so long, and with very minimal crying!

We thought we might be crazy, but honestly the experience was so much better than flying with two toddlers that we are planning to do it again in a few months. And maybe, one day when they’re older, we could split the drive into two days and actually stop for fun along the way!

Things I purchased for the trip 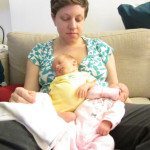 Robin Sheldon is an artist and therapist, currently staying at home full time with her toddler twins and two cats while her husband hunts and gathers. She recently moved from city to suburb and what a transition it has been!