Home » Our Day Out, or why it’s impossible to pop out with twins 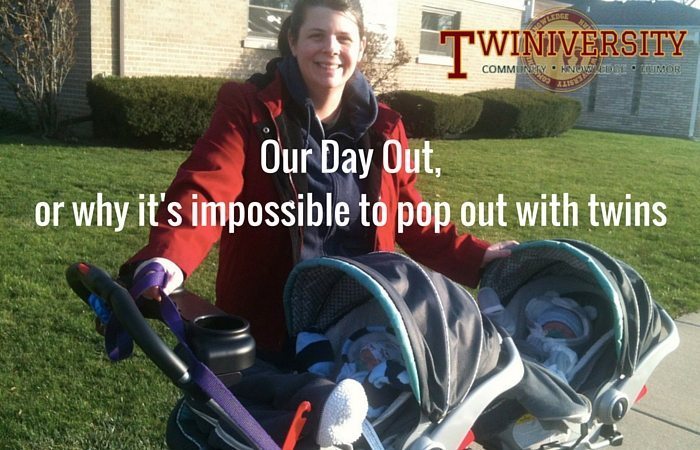 The following piece was originally featured on Sam Avery’s blog, a UK comedian and dad of twins and Twiniversity contributor.

We had our first full day out today. I used the word ‘full’ even though we were only out for less than an hour. It just took all day to get ready.

First thing to negotiate was the pram. If you know what you’re doing it’s a piece of cake. If you haven’t got a clue it’s a massive Rubik’s Cube you’re scared to break.

I loved Transformers as a kid but I’m permanently scarred from snapping Megatron’s leg off one Christmas with a hapless transform attempt. I spent the next few weeks trying to convince my mates that he was only supposed to have one leg but they didn’t buy it. And my parents wouldn’t buy me a new one so I ended up breaking the leg off my Mr. T figure and surgically connecting it to poor old Megatron with some chewed up Hubba Bubba. The results were less than satisfying and I don’t think Mr. T was too impressed with my Dr. Frankenstein style solution either.

So I was being very careful when pushing and pulling the various bits, trying to make them click into place. There’s so many accessories to the pram it’s difficult to know which is which and at times I felt like I was on The Cube trying to complete a task. At one point I had the carry cot clipped on sideways which made it look more like an incredibly middle class wheelbarrow.

I don’t want to give undue advertising to anyone so I won’t mention the brand name of the pram but let’s just say it rhymes with ‘Mugaboo Wonky’. We bought it second hand because we’re not on the Forbes list – these things are £1600 brand new. That’s a full day’s worth of nappies if you have twins. My first car only cost £700 although I suppose that old Ford Fiesta didn’t have a removable side-bag. 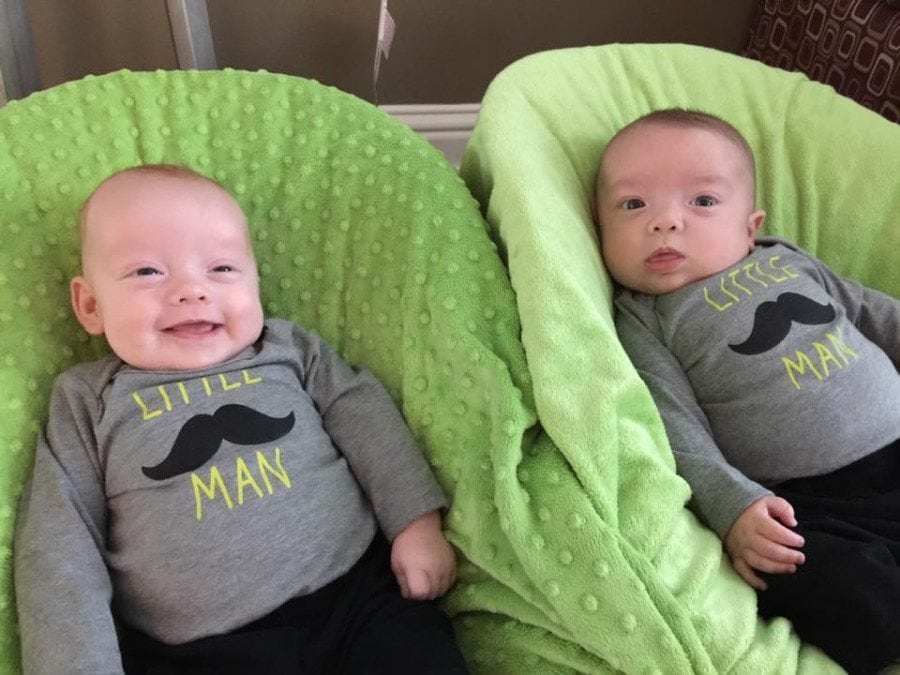 We fed both the lads, changed, and dressed them in their first ‘going out’ clothes. They looked really cute so I grabbed the camera just in time to see Ben puke all over himself. I picked him up to try to minimize the damage and he aimed his second wave perfectly down my t-shirt. I took Ben into the next room and through the doorway behind me heard Zac make a belch noise that sounded like a disgruntled frog watching his team lose. As burps go, this one sounded wetter than a Volvic staff trip to the swimming baths.

I dashed back in but Zac hadn’t actually puked. It had been that rarest and most beautiful of occurances – a clean burp. The excitement and misplaced pride took over my better judgement and I stooped down to kiss him on the cheek with a slightly patronizing well done, son. As my lips touched his cheeks he vomited with the force of an angry power shower. His timing was impeccable because he managed to coat me, Ben, and himself in almost equal amounts of his second-hand milk. It looked like Mr. Stay-Puft the Marshmallow Man had exploded in our living room.

Then he started to cry. As he inhaled between bawls he got a rogue piece of regurgitated milk wedged in his nostril which made him cry more. This made Ben cry too for some reason, I presume in a loyal act of brotherly empathy. I considered joining them for a split second before realizing I’m 36 and this is all part of the rich experience of parenthood. Anyway, where would the highs be without the lows? I can’t even begin to enjoy a picnic unless I’ve been first stung in the eyes by a wasp.

We changed them into new ‘going out’ outfits and got them in the pram. I felt a rumbling in Zac but didn’t know which way it was heading. It turned out the rumble didn’t know either and decided to go both – it was a classic Puke / Trump Dirty Double © It wasn’t comparable to the first phase but like an earthquake’s aftershock there was still considerable damage, mainly to their clothes and my emotional wellbeing. We changed them once again, this time into scruffy sleepsuits as there was no ‘going out’ clothes left that we wanted to instantly ruin.

Time to leave the house, finally! But the pram was too big for our front door so we had to dismantle the whole thing and reassemble outside. The day was slipping away from us like a bar of cheap soap in a camp site shower block, but at least we were outside now. 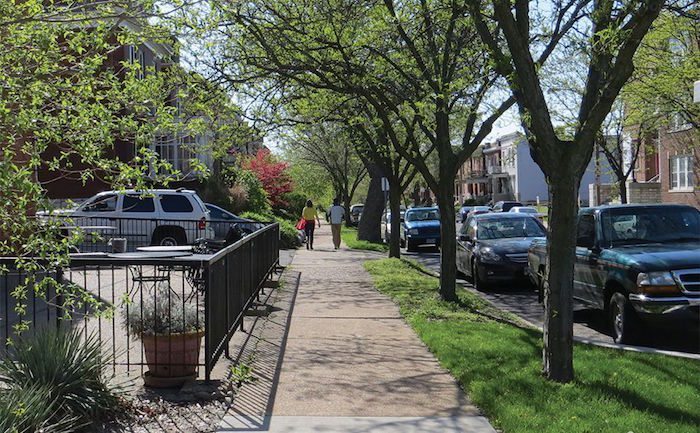 Walking down our street pushing our lads for the first time felt liberating. A neighbour stopped us and said they didn’t realise we’d had a baby. “We’ve had two!” we both chimed in sugary sweet unison.

I was suddenly very aware of every possible threat to my sons and my role as protector. I was swatting away flies and nearly swung a punch at this poor bee that buzzed through our periphery. Then there were the dogs.

I’m petrified of dogs or at least I used to be – I heard some loud, aggressive barking behind us and instead of me freezing up and a bit of wee coming out like normally happens, I simply slowly turned round to confront this wild beast. I could barely believe what I was doing but I stood my ground directly in between my family and this rabid monster. (Think when George McFly finally fronts up to Biff in Back To The Future.) I stared it right in the eye and mouthed the words don’t you even dare come a step closer until it gave up and trotted off. I can’t stand Jack Russells. 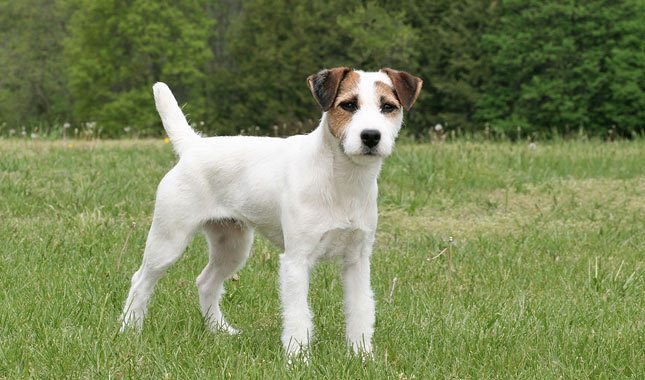 Crossing the road hasn’t felt like a challenge since I was eight but with this pram in front of me I was now playing a real life game of Frogger. I naively thought that all the traffic would stop when they saw a double pram trying to get across the road but they almost seemed to speed up, the bastards.

All our time in the park was spent being stopped by strangers who wanted to coo over the boys. It was lovely the first twelve times but then it did start to drag a bit.

“Ooooh, how much did they weigh?” (Women love asking that question about babies but get very offended when I ask them what their own stats are.)

And then it was time to come home.

On the way back we found ourselves in a Mexican stand-off with another pram on a thin piece of pavement. I was about to move backwards (complete with reverse noise beeping) but they quickly moved out of the way. I felt like the big truck in Stephen King’s Duel. I reckon I could throw my weight around with this pram.

When we got back home it was getting dark. We felt like we’d circumnavigated the Gobi desert.

We’d been out of the house for 47 minutes. 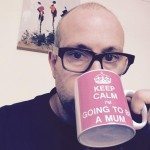 Sam Avery is a stand up comedian and twin dad from Liverpool, UK. In between gigs, nappy changes and panic attacks he blogs at Sam Avery Comedian and you can follow him on Facebook and Twitter.

How to get out the door with twins in 10 easy steps, or why I’m always sweating

Getting out of the house with twins