Home » Hybrid Feeding and How it Worked for my Twins 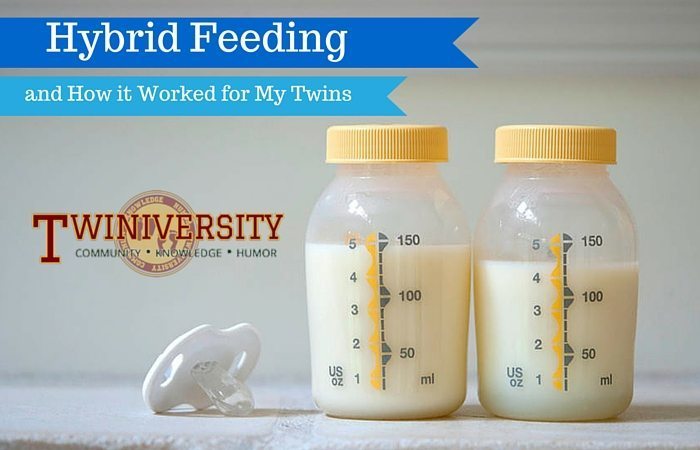 While the benefits of breastfeeding are well known these days, having more than one mouth to feed can make it more difficult to breastfeed exclusively. After nursing my singleton for a year I was sure I wanted to breastfeed my twins. I knew it would be healthier for all three of us, much cheaper, and would save me the trouble of washing all those bottles!

Things didn’t go according to plan. My twins had to be delivered at 34 weeks and most hospitals won’t let you breastfeed premature babies too much because it’s hard work for them. They have to bottle-feed until they get strong enough to nurse more. I worried about nipple confusion, but Andrew never had a problem transitioning from bottle to breast from day one. I started pumping right away so he only got a little formula the first few days until my milk supply really came in. We were back on the breastfeeding track as I had planned.

If premature babies are really having trouble eating they get an NG (nasogastric) tube to dump their food right into their stomach for them. They get all the calories they need, without having to do any of the work. Because of his congenital heart defect, Danny had to get all his food this way for a few weeks. Once he recovered enough to bottle-feed they discovered he was aspirating , so he came home with the NG tube still in and started speech therapy to teach him how to swallow properly with a bottle. I continued to pump so he could get breastmilk through the NG tube, but his bottles needed to be thickened. Apparently breastmilk will digest the thickening agents, so Danny could only have formula in his bottles. As much as I didn’t want him getting formula, I was happy to start working on bottles so we could get rid of the NG tube as soon as possible, so I got over my formula-aversion rather quickly. At least he still got breastmilk through the NG tube.

Because he wasn’t getting to nurse, I did worry about missing out on that bonding time with Danny, so I set up a schedule that allowed me to feed and bond with both of my little boys. I’m not going to lie to you: it was busy, it was stressful, and I seriously questioned if it was worth all the work. But for me, it was. Everything seemed so difficult at first, but once I established a routine that worked for my family it got easier and I was able to keep Danny on breastmilk. 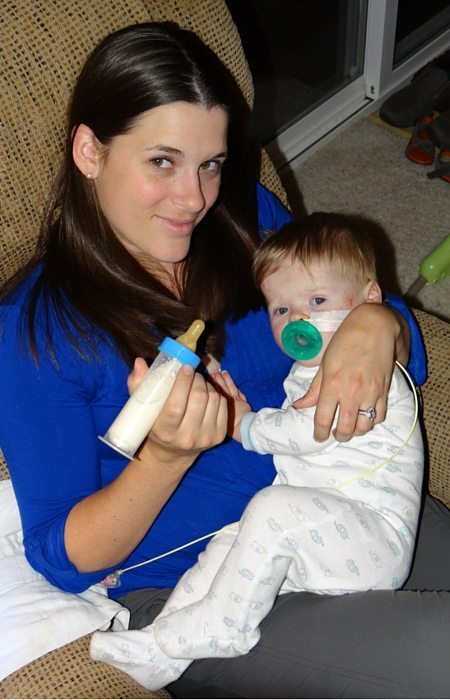 Here’s how I made it work

I didn’t want to starve Andrew while pumping for Danny, so I nursed him first. He generally fell asleep afterward, so while I love snuggling my children, I only allowed myself to indulge for a few minutes, then I put him in bed to sleep. Next, I’d bottle-feed Danny the little bit of formula he could handle before he became too tired, then gave him breastmilk in the NG tube while I rocked him to sleep, so he still got the same bonding time as Andrew. Again, only a few minutes, because then I had to put him down to pump. This was maybe 45 minutes after nursing Andrew so my milk supply hadn’t completely recovered, but it wasn’t so late that it would deprive Andrew of milk at his next feeding. This was the hardest time because I wanted to hold my babies, spend time with my toddler, or get something done around the house and initially it didn’t seem worth it because I didn’t get much milk. However, my milk supply gradually increased and I learned to multi-task while pumping. I ate lunch, read books to Nathaniel, folded laundry, read Twiniversity articles on my iPhone, or made phone calls.

Using this method, I was able to give Danny almost entirely breastmilk (except the formula he got in the bottles, of course) for the first 6 months and I had a good supply in the freezer. Then things got even more complicated when they turned 6 months old. Danny was found to have a milk protein allergy, so I decided to switch to a dairy-free diet and continued to pump. It made meal planning more difficult, he was in and out of the hospital quite a bit, and then Andrew started crawling and my pumping days came to an end. As committed as I was to breastfeeding for the health benefits (and because I’m ridiculously cheap) I just didn’t want to sacrifice playing with my boys in this new, fun stage to sit around with a breast pump. It was way less fun, and nowhere near as adorable as they were! I think every mom who breastfeeds eventually finds her breaking point with pumping and/or nursing and that was mine. I did continue to nurse Andrew, but I was ready to be rid of the pump. I felt guilty at first, but then I saw how much we all benefited from the extra time together and how much less stressed I felt and I knew I’d made the best decision for my family.

The whole “breast is best” campaign is important to educate expecting parents on the benefits of breastmilk, and I do highly recommend giving your kids breastmilk as much as possible. But what’s possible for one family may not be possible or what’s best for another. Some breastfeeding extremists (who somehow have enough spare time to kindle the fires of the Mommy Wars on social media) have even gone so far as to basically say that if you want or need to formula-feed, even just to supplement, your children will carry the psychological scars the rest of their lives. Well, Danny has a lot of scars but they are all physical, not psychological. He doesn’t appear to hold a grudge for being the only non-breastfed baby in our house and we have been able to bond in our own ways. And let’s face it – as his mom, I’m sure his future psychologist will blame me for all his problems one day any way. I may as well give them something to talk about! 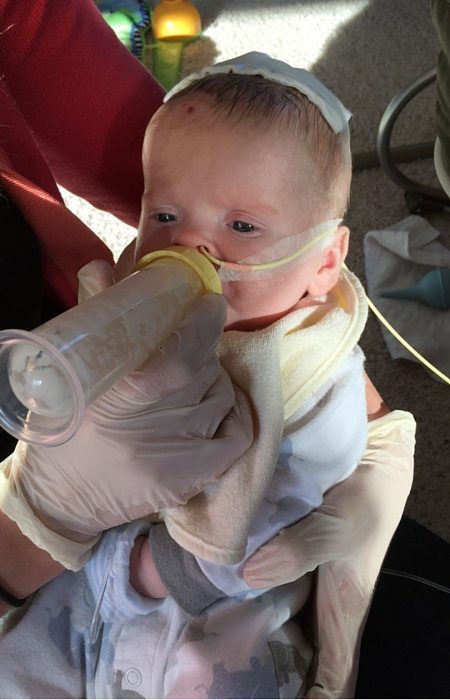 For those of you who are as hesitant to use formula as I was at first, here is something to ponder. Statistically, you probably already know some people who are formula-feeding survivors. Can you tell which of your friends or co-workers were formula-fed by looking at them? Are they shorter, weaker, or more sickly than the rest of us? Nope, and your kids won’t be either. Perhaps we should make them wear scarlet F’s to make it easier to identify them so we can continue to ridicule them like we do their poor mothers for failing to breastfeed exclusively. Make them easier targets for the breastfeeding Jihadists.

In an ideal world, I would have breastfed all 3 of my boys for a year and then let them self-wean. As it turned out, I had to try every feeding scenario possible, from exclusive breastmilk, to a combination of breastmilk and formula, to exclusive formula. I’ve breastfed, bottle-fed pumped breastmilk, bottle-fed formula, and fed breastmilk and formula via NG or G-tube (gastrostomy). And do you know what? They all worked. My kids are growing and gaining weight and as long as yours are too, you’re doing a great job. Breastmilk and formula are both perfectly acceptable means of providing your child nutrition. Yes, breastmilk is better in a lot of ways, but if you just can’t produce much milk, find pumping too time-consuming, or would just prefer to spend those 20 minutes sleeping, showering, or cuddling your babies, you can always feed them formula. It’s one of the great advantages of having kids in the 21st century; you have options. Don’t be afraid to use them.

I was devastated the first few times I had to supplement formula with my twins, but it made my life so much easier and it allowed me to pump and breastfeed for a much longer period of time, which I think is more important than exclusively breastfeeding for a shorter period. Find what works best for your family and go with it, whether it’s 100% breastmilk, 100% formula, or anything in between. Don’t stress, don’t look back, and don’t waste time on regrets. You have multiples. You don’t have time for it any way.

Diana Schneider lives near Ann Arbor, Michigan with her husband and three boys. She enjoys sleeping through the night, finishing sentences without interruption, stepping on floors that aren’t littered with building blocks, and eating dinners which are still warm, in silence. She hopes to do one of those things again some day. But she’s not holding her breath!

The Beginner’s Guide for Breastfeeding Twins

Wasn’t My Choice To Stop Breastfeeding