Home » What Should I Do About Jumping and Climbing on Furniture? 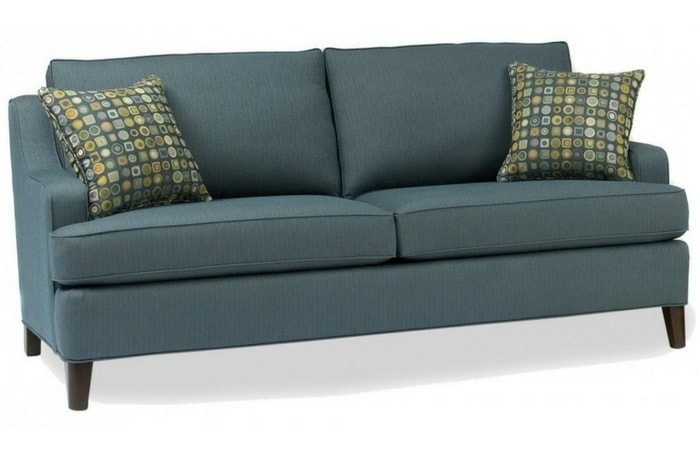 I’m a mom of 17-month old identical boys. They have been testing us a lot lately, most notably by climbing on furniture and jumping or walking around. They are doing it for attention and laugh or flash a mischievous grin when we try to scold them, but we’re terrified they’ll fall and hurt themselves. One of the boys has already fallen off the side, because it’s really difficult to be watching 100% of the time. Any ideas, or will this get old soon?

– My boys love to jump, bounce and act crazy. Best thing you can do is try to keep them from getting hurt. My kids had lots of accidents, luckily no serious injuries. I found that raising twin boys was more of a controlled chaos. Definitely a time to pick your battles wisely. Children must learn from natural consequences. One of my boys favorite past time was jumping and bouncing on my bed, or jumping off the corner of our sectional and bouncing on their butts. They survived and now are too big to do those things. ∼KS

– Create places they can climb. Then you just have to redirect to the appropriate climbing place rather than saying no. We have a climbing dome in our living room instead of furniture. Not very conducive to guests but helps teach them to move and use their bodies. Of course you’d probably want something smaller for younger kids.  ∼ALL

– I hate to break it to you but no it will NEVER get old for boys. My boy twins are almost 6 and they do wicked stuff everyday! Boys just seem to be wired that way. They run, jump, swing, play fight, wrestle ALL the time and seem to push the limits every chance they get. It’s exploration and it can hardly be contained.  My only advice is to set up an area that is safe so that they don’t go on the couch and beds, seeing as they are so high. Personally, I set up an indoor slide and small climb thingy even though we lived in a small apartment. It gave me the ability to do stuff around the house and to know that they were safe! ∼BR 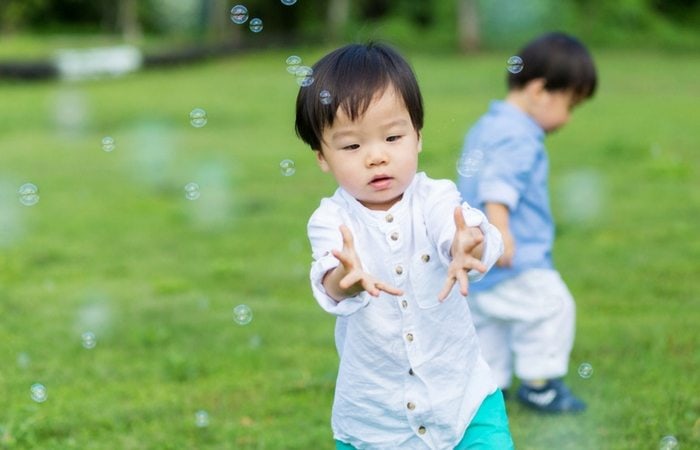 – Take them to the park to get their crazy out!  ∼TL

– I taught early preschool for years before my twins came along which helped a bunch. I worked to create a “yes” environment in my home. I put things up they could break, secured heavy furniture, and locked up dangerous items. It made it so I could relax a bit. That said, they WILL still hurt themselves so relax and enjoy the ride. Get a well stocked first aid kit and maybe take a first aid/CPR class so you know what to do when they hurt themselves. I’ve raised 3 boys and I can’t tell you how many trips to urgent care I’ve been to over the years even with all my precautions. They’re all still alive. ∼AD

– They are mastering a new skill and they are proud of themselves! At that age, we would flip over our dining room table chairs and tuck them under the table until meal times so that our boys couldn’t climb up on the table as that was pretty risky. For the couch, we put couch cushions and pillows on the floor next to it in case they fell (and they did!) but our couch was much closer to the ground so the falls weren’t as scary. They did master it rather quickly though so the super scary part passed quickly. We also tried to give them things to climb on and spent time down on the floor with them, encouraging them to climb and strengthen their skills. We had two big bean bag chairs and they loved climbing on a box and then falling into the bean bag chairs! Remember that while you have to be aware of safety, you also have to let them explore and test their limits. It’s how they learn and grow! ∼EP

– My twins are 18 months and I’ve learned that with two I need to pick my battles, I turn and the other is doing what they aren’t supposed to. So let’s just say I’ve relaxed a little with the twins than with their older siblings. When they get crazy we need to switch and go outside or to another room or get out a new toy and just use it as a distraction. Sometimes it works, sometimes it doesn’t. ∼EC

– My twins loved to jump on the couch at that age too. I was always scared that they would fall off of the back and break a leg/arm. We used to take all the cushions off and let them climb/jump on those. They loved it and I could ‘relax’ a little more.  ∼JF 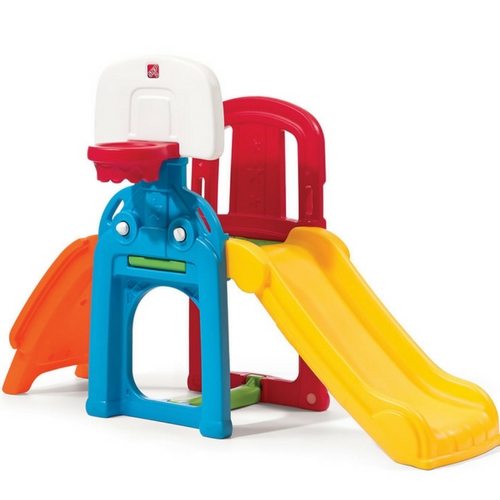 Twiniversity tip: The Step2 Game Time Sports Climber is a great toy for young toddlers to climb on safely.

– What a wonderful age. Designate a space they can do all of those things. Then repeat that we don’t climb on certain things in particular rooms with them. Get creative with space and set out challenging courses for them to practice with as much as possible. We had the rule, bums on seats (we don’t climb on sofa’s/chairs) pretty early on and it stuck – never 100% but I consider it a win – good luck!  ∼VR

– Mine are 2.5 and are also very VERY rambunctious. After a few bumps on the noggin and some guidance from us, they have learned to be a little bit more careful. They seem to be a little bit more aware of dangers, though they still take risks and still try new, dangerous things. It is what it is. We keep them absolutely as safe as possible, but things still happen and they learn and grow through it all.  ∼KW

– Mine are 18 months and my boy LOVES climbing on furniture. It has helped to provide him with things that are specifically for him to climb, a little slide or an activity table that is low to the ground. It also helped so much that we taught him how to get down safely. Once he climbs something, I flip him on to his tummy, feet down, and slide him down whatever he’s climbed. Now I can just say “get down safely please” and he usually does.  ∼LSB

– Kids jump and fall. They’ll get black eyes, scrapes, bruises, and sometimes they might even break bones. My best advice is just to put up all of the sharp stuff and take this all as a sign that they are perfectly healthy normal little boys.  ∼LM 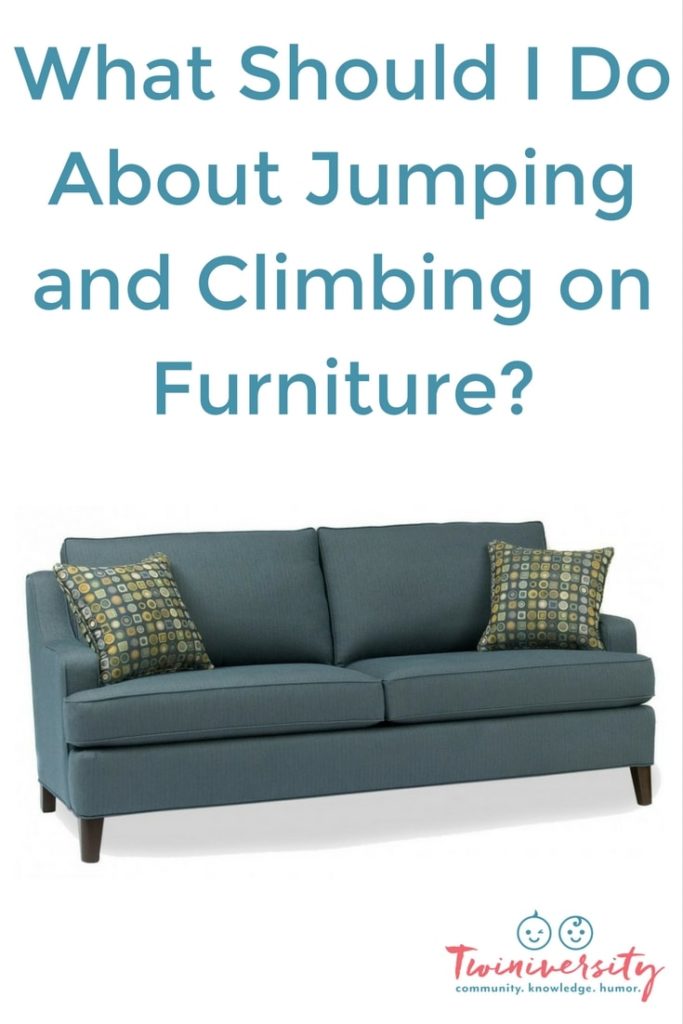 – I have never allowed my kids to jump on the couch and wrestling is not allowed inside the house either. They are 10 years old and they do not like playing with boys that are always rough-housing. Maybe it is just the way they were born but I also run a pretty tight ship! We have always spent a lot of time outside at the park so they can get their “beans” out there. Plus the fresh air tired them out.  ∼HA

– My boy/girl twins were climbing before they were walkers. The best I could do was teach them “feet first” and to climb down on their bellies.  ∼EF

– Climbing on furniture and jumping and walking around literally describes 80% of our waking day. Sure they fall but they are fine.  ∼AG

– Be firm and show no weakness!! They feed off weakness even at that age!  ∼KBR