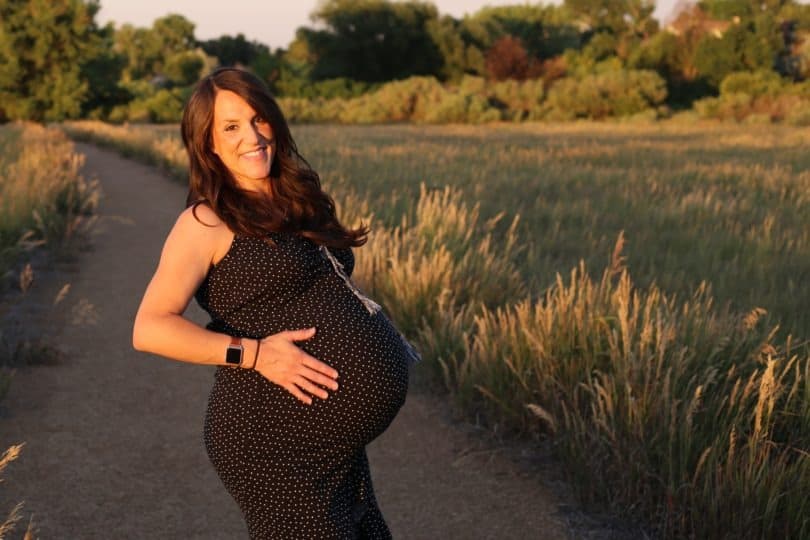 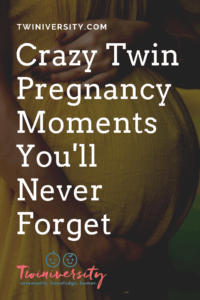 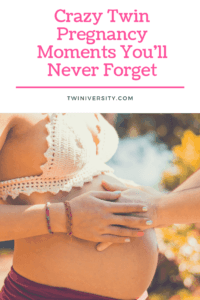 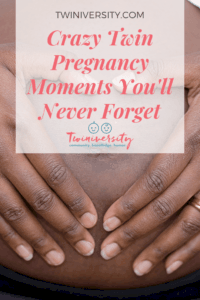 We asked our Twiniversity fans to share with us their craziest and most hilarious twin pregnancy moments, and they did not disappoint! Can you top these?

– I got into the backseat of my car to drive! I seriously thought someone stole the steering wheel. I was probably around 32 weeks pregnant with my twins at the time.

– We live WAY out in the country. We rarely have visitors and I had not ordered anything. I had just showered and dried off (no towel would have wrapped around me and dressing was an Olympic event at that point SO…) I heard what I THOUGHT was the dog at the door. It was the Fed Ex guy. Yep, I answered the door for the Fed Ex guy naked at 28 weeks pregnant with twins… Lesson learned. LOL!

– One night while pregnant with my twins I fell asleep before my husband. He decided he wanted ice cream. He came in the bedroom and began eating the ice cream VERY loudly. It woke me up and I got mad. I started yelling at him and then I started crying and he asked why I was crying and I said, “Because you didn't even ask me if I wanted any!”

– They let me eat very few things my entire pregnancy. Watermelon was a very welcomed safe choice. I got tired of cutting it up, so I just cut it in half and sat on my couch with a spoon!

– I, at about 36 weeks, was shopping with my older children and mother when I sneezed walking past the cosmetic department. Of course, I lost a small portion of the contents of my bladder. My family was laughing so hard and at that point I couldn't stop laughing so I lost the rest of it right there in the store. Thankfully I had on black, but my squeaky shoes were a dead giveaway.

– With my twins (I was about 30 weeks) one turned around and squished my lungs so bad I sat in the middle of the dog food aisle at Walmart and was trying to push him down while my husband (a first responder LOL) was yelling at me to stop hitting his baby! (I wasn't hitting him just trying to get more room for my lungs!)

– One of my favorite crazy twin pregnancy moments to tell people: I was on strict bed rest for 14 weeks during my pregnancy, and when I started getting bigger it was hard to even roll over or move around much. One night, our puppy jumped up on our futon, right next to my face, and passed the most horrendous smelling gas I'd ever smelled in my life…the kind that makes your eyes water! He wouldn't move, and I couldn't move, so I started yelling and laughing/crying until my husband came to save me!! You'd better believe I dog shamed him.

– I was talking to a group of college students. I referenced their grade in their “internet course” but accidentally said “intercourse grade”! Wow! Wrong thing to accidentally say to a bunch of 18-22 year olds! Pregnancy brain!!

– I baked four homemade pumpkin pies for Thanksgiving dinner and forgot the sugar!

– I had to climb out the passenger side of my car because I didn't fit out my door because I parked too close to the wall. I think I was about 32 weeks! Some might say why didn't you just move the car….I had a really sweet spot!

– Often while cooking I would put my recipe books in the freezer instead of on the bookshelf and then be pissed because I couldn't find them until I went in the freezer for something.

– I lived alone up in the mountains when I was pregnant. A friend asked me about cravings and I told her I didn't really have any. Another friend jumped into the conversation with “Wait a minute, didn't you tell me you went for Taco Bell a couple of times?” I said yes, but I didn't think it was relevant. She said something like “When you leave your house at 3 am for a 4-hour drive to get Taco Bell, I would say it's a craving. When you do it more than once, it's definitely relevant to your pregnancy”. Frankly, the thought hadn't even occurred to me until my friend had pointed that out!

– A common crazy twin pregnancy moments: Constantly holding my crotch like a toddler doing the pee pee dance because they were putting so much pressure on my pelvis. I must've been a sight!

– When I was getting a check-up at the hospital at 32 weeks I tried to scoot my body up on the bed and the bottom half collapsed and so did the sheet that was covering my nude bottom half. So when I pressed the nurse call button telling them what happened 4 nurses (1 of them male) rushed in only to find me half naked dangling and trying to not fall!! All the while my 10 yr old niece is there freaking out!!

– 33 weeks pregnant and was trying on nightgowns FOR the hospital when I passed out and got an ambulance ride TO the hospital. As the paramedics took me out via stretcher, I asked the store manager to please hold my stuff at customer service, LOL!

– I called my husband bawling my eyes out because I accidentally smudged my nail polish after a manicure. In my mind, the world had ended.

– My crazy twin pregnancy moments: I would drop everything. I broke at least 8 glasses during my 33 weeks of pregnancy. When babies came we had 4 glasses left in the cabinet.

– I used to pass out on the ultrasound table from all the weight on my veins! Crazy!

– I put the milk in the cereal cabinet instead of the fridge several times. I also always forgot about my boiling water for noodles on the stove.

– My husband came into the living room holding 2 different socks and said: “I don't think this is gonna work.” I had matched his big tube sock with my little ankle sock. I have no clue how I did that!

– I was 16 weeks pregnant and we were getting ready to leave for a week of vacation. About 35 miles down the road it occurred to me that I didn't shut the front door. So we drove back…. oh yea, wide open for someone to live for a week!!!!

10 Things Not to Say to a Woman Pregnant with Twins