Home » Food Allergies for Babies: Can It Be Prevented? 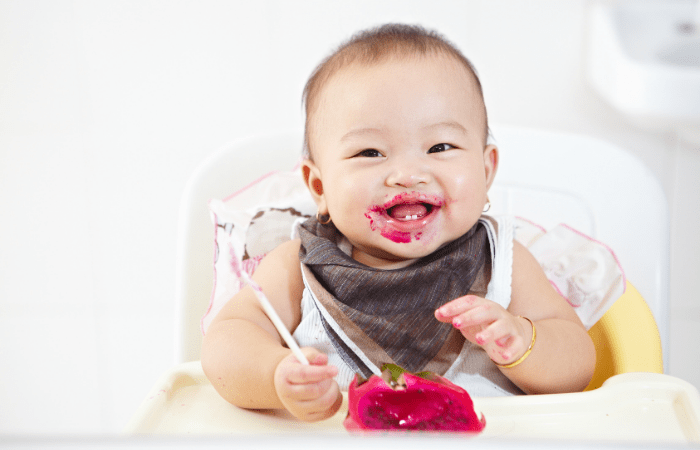 Learn about how to avoid food allergies for babies, including the importance of early allergen introduction, sponsored by Ready, Set, Food!

Ready, Set, Food! is a daily supplement that gently introduces your baby to peanut, egg, and milk, the three most common childhood food allergens. Studies have shown that this approach helps reduce the risk of developing allergies by up to 80%, and their system makes it easy. Simply add a packet of Ready, Set, Food! to your baby’s breast milk, formula, or food starting between 4-11 months of age, and continue for 6 months or until your baby is eating these foods regularly in their diet.

Food Allergies for Babies: Can It Be Prevented?

Are you worried that your babies could develop food allergies? We sat down with Dr. Katie Marks-Cogan, a board-certified pediatric and adult allergist and immunologist, to get some answers on food allergy prevention for babies. She is the owner of Clear Allergy which is a private practice in LA and she is also the co-creator and chief allergist at Ready, Set, Food!

How often do you see food allergies for babies or children?

Right now in the United States it’s estimated that about eight to ten percent of children have food allergies, which is a really high number. If you break it down, it’s actually one in 13 children. To break it down even further that’s like two kids every classroom have a food allergy. Those rates are actually rising. Over the past few decades peanut allergy has actually almost tripled so it has become an epidemic in our society.

5 Tips if your Child Has a Food Allergy

How do you know for sure if your child has a food allergy?

The child’s history is always the most important thing. I talk to the parents and really try to understand what happened and what foods were eaten. Then we can use some diagnostic methods like skin testing, which can be helpful, sometimes blood testing, sometimes both. I take all of that data, all those data points, and then make a decision on the likelihood of a real IgE mediated (which is a term we use for allergies) immediate type food reaction.

What’s the difference between a minor and major food allergy and how do you know when a reaction is serious?

The most common food allergy in childhood is milk and that’s followed by egg and then peanuts. But peanut reactions are also known to be the most severe. So children that have peanut allergy tend to have more severe reactions although any food allergen can cause a severe reaction called anaphylaxis, which is when more than two or more organ systems are involved.

The problem with food allergies is we can’t predict what the reaction will be. You can have a mild reaction one time and then you might have a much more severe reaction another time. This is one of the reasons why food allergies are so anxiety provoking for parents and for the patient themselves, because it’s hard to know what’s going to happen. The best thing, in terms of once you’re diagnosed, is avoidance: avoiding the allergen, and having your epipen with you. There’s also oral immunotherapy. Really we want to try to prevent them early to change the trend.

What are the new USDA guidelines for food allergies for babies?

What we used to say is to avoid allergenic foods. Back in 2000 when the American Academy of Pediatrics came out with guidelines advising parents to delay introducing allergenic foods such as peanuts, tree nuts, milk, and eggs. But then years later they reversed those guidelines because they knew that that actually wasn’t the way to prevent food allergies. And then since that time, we now have multiple studies that have shown us and have demonstrated that we can actually prevent up to 80% of childhood food allergies by introducing allergenic foods early and often.

Dealing with Food Allergies on Halloween

And so, because of all of that research, the American Academy of Pediatrics has put out guidelines recommending introducing allergenic foods like peanuts and eggs to babies starting at four months of age. This is the first year that the USDA is including guidelines for babies’ diets and one of their recommendations is also to introduce allergenic foods starting at four months of age. So now there’s a real consensus in the medical community around early allergen introduction.

What is Ready, Set, Food and how could this help a parent with food allergies for babies?

One of the co-founders, who is a physician himself, his son was diagnosed with multiple severe food allergies when he was an infant. He’s a really smart guy and he had been reading and knew about the studies on food allergy prevention. And he thought to himself, “Could I have prevented my son from developing this?” In terms of my involvement, I had been preaching early allergen introduction in my clinic to my patients and I knew how hard it was to do it, because when starting at four months a lot of babies aren’t eating solids yet.

So that’s the issue: How do you get allergens in at four months old if they’re not eating solids? So we got together and we got other medical experts involved and formed a team and created this product Ready, Set, Food! that contains the key allergens in childhood: milk, egg, and peanut. It’s able to dissolve into breast milk and formula in baby’s bottle, just one packet a day, and the doses are based on the clinical trials. We start with a small amount and then increase to a larger amount to make it gentle introduction. It’s also one food at a time.

When Your Child Has a Peanut Allergy

All you have to think about is putting one of these packets in a bottle once a day. All of the packets are numbered, and we tell you what’s in each packet, and you pour it into the bottle, it dissolves, and you give the baby the bottle. There are no additives or preservatives. We’re all parents and actually we all used it on our kids and, well, I’m slightly biased, but you know, it was so easy; it made my life so much easier not to have to think about those allergens.

It’s called “early allergen introduction”, but we should probably change the term to “early and sustained allergen introduction” because it’s not only about introducing the food. That’s really important for parents to understand, that just giving baby peanuts one day and then not continuing to feed them peanuts does not help prevent them from developing a peanut allergy. It has to be frequent exposure in the right amounts for many, many months. With Ready, Set, Food!, we wanted to make that part easy so it’s just one packet a day and you use it for six months or until your baby is regularly eating these foods in their diet so that you don’t have to stress about it.

Why should I introduce allergens in infancy?

Studies show that infancy is the safest time to be introducing allergenic foods. If an infant is going to have a reaction in all likelihood it is going to be mild. As they get older, the reactions can become more severe. In all of the the landmark clinical trials on early allergen introduction, there were no severe reactions, and in all of the data that we have in the United States and in the UK there have been no fatalities from food allergic reactions in babies. So we have a lot of information telling us that this is actually quite safe to do. The guidelines are recommending it to all babies.

What about tree nuts and other foods that can cause allergic reactions?

In the US, there are eight major food allergens:

Sesame has become an emerging concern and there’s a petition out now to add it as the ninth major food allergen in the US. So sesame allergy is actually becoming more common. Peanut is a legume, so it’s not actually a nut, and then there are the tree nuts that are considered the true nuts, such as cashew, pistachio, walnut, pecan, almond. They’re not as common in young children as egg, milk, and peanuts.  In terms of tree nuts, we’re actually coming out with a product soon that’s going to help with these other allergens, getting those into the diet, because we wanted to make that easy too. I tell all my families that they’ve got to get all of these allergens in. Shellfish, not so much — it’s more of an adult onset allergy and also it’s not prevalent in a lot of diets so I don’t always focus on that but the other ones are important.

If my child already has a milk sensitivity, is it possible to start introducing Ready, Set, Food! before four months old?

A milk sensitivity is very different from an allergy to milk. Many babies have something called — it’s a long name — but it’s called “milk protein induced allergic proctocolitis”. That’s the term when there is blood and mucus in their poop and oftentimes it can be from cow’s milk. And so a lot of people use that term “milk sensitivity” or “milk intolerance” and that’s very different from having an allergy. If a baby is diagnosed with an immediate type food allergy to milk then they need to avoid this product and they need to avoid all cow’s milk. But if they have a milk sensitivity because they had some blood or mucus in their stool or they had colic, sometimes the pediatrician tells mom to either remove milk from her diet, if she’s breastfeeding, or switch formulas away from a cow’s milk formula. And if that’s the case you work with the pediatrician to come up with a time that you can reintroduce cow’s milk because most of those babies outgrow that by one year of age.

A lot of times we reintroduce cow’s milk formula at eight months or ten months. So with Ready, Set, Food!, a lot of the time I tell parents to try it and see what happens. If the colic comes back or if you see blood or mucus in the stool then you can stop it. We actually have a Ready, Set, Food! that is dairy free so there’s no milk and it’s for this reason; it’s for these babies so that the parents can still get egg and peanut into their diet and wait a little while to reintroduce that cow’s milk.

Do you have more questions about food allergies for babies? Visit Ready Set Food to learn more.