Home » A Broken Down Delivery Day 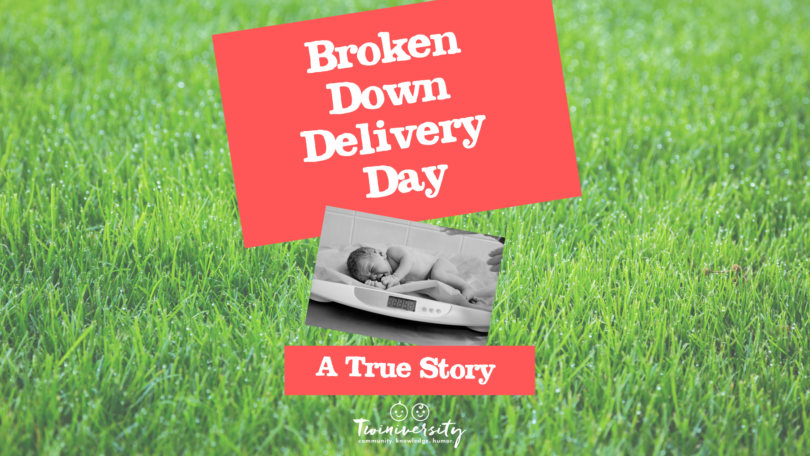 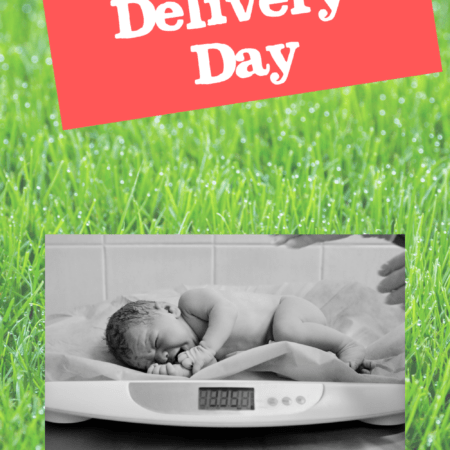 Ever had one of those weeks? Well, that was me the week my twins were born. We had the good, the bad, the downright scary, and the blessed moments all wrapped together in one birth story. Everything we planned on going crazy worked out and other things just went haywire. (Just a few notes before I start: I work for a small trucking company, my husband works with me, and my twins were born at 38+ weeks.)

It started the week before my twins were delivered by C-section. We had a fairly good pregnancy to this point. The Tuesday prior I went in for blood work in the morning and as I was returning to my office they called to say they missed a lab — not the first time. I decided we would go back after work since the lab was open until 7:00 pm. When we returned, we had a long wait. Apparently, since I have a strange blood disorder, my doctor requested an unusual test and no one knew what the test was. Finally, I had the last blood drawn and we left around 9:00 pm for our hour drive home.

I had an appointment for monitoring the following morning and after dropping my husband off at work I headed off to the appointment (which was not our norm — he normally went to all the appointments). My blood pressure was slightly elevated and they wanted me to go to the Labor & Delivery (L&D) department for a consult. So I became stressed, called my husband, which put him in a situation since I drove the car.

As I put the car in reverse to go next door to the hospital, the car did not want to go into reverse. Argh!!!! Finally, it banged into reverse and I decided to park in a spot where I could drive forward out of the hospital. I get the all clear at the hospital but they told me I should come in Saturday morning for monitoring because I was having major contractions of which I had not felt one. (We found out later one of my twins was pinching a nerve which prevented me from feeling all but one contraction. Lucky me!) So we limped our little car the hour drive home and as soon as we made it to the driveway the transmission completely failed.

“We are going to be ok, we still have our other car,” was our thought at the time. Saturday morning we cleaned the other car out and installed the car seats, which made for a tight fit but it worked. Our friends stopped by to see if we needed anything. Thank God I had their phone number because as we got on to the main road heading to the hospital, you guessed it, the transmission on the other car went out. “This is not possible, this cannot be happening!” I said. We got the car onto a side street and I asked the owner of the house where we parked it if we could leave the car there. Now remember I am fully pregnant at this point, but the man informs me we can’t leave it there very long! Seriously??

So I called our friends. They came and took us to my sister-in-law’s house to borrow their car to go to the hospital, but their car is not running much better. In desperation, I call my boss who says we can borrow the company’s new crew truck until our car gets fixed. I called the L&D department to say I would be about four hours late and got a ray of sunshine when I realized the nurse was one of my dear friends. She says no worries, just get here safely when you can. When we got to the hospital she said normally they take blood pressure first, but in my case she was scared to. LOL! We chatted a bit and completed all my pre-admission paperwork. She let me lay on my left side to help lower my blood pressure. Finally, the moment of truth and it was the best reading to date. Who knew stress lowers my blood pressure??

I would love to say I spent Sunday relaxing before the C-section on Monday, but we couldn’t get our abandoned truck to start — go figure — so I asked another friend if he minded coming over to get our trailer to pick up my car off the side of the road before the homeowner had it towed. Thankfully, he came over but said there was no way he was letting me come to help, so off my husband and our friend went to get my car. When they came back I realized my husband was still sitting in the car — on the trailer! He had to ride in the broke-down car behind the trailer because our trailer was too narrow to allow the door to open. It was the funniest sight and he said he waved at everyone as they came back to our house.

We had a pretty restless night but it was now “D” day and we were on our way to the hospital in a huge four door pickup truck that barely fit in the hospital parking lot. We got checked in and everything was looking good. We went over the final concerns, latex allergy…check, medication allergies…check, six bags of platelets…check… The doctor was still concerned she would have to make a vertical incision because the babies were breech and laying diagonally. As she was doing the ultrasound my son moved … that’s it! The position she needed, and we were off to the OR. They had to be quick since I had issues with general anesthesia and I was not a candidate for an epidural.

Next thing I remember was seeing my good friend, who was my nurse again today, and my husband. They started telling me, my son was born first followed by my daughter. Both were well over five pounds, he was twenty inches and she was nineteen … wait, why was I itching and burning? My friend looks at my chest and there is a rash climbing my chest. “Laura?! I can’t breathe!” I heard her call a code.

At this point things get a little fuzzy for me, I remember the room filled with doctors. Someone asked, “Why does she have her wedding band still on?!” but I couldn’t respond. A few minutes later I realized I had a nebulizer on my face — the morphine machine was missing before I even had my first dose. They explained they were not sure what I reacted to so they took all medications away except Benadryl and Tylenol. Which I can say does not do much for you after a C-section. I had two more anaphylactic attacks and I requested the catheter be removed. After that I had no other issues.

As I was recovering, I was just happy my babies were healthy and that I was alive and improving. We all went home three days later. Although we never learned what happened with my bad reaction, and it was an adventure to get them here, I look at my two blessings each day I realize they were totally worth it!! (And yes the babies, us, and thirteen huge balloons went home in a crew truck!)

Carolyn Christensen is a working mom of toddler twins and a dedicated wife of 12 years.  After serving eight years in the Army Reserve she became the office manager to a small construction firm where she is blessed to work with her husband and bring her twins each day.