Home » A Twins Delivery That Turned Out Just Fine 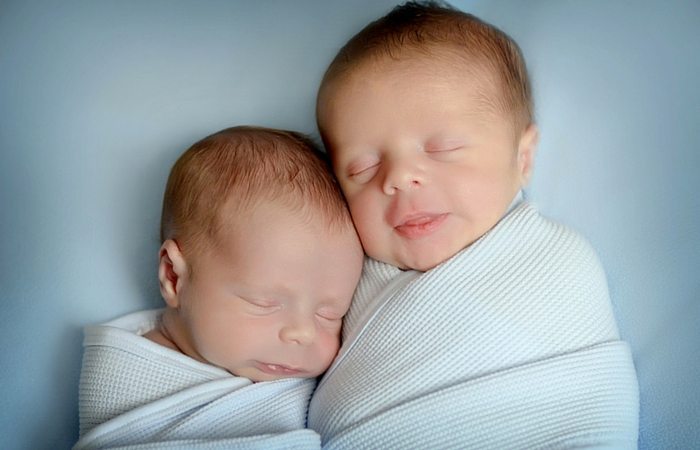 Once upon a time, I was (at least what I considered to be) a “normal” mom. I was average height, average weight, with brown hair and brown eyes. I was married to my high school sweetheart. We were raising our toddler son in a house, on a hill, in the cozy Midwest town we grew up in. But things were about to become extra-ordinary.

My second pregnancy was going according to plan. My first OB appointment was scheduled. I was feeling tired and nauseated. Several of my husband’s co-workers are twin moms. They had a lot of fun convincing him that we were expecting twins. They had him pretty freaked out about it one day and the next morning, he cracked an egg into the skillet for breakfast and saw it had two yolks! He was convinced this was a sign. I was convinced that my husband was coming unhinged. Who believes in egg signs?

Well, you can see where this is going. The joke was on me, because a few weeks later at that OB appointment the midwife decided I should have an early ultrasound. There were no words the moment that sonogram showed me not one, but TWO babies. You’ve all been there, so I don’t need to tell you. My eyes saw it for several minutes before my brain could really begin to comprehend it. It was wonderful and exhilarating, but at the same time confusing and terrifying. Part of my mind was reeling uncontrollably, bouncing from one random, frantic thought to another while the other half was just numb. TWINS.

How? Why? But…HOW? After a few minutes in stunned silence the sonographer commented that I seemed to be dealing with it very well and asked what I was thinking. Still numb from the shock, I said the first thought that came to my mind, “I think it’s a cruel irony that pregnant women can’t drink.” He laughed, but I wasn’t trying to be funny. A glass of wine would have done wonders to calm my nerves at that point. As it was, I had to settle for a very sobering genetics review from the physician explaining how I ended up being blessed with identical twins, which she described as a freak genetic occurrence. I left staring in amazement at the pictures of my little genetic freaks, trying to wrap my mind around this new, bizarre idea. I was going to be a mom of twins. That was not something I had anticipated in my ordinary life.

Dropping the “Twin Bomb” on my husband, friends, and family was one of the most entertaining things I’ve ever done. From my husband’s speechless (for once!) wide-eyed gape, to my sisters’ screaming, I had fun with it. My mom looked at the ultrasound photo and couldn’t believe how much better the quality of the photos is now, but this one looked funny, like there were two babies or something…you could see the wheels turning and then the moment the light bulb clicked on. My Dad was stuck in a meeting and insisted he couldn’t come over, so I just texted him the ultrasound picture. According to a friend who was also in the meeting, my Dad got the text and mid-sentence blurted out, “holy $#&%!” He was at my house 10 minutes later.

My co-workers ordered Chinese food for lunch a few days later and my fortune cookie was a little strange…there were two cookies in one package. My co-workers joked that it was a sign I was going to have twins, so I told them they were actually right! I’m not saying I believe in signs from the universe sent via eggs and fortune cookies but…you can’t make this stuff up.

If the first ultrasound was a bomb, the second ultrasound was an atomic bomb. You’d think I would have been on my toes a little more after the first one, but this one blind-sided me even more. Baby B, or Danny as we like to call him now, had a congenital heart defect. As the doctors so eloquently phrased it again, identical twins are genetic freaks. And when one freaky genetic incident happens, the odds that another one will happen are much higher. If I thought I was stressed and in dire need of a glass of wine eleven weeks ago, I was in big trouble now. My normal little world was getting knocked off its axis.

After a scare at 29 weeks when their blood pressures started elevating, I managed to cook my boys for 5 more weeks. Due to the risk of complications, my OB wouldn’t let mono/di twins go past 36 weeks, so I was happy we made it to 34 weeks. I was concerned Danny’s heart wouldn’t be able to handle the strain of labor and delivery and considered doing a C-section, but my OB believed there was no risk to his heart and going through the birthing process would actually be good for him, particularly to help clear out his lungs. After being hospitalized two times, I was sick of the incessant double beeping of the boys’ heart monitors and I was ready to meet my little guys.

We induced labor Sunday night, I got my epidural, and by Monday afternoon I was greeting Andrew in a big operating room suite in front of 3 teams of doctors and nurses. I’ve seen smaller crowds at movie theaters on opening night. I held him for a few precious minutes before they whisked him away and I got ready to meet Danny. I’d always heard twins were born a few minutes apart, but Danny had other plans. My contractions slowed down, Danny turned sideways and seemed content to just chill in there a while. The cardiac team had been anxiously waiting to get him assessed and whisked away to PCTU (pediatric cardiothoracic intensive care unit), but after a little while everyone started relaxing and joking around a bit, telling me he was just enjoying having the extra elbow room now that his brother was out. It seemed oddly anti-climactic.

Suddenly, something changed. It was silent. No one was joking anymore and the tension was back in the room. It took me a few seconds to realize why. The constant beeping of Danny’s heart monitor was absent. That obnoxious noise that had plagued me for 5 weeks was gone, and it was the most terrifying experience I’d had up to that point in my life. I knew this was a possibility, which is why I was delivering in an operating room. I could see nurses behind me start shifting equipment around to get ready for an emergency C-section. The doctor raised a hand and told them he was going to try inserting a new monitor to be sure the first one hadn’t just fallen out. After the longest 10 seconds of my life, he had it in place and I heard the most glorious sound in the world again. The incessant beeping was back. Danny made his debut almost an hour and a half after his brother and I held him for a few minutes before they ran him off for testing.

I’ve never cared much about celebrating my birthday, but my boys’ birthdays mean so much to me. They mark the days I met them. The days I became a mom. The days full of anticipation, fear, and excitement. The days my life took an unexpected turn away from normal and veered toward amazing and yes, freaky. There were a lot of unpleasant things that happened on their birthdays, but that has faded with time. I mostly remember the joy of feeling my boys in my arms, of hearing their first cries and feeling their heartbeats. Those days mark the end of my pregnancies, and the beginning of my journeys with Nathaniel, Andrew, and Daniel. When I look in the mirror, I still see an ordinary mom. When I look at my boys, I feel extraordinary.