Home » Curbing the Mayhem :: When Twins Go from Cribs to Beds

“Our 21 month old girl twins are little monkeys climbing out of their cribs. We just switched to toddler beds…yikes! The girls love their new freedom, getting up, playing and running around the room. It’s turned naptime and bedtime into 2 hours of mayhem! What are tips and tricks for making this transition?”

– I sat in their room until they slept. Kept putting them back in bed without any expression on my face. Don’t talk to them either. There is a book about this method, “Healthy Sleep Habits, Happy Child”.

– The first month of “free range” nap time, I sat between their beds with a book (for me) and let them sit on their beds with a book (for them) and a regular turn the knob kitchen timer (one they could see and hear so they didn’t have to ask if quiet time was over) set for 1 hour letting them know that if they broke the “rules” time would be added. The deal was that they had to sit quietly on their beds and not interact with anyone. If they broke the rules, got up to go potty or anything else, I wouldn’t say a word but added 5 minutes. If they both fell asleep, I snuck out with the timer, set it off where they couldn’t hear and put it back between them (I’d lie if they asked and say it went off but they didn’t wake up so I let them sleep). The first day took like 3 hours with all the time added. The second day took less and by the end of the week, they sat there the whole time quietly (or as usual, got bored and fell asleep). The key is for you to not add any interaction except to place them back in bed or maybe occasionally shake your head “no”. Each time they “mess up” put 5 minutes on the timer. After about a month I just told them it was “quiet time” and they’d go to their beds. They did quiet time until 1st grade started. My daughter is 8 and will announce every now and then that she’s going to go have quiet time.

– Take out any toys that could entertain them. Make sure furniture is tethered to wall.

– We just switched literally last week and what worked for us was keeping the room completely dark. If there was any light at all they were playing. I tried all the suggestions and nothing worked. In fact they began to think it was a game. I taped cardboard to the windows hung a towel and closed the curtains. Voila! They can’t see to get out of their beds they stay in them and sleep. No night lights or toys.

– We went through this, too, and close to the same age (22 months for us). Honestly, not much helped apart from time passing and the novelty wearing off. We had to take pretty much everything but the beds out of their room, though, to avoid having to replace everything in its proper place after every naptime and bedtime.

– For nap time I separate the kiddos. My son stays in their room and I put my daughter in our bed. I lay with her for about 10 minutes to make sure she falls asleep and then quietly leave the room. It’s been working for 4 months for us.

– Ride it out! Honestly, bedtime was baaaaaad for a while after we switched. We’d shut the door and hope they eventually settled down. They skipped naps for a bit but if I sat on their floor and didn’t let them out of their beds they would fall asleep pretty easily. At bedtime the only reason we’d go back in was if they were climbing onto their furniture. Otherwise, we just let them play til they wore themselves out and went to sleep. And we got blackout curtains because its less fun to play in pitch black!

– We just went through this two weeks ago and finally over the weekend separated them into different rooms. Sleeping perfectly for naps and bed time. Seriously, life changing! I didn’t want to separate them but so glad I finally did!

– My boys were the same; wouldn’t nap at 23 months in their cots so what I did was catch them when they were tired and I would put them in their buggy and go for a walk and both went out cold in two minutes. I tried all of the above and none of that worked.

– I would sit in the corner of the room with the lights out. Every time they tried getting up I told them, “No, it’s night night time.” I would put them back in bed. I did that for about a week. It worked for us. Hopefully this advice will help you. 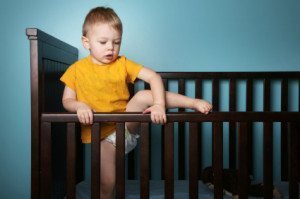 – I have 2 1/2 year old b/g twins and they will be staying in their cribs because I said so. If they even thought about climbing out they know they would be in trouble. So the same goes for toddler beds. They get up, they go to time out. Get up again I am swatting their butts. I don’t play around. And therefore I don’t have to deal with hours of bad children. 20 minutes tops. I hope you get the advice you need. But if you don’t actually get serious with them, nothing will change.

– 27 month b/g twins. Boy doesn’t crawl out YET. Girl has for a couple months. We converted her crib to a day bed and put a bed guard rail on. We have to lie on the floor next to her or she will crawl out. I think my life will be over once my boy can get out too. It would be great if the timer worked; I have my doubts for my two. Will have to pick a day to committing to hours of returning to bed. We currently don’t speak to her, put her back in bed, but she thinks it is a game and my son will too. Sleep time is definitely getting VERY stressful.

– The quickest way to get mine to bed was to chill out on the floor in their room and putting them back in their beds when they tried to escape. Only had to do it a few days and eventually they got the routine down.

– My 28 month old girls started climbing out of their cribs shortly before their 2nd b-day. We went and bought toddler beds, but then the climbing suddenly stopped. Around 26 mos, though, they started talking/playing in their cribs during the whole time they were supposed to be napping. After a difficult month (more for me than it was for them), we sent up a toddler bed in the playroom, and now they nap with no problem in separate rooms.

What worked for your toddler twins in the transition to “big kid” beds? Share your comments below!

Transitioning from Cribs to Beds

Transitioning to Toddler Beds – An Interview with Marc Weissbluth