Home » Do You Really Need Two Of Everything For Twins? 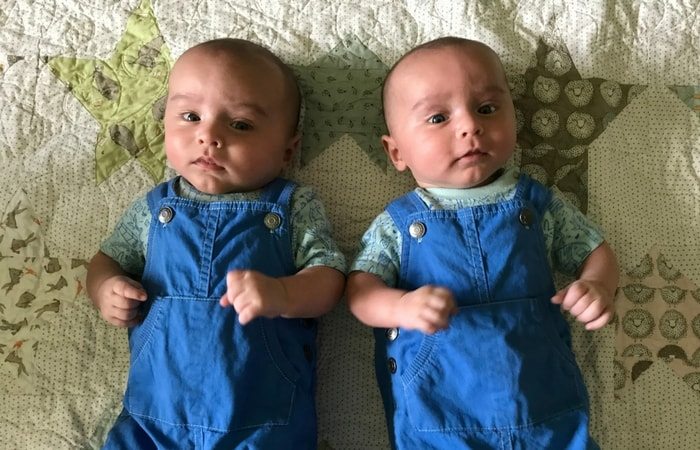 I remember laying down in the doctor’s office. It was supposed to be a routine first trimester exam, until the sonographer unexpectedly discovered two little heartbeats on the screen. The words she used to explain to me that our family was growing by two are still a bit hazy. But when the cloud of complete shock started to lift, a couple things came to mind.

The first two questions were easily answered. Yes, despite not having any twins in either of our families, we were indeed pregnant with identical twin girls, fulfilling a feeling (some might call it an obsession) I had ever since childhood. Parenting also teaches you a valuable lesson about time. You realize how precious it is and wonder what in world you did with all your time prior to having kids. Most moms learn to master time management, and your skills get more refined with each child. Having twins just accelerates the process.

The simple answer to question #3 is no. You don’t need to buy two of everything. You will learn, if you haven’t already, there are some areas where you should definitely double up. But most items you see at the baby stores are really just a matter of preference, for both you and baby. And you won’t know what works until after your babies are born. So, go ahead and put that cute, little lamb swing that rotates in every direction on your baby registry. You can even ask for two, just save the receipt. Because the odds of “Baby A” and “Baby B” agreeing it’s the best thing since sliced bread, are about the same as you agreeing to go bikini shopping shortly after childbirth.

While most newborn baby items are pretty much a game of “wait and see”, there are some times where buying two is the thing to do. Do yourself a favor, and stock up on these items before your twins arrive, or borrow extra from a friend and save some money.

Your babies need their own space. While it may save room and be cost-efficient, putting two babies in one crib is never a good idea. It’s simply not safe, and it will probably cause your twins to wake up more throughout the night. We bought two cribs for the nursery and we bought two bassinets for our master bedroom, so we could easily feed them and check on them throughout the night. My girls used the bassinets for less than six months, so the bassinets didn’t really provide much bang for their buck. But it did give us much-needed piece of mind.

This one is pretty obvious. You have twice the butts, so you need twice the diapers. But I would encourage you to do some research and determine if cloth or disposable diapers are right for you, even if you already made this decision with your older kids. Personally, I was never a big fan of cloth diapers, until I did the math and realized how many diapers we needed on a daily basis for our twins. The cost can definitely add up. On the other hand, the cost may be worth not having to wash and care for double the amount of cloth diapers. You need to figure out what works best for your family.

If you have two babies, you’ll need two car seats. I suggest infant car seats which allow you take the kids in and out of the car more seamlessly, and they work great with the double snap-n-go strollers. We used the infant car seat we originally bought for our first child, which was passed down to our second child. We liked it so much, when we found out we were having twins, we bought the exact same infant car seat from the store, so our girls would match. It can be expensive, but always buy your car seats new. You’re carrying precious cargo, so you need to need to know the history. It’s just not worth the risk. And be sure to buy them early, just in case your little ones choose to make their debut sooner than expected, as twins often do.

The way you feed your baby is a very personal choice. Similar to diapers, don’t assume what worked for your older children will work best with your twins. I had a difficult time breastfeeding my older kids, but I was able to breastfeed my twins for three years. Regardless of how you feed your newborns, you’ll need to have extra bottles (for breast milk or formula) ready to go. Get a starter box first and test them out. Be prepared for your twins to prefer different bottles. Also, consider how you’re going to position them during their feedings. You don’t have enough arms to cradle each baby and feed them with a bottle at the same time. I propped my twins up using a twin breastfeeding pillow, but you may want to purchase a couple infant support pillows or feed them in their infant car seats.

Be prepared for double the laundry because you’ll need twice as many clothes for your twins. Fortunately, newborns don’t really need much clothing, especially if you’re planning to do a lot of skin-to-skin contact. Having a couple sets of preemie clothing is probably a good idea since most twins arrive before their due date. If you don’t use them, they still work great for baby dolls! Since my girls are identical, we decided to buy clothes that matched. Yes, this was primarily for the cuteness factor, but having to choose just one outfit each day was one less thing I had to think about. To save some money on shopping, I highly recommend you find another set of twins about a year older than yours, and start a clothes swap. When your kids grow out of the clothes, pass them down to another twin family.

As your twins grow older and you get more experienced, you’ll probably discover more times where having two of the same item would have been a smart choice, but that’s nearly impossible to know in the beginning.

Instead, take baby steps. Stick to the basics and adjust accordingly. You got this.

Sunny Gault has been obsessed with twins since childhood. Despite having no family history, she told her mom she was going to have twins, and 25 years later she gave birth to identical girls. She is also a wife and proud mama of two older singleton boys. Sunny’s fascination with her own twins lead her to create the podcast Twin Talks, produced by her company, New Mommy Media.

Twins: One Gift or Two?

Organizing For Twins: Twice The Blessing Twice The Mess