Home » When Nothing Goes to Plan: My Double-Whammy Twin Birth 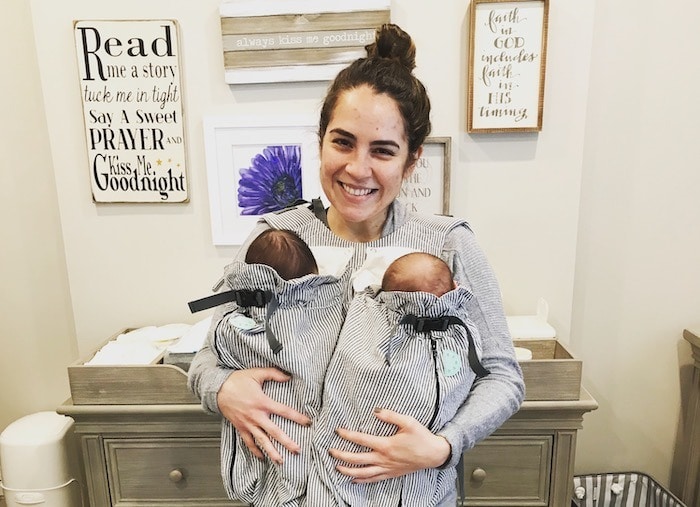 A mom of twins shares her story where nothing went right: infertility, bed rest, and a double-whammy twin birth. But she got her sweet twins in the end.

After undergoing a year of infertility treatments, including IVF, I thought a positive pregnancy test was going to be the answer to all of my problems. When I found out I was having twins, I was so excited to get two-for-one after trying to conceive for so long. Although I did experience all of the normal worries during my first trimester, I was never really concerned about how I would handle carrying twins or how I would give birth. Call me crazy, but I thought, “I’m young, in shape, and people have twins all the time, right? I’ll be fine.” As it turned out, I couldn’t have been more wrong.

Besides all-day nausea for the first 15 weeks, I had a pretty uneventful pregnancy at first. Once I hit 15 weeks and my morning sickness subsided, I naively thought I was out of the woods.

However, at 26 weeks and 6 days gestation, my cervix shortened and I went into pre-term labor for the first time, landing myself in the hospital and on bed rest for the remainder of my pregnancy. The amazing part is that after two pre-term labor scares, 25 total nights spent in the hospital, and mentally preparing myself for my babies to have a long NICU stay, I made it to full-term and delivered my twins at 37 weeks exactly. But how they came into the world and what happened after that is a whole other story.

Despite my rollercoaster pregnancy, one positive was that my twins were always in a head-down position, so I really wanted to try for a vaginal delivery. When I finally went into labor (for real this time) and arrived at the hospital, I was already 5 cm dilated. After receiving Pitocin to help my contractions along and an epidural, my labor progressed pretty quickly and within an hour I was almost 10 cm dilated and ready to start pushing.

As you may or may not know, twin deliveries are almost always done in the Operating Room, even if you are planning on having a vaginal birth. This is just in case you end up needing an emergency c-section (does anyone sense the foreshadowing here?) I hadn’t even been pushing for an hour when my doctor said he saw Baby A’s head, so I was wheeled over to the OR and after what felt like not very long, my daughter was born. I was officially a mom (cue the waterworks)!

At that point, I was convinced that I had gotten off easy. I had an incredibly effective epidural, my labor had moved fast, my daughter had been born vaginally, and she had paved the way for her brother to be right behind her, right? Wrong again.

After about another hour of pushing, Baby B was still not descending into the birth canal, and my doctor told me it wasn’t safe to keep pushing; he would have to perform an emergency c-section. I was disappointed because this had been my biggest fear in trying for a vaginal delivery, but I was also exhausted from pushing and just wanted my son to be safe in my arms.

To prep for the c-section I was given local anesthesia, and as a result, I became extremely drowsy and nauseous. I don’t really remember anything from the surgery except for vomiting pretty much the entire time.

I must have passed out, because I woke up in the recovery area about two hours later, without having met my babies yet, and found out that I had started hemorrhaging during the delivery and had received a blood transfusion. Talk about a scary thing to wake up to!

Still, I was going to be okay and my twins were born healthy, something I never thought I would be able to say after going into pre-term labor at not even 27 weeks. I was one of the lucky ones.

Now I’m not going to sugar coat it. After having both a vaginal birth and a c-section, my recovery was not a walk in the park. I found it hard to enjoy those first few days and even weeks with my twins because I was exhausted and in so much pain. Not only had I had a double-whammy twin birth, about 10 days after my delivery I experienced a postpartum hemorrhage, or excessive bleeding.

Being in the hospital for yet another night, this time without my babies, was the most terrifying thing I’ve ever experienced in my life and something I wouldn’t wish on anyone. As it turned out, the hemorrhage was due to my uterus not contracting back down to normal size. File that under: “Things you never knew you needed to worry about.”

After I got home from the hospital for what felt like the millionth time following my hemorrhaging scare, I remember thinking to myself, “Jeez, I’ve been through it all. What’s going to happen next?” It was very anxiety-provoking, especially during those first few weeks. But I have since realized that this was all part of my journey to becoming a mom to my twins.

For every “normal” pregnancy and delivery there is someone like me who went through infertility, had a high-risk pregnancy, or a complicated delivery. I know that I am not alone, and I share my story so that others know they aren’t alone, either. Everything I went through led me to my two greatest blessings and has made me a stronger and more resilient mother, and for that I would do it all over again.

Kristyn Hodgdon and her husband Dan live in Long Island, NY with their 2-year old boy/girl twins who were conceived via IVF. After struggling with infertility, Kristyn turned her pain into passion and Co-Founded Rescripted, a tech-enabled holistic care platform for fertility patients. Rescripted is changing the narrative around fertility and burning the word ‘normal’ when it comes to what a family is and how one comes to be. They’re rescripting fertility, together. Join the conversation on Instagram at @fertility.rescripted.