Home » A Consistent But Flexible Schedule for Newborn Twins 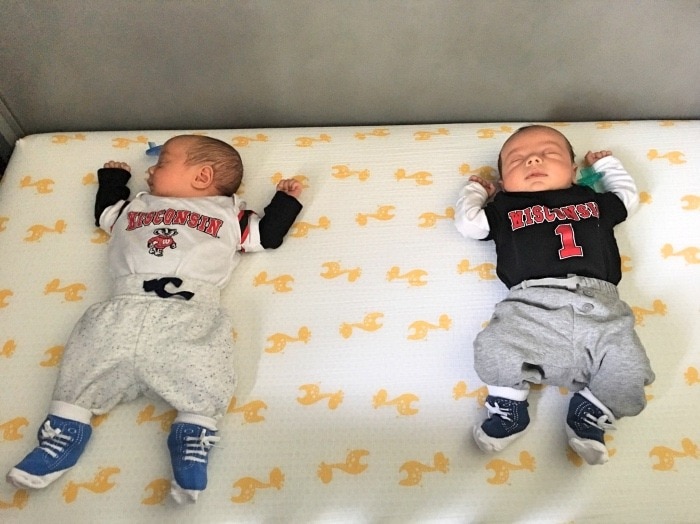 Being part of a relatively large multiples group on social media makes me very aware of the questions people ask over and over again. One of the main questions we see during the first year involves schedules and routines for feeding, sleeping, and “play”, or down time. Having two babies at once (or, frankly, any baby for that matter) can wreak havoc on any new parent’s daily routine. Eating, sleeping, and showering take a backseat to the feeding and sleep schedule of your new bundles of joy.

It’s hard to know when you should start feeding more, let them sleep more, or when you can take 5 minutes to stand in the bathroom alone. It’s even harder when you have temporary amnesia from the lack of sleep. Parenting does not come with a manual, but using the below methods saved our sanity when we were in the thick of it!

Disclaimer: As an Early Childhood educator, I firmly believe that parents must take the leadership role in our homes. The tricks below will simply provide you with the proper information to do so.

A Consistent But Flexible Schedule for Newborn Twins

When we left the hospital, they sent us home with clear instructions to feed our babies every 3 hours. This meant that 3 hours after starting the last feed we would be sitting down with our little guys to start the whole process over again. We knew that until our boys were back at their birth weight (they lost approximately 8% of their birth weight in the hospital, which is super common) we were to wake them throughout the night, no matter how well they were sleeping. All of this seemed to make so much sense. I would attempt to nurse, we were instructed to bottle feed as a supplement (our choice!), and from there I would pump for 15 minutes.

Leaving the hospital, these instructions seemed crystal clear. The first night home, however, was nothing like we had planned. After only an hour one of our babies was up and screaming. “Is he hungry? Overtired? Can a baby this small even be overtired?!” This was not part of the ‘plan’ they had discussed with us. What did we do wrong?!

After that first night, we made a plan. We would use our instincts (or what little instincts we had, since we had only been parents for about 5 days) and our boys’ signals to help determine what to do. Every-three-hour feedings sometimes became every two hours instead, realizing that we couldn’t do much harm as we tried to pack on the ounces. But we kept the boys together; we fed them together and slept them together. By our 2-week appointment, the boys had surpassed their 5lb 1 oz and 5lb 3 oz birthweights and we were allowed to stop waking them up on a schedule to eat.

As the boys got bigger and we got more comfortable in our routine, they would give us small hints when they needed to eat more. A bottle that used to take 30 minutes was now taking 10 or 15. They continued to search for the nipple after I thought they were done. They gave us the stink eye as if to say, “More, PRONTO!” There is no perfect long term feeding plan. You must be willing to pick up on the cues your kids are giving you and be flexible to accept the change.

I know I mentioned that we were allowed to let the boys sleep by two weeks old, but that doesn’t mean they were ready to sleep longer than a 2-3 hour stretch. When it came to sleep, my strategy was to make small goals. Most babies aren’t ready to be formally sleep trained until at least 4 months old. I wasn’t keen on the idea that we weren’t going to get a good stretch of sleep for 4 months and once again looked to my babies for behavior patterns.

It was very clear that, in our house, the first stretch of evening sleep was going to be the longest. We started a bedtime routine around 3 weeks old and aimed for 4 hours of sleep before feeding again. Soon that amount of time extended to 4.5 hours, then 5. I still remember being so excited when they slept for a 6-hour stretch. Again, nothing was set in stone and we let the boys dictate these new patterns, all with the blessing of our pediatrician.

Naps were no different. Around 1 month old, we had arrived at a pretty nice three (sometimes four) naps a day. The timing changed day to day. We could count on the first nap being the longest and the last nap being the shortest, with everything else up in the air. Sometimes one of these naps had to take place in the car because parent sanity occasionally takes priority. Instead of beating ourselves up that we couldn’t nail down the ‘right times’ to put the boys down, I realized that this is what worked for our family. We were on the type of schedule we needed. Consistent, but flexible.

I’m going to be extremely honest here for a second. When you bring twins home from the hospital, the “play” part of your day doesn’t usually take precedent. Eventually, we watched the boys’ lead and created our “eat-play-sleep” routine around their timing. Sometimes we had 15 minutes for tummy time and play. Other days we squeezed in a mere 3 minutes. Some days we played vivid rounds of peek-a-boo and others consisted of putting the boys on a play mat just so we could empty the dishwasher. Do what works for you and your kids at that point in time!

When all else fails

We had a motto. “When all else fails, let the babies tell us what they want.” We looked at everything as a routine and nothing had a formal time tied to it, but we always kept them together. One day they may need to eat every three hours and they next they could handle every four. Some mornings they napped for an hour and sometimes we got two (those were excellent mornings!) But on the rare occasion that we just couldn’t nail down our routine, we took an entire day and watched them. When did they show signs of hunger? When were they starting to yawn and rub their eyes? When were the moments of wide-awake excitement? Taking good notes during these “observation days” made the next month or so significantly easier.

With the boys’ help, we made it through that first year and as we approach birthday #2, these days are now simply a memory!

5 Tips to Stay Afloat In Your Twins’ First Year

How Much Help Will I Need with Twins?