Home » What if I Have Preeclampsia and HELLP Syndrome? 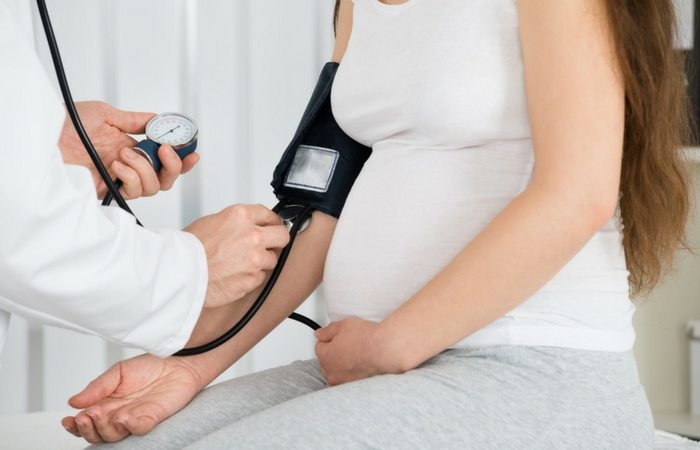 My twins were born on a Tuesday afternoon, when I was 34 weeks and one day pregnant. Delivering six weeks early was quite a shock — even though I knew it was more likely with a twin pregnancy — since everything had been fine at my weekly appointment only days before. Complications such as preeclampsia and HELLP syndrome weren’t even on my radar.

I was so confident that the pregnancy was progressing well and that I would make it at least another few weeks, that on the Thursday (at 33+ weeks) before delivery I went to a restaurant to watch the season opener football game for our beloved team. Okay, I’ll admit, it was really more of a bar/pub and I FREAKED people out when I walked in the door. I was consistently measuring around 10 weeks ahead and looked like I was literally about to “have a baby…in a bar!” I was amused at the reactions of everyone I encountered, but was confident that I had a ways to go before I met the babies since my doctor proclaimed that I had a “cervix of steel.”

Preeclampsia and HELLP Symptoms Can be Mistaken for Normal Pregnancy Symptoms

While watching the game I noticed some swelling in my legs and feet (my rings had long since been removed), but it wasn’t too abnormal for me at that stage and so I just propped them up on a chair and watched the game. The upcoming Monday was Labor Day, and our plans for the long weekend were low-key.

That Friday I began to have sharp pains under my ribcage, but I attributed it to kicks and wiggles from my son who had been relegated to the upper right part of my belly early on by his bossy sister. Throughout the weekend I felt a little “off,” but at almost 34 weeks with twins I didn’t expect to feel great.

Symptoms Can Come on Slowly With Preeclampsia and HELLP

On Monday we planned to grill out and have a couple of friends over to celebrate the holiday, but I ended up in the hospital instead. I had a nagging headache that was getting progressively worse throughout the day, but headaches are not uncommon for me, so I didn’t worry about it at the time.

My husband was on “make me eat” duty (it was harder than I thought to gorge like I needed to when the babies got bigger), but I just couldn’t stand the idea of eating anything and was quite nauseous for the first time since the first trimester. Then, I began to see floating black spots anytime I looked around the room and started to wonder if something was going on that I should be worried about.

Trust Your Instincts When it Comes to Preecplampsia and HELLP Syndrome

We needed something from the grocery store to complete the marinade for the pork loin we were planning to grill, and I told my husband that I was going to go ahead and get it. I intended to use the blood pressure machine (no clue why I thought to take my blood pressure at that time) at the store, just to make sure everything was okay, but I didn’t tell him because I didn’t want to worry him unnecessarily.

When I got to the grocery store I immediately went toward the pharmacy and the machine. The reading was high (160/90), and high blood pressure is one of the most common symptoms of preeclampsia. Not quite trusting the results, I went across the street to another grocery store that has an on-site walk-in clinic, but they were closed for Labor Day.

So, I went home and told my husband who demanded that we call the doctor. An on-call doctor returned my call and said that he couldn’t make a diagnosis over the phone and suggested that I go to the hospital.

We got in the car with no bag and dinner plans still intact, expecting that this would be the first of probably many trips to the hospital in the weeks before the actual delivery. By the time we arrived my blood pressure was even higher, and after what seemed like endless monitoring they decided to admit me.

I was still pretty clueless, but began to get concerned when they talked about needing to test the lung function of the babies (presumably to see how they would handle delivery). My husband asked if there was any chance that we would have to deliver, and we couldn’t get a straight answer since it seemed to be pending my doctor’s assessment the next morning. Through all of this, preeclampsia and hellp syndrome still hadn’t occurred to me as a possible diagnosis.

In the middle of the night we appealed to a nurse to give us her opinion, explaining that my family was eight hours away and needed a “heads-up” to make it in time for the delivery, and she said to tell them to come. That was pretty much all she would say, but it was clear that everyone thought we would be having the babies sooner than later.

The time after calling my family is kind of a blur. By that point, I was pumped full of Magnesium Sulfate, had set the room temperature to 50 degrees, and was begging for wet washcloths from my husband for my forehead, which I would then try to suck all of the water out of (I wasn’t allowed food or drinks, and the Magnesium makes you incredibly thirsty and very, very hot), before using it to cool off.

My sweet babies were delivered via c-section Tuesday afternoon, and I didn’t get to meet them until Thursday. I found out afterward that I was initially diagnosed with preeclampsia, and eventually HELLP Syndrome.

Even though, looking back, I had pretty typical symptoms of preeclampsia and HELLP, and I was relatively well read when it came to learning about “what to expect” and what could go wrong, I truly did not suspect that I had that serious of a complication. HELLP Syndrome can be devastating for baby(ies) and mother, and I now know firsthand how important it is to know the warning signs. I cannot even stand to imagine what could have happened if I hadn’t taken my blood pressure that afternoon and instead just thought that my ailments were a result of being in my third trimester with twins.

Give the Twiniversity podcast a listen!

Here are the primary signs and symptoms of preeclampsia and HELLP (the two often go hand-in-hand). Maybe reading this will inspire that random, back-of-the-mind thought that encourages someone else who needs it to check blood pressure, or make that “false alarm” hospital visit.

(Editor’s Note: Preeclampsia and HELLP are not the same and can come together or separately. You can have preeclampsia, preeclampsia with HELLP, or HELLP on its own. It’s important to know you can have HELLP while having completely normal blood pressure and protein.)

HELLP syndrome is a life-threatening pregnancy complication usually considered to be a variant of preeclampsia. HELLP Syndrome may seem at first like preeclampsia, as both conditions usually occur during the later stages of pregnancy and have very similar symptoms.

According to the Preeclampsia Foundation, the mortality rate of HELLP syndrome has been reported to be as high as 30%, and there is often no way of knowing if you are experiencing preeclampsia or HELLP. For that reason, you are urged not to try to self-diagnose!  If you have any of the symptoms listed above, please get it checked out. Among pregnant women in the United States, 5 to 8% develop preeclampsia. It’s estimated that 15% of those women will develop evidence of HELLP syndrome. This means as many as 48,000 women per year will develop HELLP syndrome in the US, but the number of HELLP cases can be lowered if preeclampsia is diagnosed and treated properly and quickly!

There is Treatment for Preeclampsia and HELLP

As I mentioned, I was on Magnesium Sulfate for two days after the babies were born, didn’t get to see them at all (other than on video), missed out on offering comfort in those first couple of NICU days, and was well and truly miserable on the magnesium, and all of that was HARD, really hard.

However, my best advice is to do what the doctor’s and nurses suggest and trust them to be the experts.  I wanted to be with my babies — I thought it was more important for them to hear my voice and feel my touch than for me to be laying in a hospital bed away from them, but I was wrong.  The best gift I could give them, at that time, was to get as healthy and capable as possible in preparation for the crazy first few months.

I was in the hospital for six days, and although it is different for everyone, by the end of the hospital stay most of the issues of HELLP had resolved for me.  Recovery, whether from HELLP or preeclampsia, from a C-section (in my case), or from the shock of what it is really like to bring two little babies home, is difficult. Don’t be afraid to ask family and friends for whatever you need, and don’t worry about asking someone NOT to come visit so you can get some sleep or get everyone on a schedule (true friends will understand). Above all else make sure you and your family are the top priority.