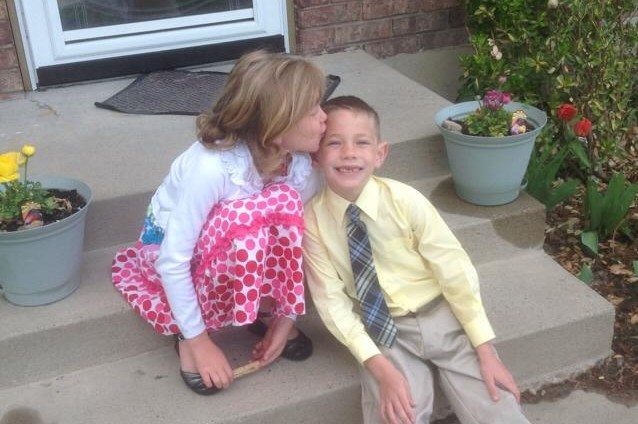 My twins are first graders(!) Before they entered Kindergarten last year, I agonized over whether it was good or bad that our school district has a policy to separate twins, and wondered if I should appeal (as is the procedure) to have them in the same classroom for just their first year. We were hesitant about separation because they were already going to be the youngest in the class and likely the smallest, and we thought it might help them to have each other.

Nevertheless, we also saw a lot of positives to letting them have some independence, and ultimately opted to keep them in separate classrooms. They ended up loving having their own friends and teachers (who were luckily the perfect “type” of teacher for their individual personalities), and were content to check-in with each other during their art, music and gym classes, which they did have together. 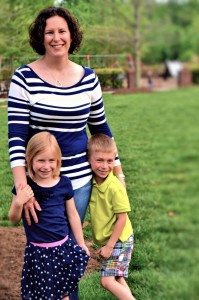 It was a whirlwind year, full of fun and surprises – for all of us. The kids certainly learned a lot, and I too, had a lot of learning to do as a first-time mom of school-age children. Yes, there are countless parents with two or more children in elementary school at the same time, but I can tell you that having multiples in separate Kindergarten classrooms presents some unique challenges that just aren’t the same when you have ones of different ages. Whether it is when they are on completely opposite sides of the stage at their very first performance, or when you mix up the homework pile and have to sheepishly ask the teacher who was assigned what, there will come a time when you realize that your Kindergarten experience as a twin parent is not quite the same as those with only one child at a time being ushered in to “real school.”

There were a few things that really stood out to me, when I reminisced about the year, that I would have loved to have known before the year began:

When you walk into the school on that very first day, as a parent, you experience a myriad of emotions. You are likely to be a little sad, a lot excited, and almost as nervous and scared as your kids. You want to be there to walk them in their classroom, to meet their teacher, to help them put their brand new backpack in their cubby, and to smile through threatening tears as you hug them goodbye and wish them a good day. They want that even more, both of them. On our first day my husband and I split duty, me taking one and him the other, and we arrived promptly at the start of the school day, as the bell was ringing and announcements began. My suggestion, with hindsight, is to arrive early! Give yourself a little more time to take each of your children to see where the other will be, to spend a little more time in each classroom, and to not feel like anyone was shortchanged on the big day (check out their crazy story here!)

There seem to be parties and celebrations for everything in Kindergarten, and parents are invited to most of them. If parents are invited, parents will be there, and if you aren’t, your child is likely to think you are the only one who is missing. My husband and I both work full-time, and simply can’t be at all the events. Talk to your children beforehand and explain that you will be absent. If you will be able to make it, really try to think about the logistics of being in both classrooms. If the parties are at the exact same time, have an interactive activity or performance, or will mean that your child is expecting you to sit by his or her side throughout, it is harder than you think to make it to both! With a little discussion beforehand, both of our kids were fine with whatever arrangements we could manage. 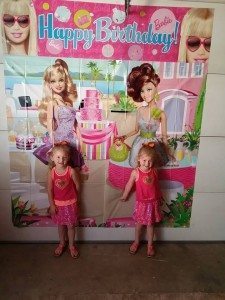 Parties are not just limited to the classroom, either. My kids each had 20+ other children in their rooms, and most celebrated a birthday sometime throughout the year. It is our school/teacher policy that if one child is given an invitation in the classroom, everyone must be invited. For twins in separate classrooms that means birthday celebrations with at least 40 children invited. While I would love to include everyone – that’s a lot of kids! My children have a summer birthday, so we skirt that issue somewhat – but it definitely warranted discussion well before the actual day, since I did learn that my two were concocting big plans for all of their friends! The other issue that arises, thanks to separate classrooms, is that it is very likely that one of your twins will be invited to a party for a classmate and the other won’t be included. For twins who are used to doing everything together, this can be upsetting. My best suggestion is to decide now, how you are going to handle it. We let the invited one go, and the other got a special day with the parent not attending the party. Some people ask the parent of the birthday child if the twin can attend as well. Some don’t go at all. Just know, that with separate classrooms and different friends, it will come up.

When you think of Kindergarten, you probably don’t immediately think of homework – but each week my two did have “home fun” to complete. A packet of worksheets, project descriptions, and activities were sent home each Monday in my kid’s classrooms and were to be returned on Friday. For the first part of the year my twins had basically the same assignments, with some variations in how they were tested on sight words, or how they were to present their projects. By the end of the year, though, they were still working on the same general material but the activities were completely different. 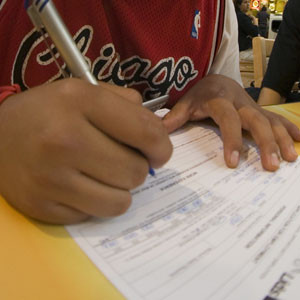 It became a requirement (after the wrong work was sent to both classrooms one too many times) that each Monday my children were to write their name on the top of each paper in the packet, and put the pages in their designated spot. We started out the year with them sitting at the table doing their homework at the same time. However, I found that they were “helping” each other just a little too much (they have complementary academic strengths), fighting over my attention when they needed help, and being really competitive about who knew what and who didn’t. So, we started separate homework times, and that worked great. I was able to give guidance when needed without feeling like I was being pulled in a million directions, the twins were better able to concentrate, and there was a lot more creativity in their answers once they weren’t hearing and seeing what they other said or had drawn.

Of course I knew that their teachers would not be exactly alike, but I didn’t expect my twins to have two teachers who were complete opposites. One had a very structured, somewhat strict, methodical teacher who liked to maintain a controlled and calm academic environment. She used a discipline chart and sent a behavior report home each day. The other had a teacher who was much more laid-back, a bit more nurturing, who thrived around the crazy, chaotic, silliness of kindergarteners. Her behavior report was the exact same for my child, every day – a smiley face. They were the perfect teachers for both of my kid’s personalities and were exactly what they each needed for their first year. 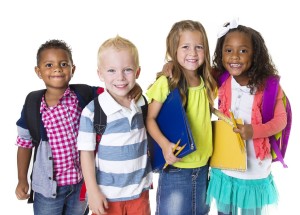 Their very different approaches did pose some twin parenting challenges, however. My son brought home a notebook filled with sight words, strategies to learn them, and a parent’s guide. He was tested each week on a specific list and I got regular feedback on how he was doing. My daughter had a big list of words she was expected to know by the end of the year, but she wasn’t given any real tasks to help benchmark her progress. When we created flashcards, as suggested, to help my son learn his words, it became obvious that my daughter knew them too. She was apparently (as we learned at the first parent/teacher conference) doing activities on the same words each day, acing her “tests,” and earned an award as the best reader in the class. If I hadn’t had my son’s experience to compare I would have been just fine with learning of how she was doing at the conference, but as it was I found myself upset that it seemed like she was not learning as much as him.

Even though I cursed the amount of homework often, I felt like my daughter was being slighted by not having as much extra work to do outside of the classroom. It took me a while to realize that the point is for them to learn and if that can be accomplished in the classroom so be it, and if it needs to be supplemented with “home fun,” – then that’s fine too, but there isn’t only one way that is effective. After that, I really tried to remind myself that it wasn’t fair to either teacher to judge them based on their peer when the academic results and my children’s happiness in school were the same. 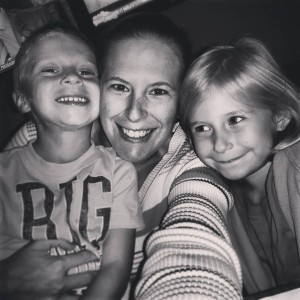 There are definitely some differences in the school experience when you have twins in separate classrooms. There are a lot of positives, too. When my children came home on the first day I had TWO excited little ones telling me all about their new friends, the big cafeteria, and the joy that is recess. When I went out to Field Day I felt like there were 40 kids to cheer on since I had the privilege of getting know two classrooms of awesome kindergarteners. And, when we went to the twins’ end of the year performance (where the teachers so sweetly put my children side by side to make picture taking so much easier), I was proud of my two for their accomplishments, for how much they have grown, and all they have learned and proud of all of us for making it through a great first year!

One Class or Two? The Question That Confounds Twin Parents

Shellie Fossick is “mom” to 5 year old boy/girl twins. She is also the Development Director for a non-profit organization that provides high quality early care and education for more than 400 low-income children in Middle Tennessee.  She lives in Nashville, TN with her husband and two children.