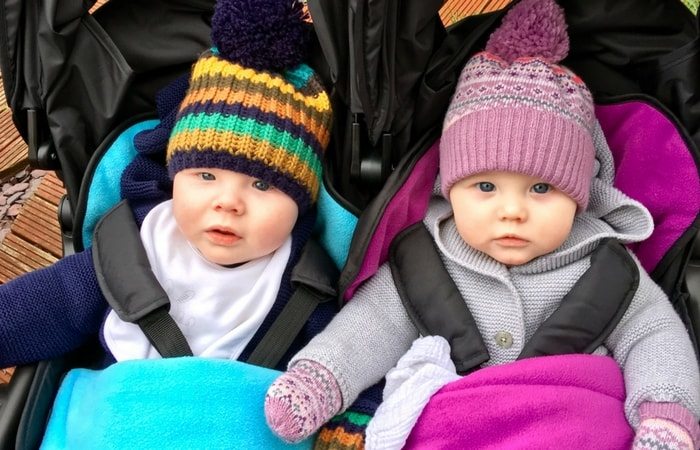 We recently asked “What’s the funniest thing anyone has ever said about your twins or having twins?”

– The funniest thing anyone ever said to me about my twins came from a little girl. She looked me dead in the face and asked why I was so special that I got 2 instead of just 1! ∼ LB

– I had a woman stop me in the aisle at Dollar Tree demanding to know why I dressed the other little boy in pink. I was confused at first, saying they were boy/girl twins. She told me I was mistaken, there’s no such thing as boy/girl twins and that I should be seen by a doctor for trying to turn the second boy into a girl. ∼ TR

– My four year old nephew thought I was having a two headed baby. ∼ AS

– I was asked if my twins had two different fathers because they don’t look alike.  ∼ NMC

– When our twins were just a few months old I had a cashier ask what made me decide to have twins. ∼ CBH

– There was a little boy in my twins’ preschool class that was amazed when it was their birthday.
Him: Is it really BOTH of their birthdays today?
Me: Yes, they are twins.
Him: No way! How can people share a birthday?! ∼ GAC

– “Twins? I tried 5 times for twins but only had one baby each time.” – older woman in Sam’s Club. She sounded disappointed. ∼ VM

– When one of my nieces saw my first set of identical twins for the first time she kept looking between the one in my arms and the one in my father’s before finally saying. “That baby is in two places at once!” ∼ CP

– My college roommate and I had twins on the same day. My older singleton son (3 years old at the time) thought babies came in sets of 2 and wanted to know where his twin went.  ∼ GAC

– Stranger in a store: Identical?
Me: They are actually fraternal
Stranger: Oh, so they’re not REAL twins.
Me: They sure felt like real twins.  ∼ KJP

– I have twins who were born over the span of midnight (89 minutes apart) so they have different birthdays. I have been asked more than once if they are still considered twins. ∼ LKM

– Stranger in a store: What beautiful girls. Are they twins?
Me: Yes.
Stranger: Their hair is different lengths, so they obviously aren’t identical. ∼ JB

– I had my then 5 month old twins in a stroller and a lady walked up to me and said “Aww, are they babies?” I said “Uh yeah, what else would they be?” She got offended. I’m still unsure of what another possible option was.  ∼ AEY

We really do wonder about people sometimes!

– My girls are completely different. One has blonde hair and blue eyes, the other is 5 lbs heavier with brown hair and brown eyes. A little girl (maybe 12) asked me if one of my twins were the mailman’s kid. Left me speechless. I can’t even fathom how she even knew what she was saying. ∼ JC

– I had my girls in frilly dresses and pink carriers and someone always asks me if one was a boy! So one time, I looked the lady in the eye and said “Why yes! My husband and I really wanted identical girls; so we have decided to dress our son like his sister!” It was one of those million question days and she caught me at a frustrated moment! ∼ AP

– I have very obvious fraternal boy/girl twins.
Neighbor: Are they identical?
Me: No, it’s a boy and a girl.
Neighbor: How do you tell them apart? ∼ LK

– When my boys were in the double stroller dressed the same, people would ask if they were twins. I would say no they’re triplets and I point to my stepson since who was 12 then. That comment always stopped more dumb questions. ∼ LK

– When I was pregnant with my boy/girl twins I had an older lady tell me, “Wow you are so brave to have twins!” I didn’t know I had a choice? Just taking care of the babies God gave me! ∼ PS

– My 6 year old step daughter asked me why I decided to have two babies instead of of just one. I had no idea how to answer the question. ∼ SD

– One time when we were in line at a store someone said “That must’ve been fun pushing out two?” I said I don’t know, I had a C-section. ∼ CJ

– The dumbest question I was asked was if when they grow up will they still be twins? It cracked me up. I guess you can never escape the dumb twin questions. ∼ KK

– My husband’s aunt asked me why one of my fraternal girls had more hair than the other. I told her because they are two different people. ∼ LHS

– A woman at the store said “Twins! My son wants twins so he’s getting a surrogate.” Wasn’t sure how to respond to that. ∼ EJR

– An old man stopped me to ask if my boy/girl twins were twins. I said yes. He then looked the babies up and down and told me no, my son was older. I said nope they’re twins. He said nope he’s too big. I said no, they’re twins. He then asked if they were two girls or two boys. I proceeded to say one boy and one girl. He looked at me like I was the devil and told me twins don’t come like that, only two boys or two girls. I said yes they do and one is a girl and one is a boy. He told me I was wrong, they’re not twins. While walking away angrily he muttered “twins don’t come like that”. ∼ KG

– “Oh, twins! What do you do with all your extra time?” I love sarcastic people, best comment ever. ∼ SDP

– An acquaintance argued with my husband about which baby was which. ∼ BD

– “Are they twins? Was it natural?” I answered with “No I got impregnated by an alien.” ∼ DG

– Stranger: I wish I had twins, I always wanted twins. ∼ MK

Best Comebacks and Responses to Silly Questions About Twins

Dealing With Strangers Touching Your Babies

Pardon Me, What Did You Say About My Children?