A mom of twins shares how her twin daughters do not have a magical twin bond, but have grown a sisterly bond after separating classrooms in kindergarten.

Twins. The mention often evokes the notion of two inseparable souls, deeply connected to one another, sharing a bond unlike any other. People imagine twins who can finish one another’s sentences, sense the other’s feelings, know each other’s thoughts, even feel physical pain when the other is injured.

At the very least, most people expect twins – of any type – to share a closer connection than those who are not.

I once found a ranking of the strength of twin bond by type, claiming the strongest bond exists between identical girls, while the second strongest is shared by fraternal girls, followed by identical boys, fraternal boys and, finally, girl/boy twins. This implies that all of these pairings share a stronger bond than non-twin siblings.

The belief is so prevalent, that one might feel like there is something amiss if their twins do not exhibit any such “magical” twin bond.

While I don’t deny that some twins absolutely share incredible connections with one another, I can confirm that it is not always the case.

My fraternal twin girls share no special, magical twin bond. They know they are twins but I don’t think they’ve ever even thought of themselves as being part of a pair.

In fact, for the first few years of their lives, I worried they wouldn’t even be friends. They were like oil and water when they were younger. They may be twins but they are complete opposites in personality.

Forget sensing each other’s feelings and being inseparable, my twins barely even got along with one another. I went so far as to put a saying up on the wall of their shared bedroom in hopes of instilling in them, “Because I have a sister, I always have a friend.” Of course, they couldn’t read, yet, so it made no difference.

It was clear that, in the case of my daughters, being fraternal twin sisters was not a guarantee for any special fondness in their relationship.

For years, one of my daughters was much closer with her brother (who is two years older) than she was with her twin sister.

Though the thought of twins may evoke expectations of some magical bond, the truth is – at least in the case of fraternal twins – they are no more alike than any other two siblings. My daughters are sisters who just happened to share a womb and be born within 11 minutes of each other. And though they have many more shared experiences than siblings of different ages, that won’t always strengthen their bond or make them the best of friends.

Actually, it wasn’t until my daughters had less shared experiences that they started to get along better.

From the womb through preschool, they had very few moments when they were not together. With their clashing personalities, this only served to increase the conflicts between them, not make them inseparable. So, when it was time for kindergarten, I was insistent that they be in separate classes.

I knew the best thing for my twins would be for them to get away from each other, to lessen the opportunities for comparison and competition and conflict, and to allow each of them to make their own friends.

I felt certain this would be best for each of them as individuals, what I never expected was that it would, in turn, improve their relationship with one another. It was almost immediate.

After the very first day of kindergarten, as we were all talking about our day at the dinner table, I watched as both of their faces lit up. They realized that they had separate experiences, they had something of their own in their day, and something to talk about that the other didn’t already know.

Their relationship has continued to improve through the years and I’d even say they are now, finally, friends. They’ve found some common interests and enjoy each other’s company most of the time. And, now that they have separate bedrooms, they even enjoy sleepovers in each other’s room.

Though my girls still don’t share any magical twin connection, they do share a bond as sisters and that is special enough. 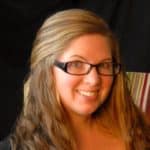 Elizabeth Joyce has been featured on Scary Mommy, The Mighty, and InspireMore, among others. Elizabeth shares her truths as a cancer survivor, mom via IVF/FET & gestational surrogacy, anxiety struggler, family historian, budget traveler, and simple, ordinary life enthusiast. She lives in Illinois with her husband, son, and twin daughters. Follow her on  Facebook and find out more at about.me/WriterElizabethJoyce.