Home » Did You Find Out It Was Twins At Later Ultrasound? Twin Ultrasound? 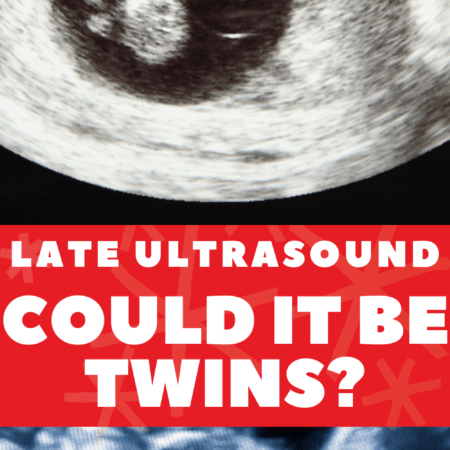 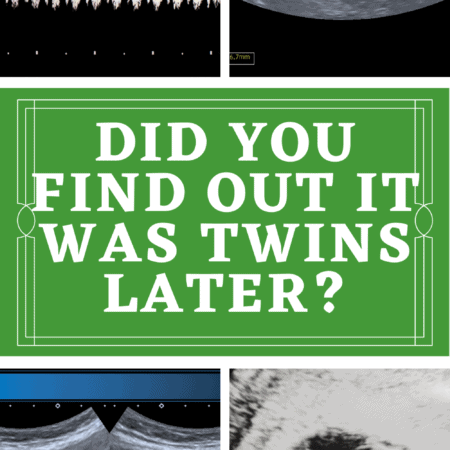 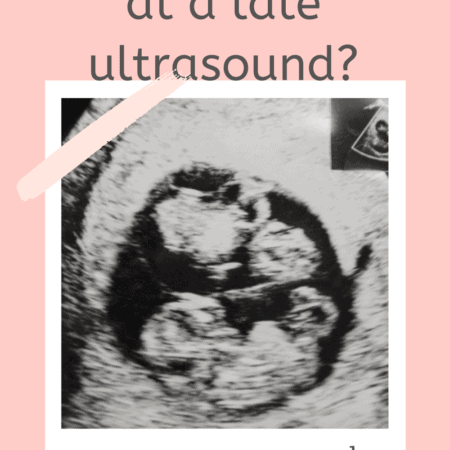 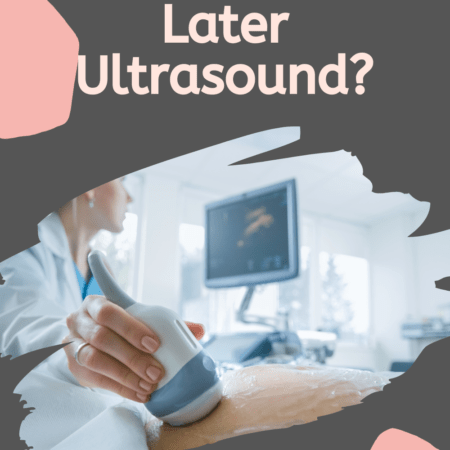 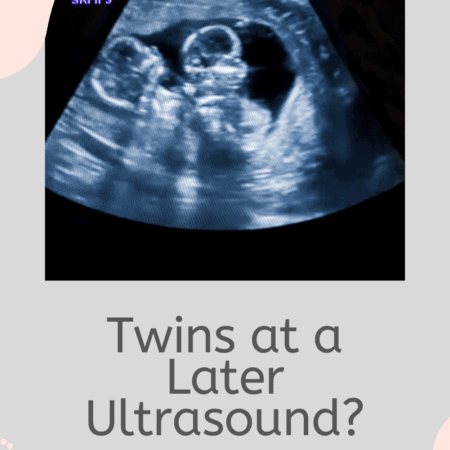 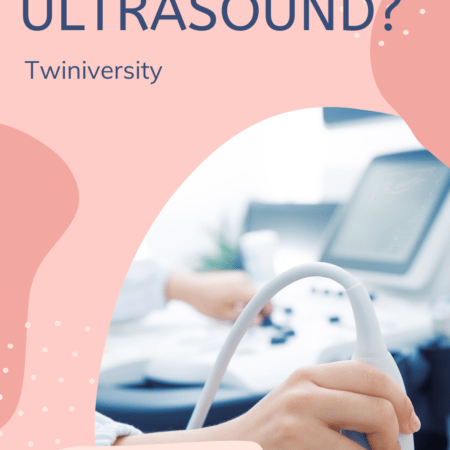 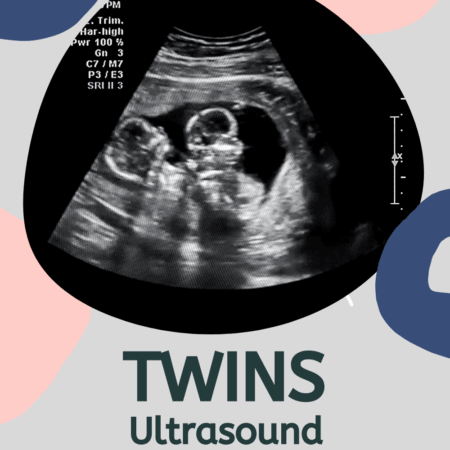 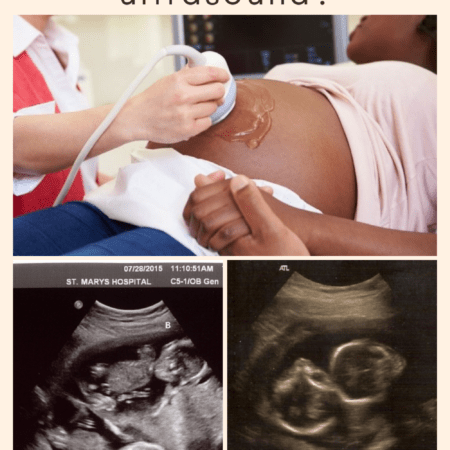 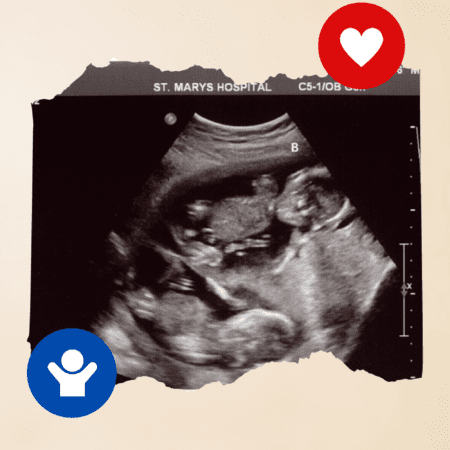 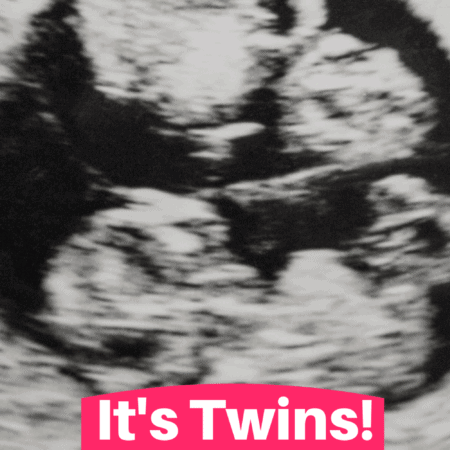 Are you wondering if you might be pregnant with twins later in your pregnancy? It doesn’t happen often but there’s always a chance a second baby went undetected early on in your pregnancy and nobody caught the signs of twin pregnancy. Many women report seeing twins at the 8 week ultrasound, or even earlier, but see what twin moms had to say about their twin ultrasound.

A MoM-to-be recently asked about a twin ultrasound:

“Did anyone have an ultrasound at 12 weeks and they missed one of your twins?” twin ul5 weeks

– I had my first sonogram at 11 weeks and the doctor didn’t catch the other baby. The ultrasound tech was the one who told me I was having twins at 22 weeks. I changed doctors as soon as we got out of that appointment. ∼ NO

KC says about her twin ultrasound: “It really amazes me that this happens as much as it does. Missed ours on early ultrasound then several Dopplers only heard one heartbeat. Found out it was twins at gender scan at 18 weeks. Complete shock…

Also found out they were identical and thought I was going to lose my mind. Felt like I won the mega millions that day. Sheer exhaustion from sheer joy and shock. We had one heck of a gender reveal party that turned into a twin reveal party”. ∼ KC

Pregnant with twins? Check out our Twin Pregnancy Week By Week Timeline

Finding out you’re having twins at a later ultrasound

– “I had a scan at 9 weeks, only saw one baby. Then at 14 weeks, one baby again. At 18 weeks we were scheduled to find out the sex of the ONE baby. I had a room full with my hubby, mom and MIL and then the nurse went to another computer to check something…

My heart sunk, my mind went to the worst news possible, the tech came back saw my tears and said, “Oh honey, you have no clue that your having TWO babies do you?” There were smiles, screams and crying by all! I was shocked!” ∼ EU

– I had first scan at 10 weeks and doctor didn’t see second baby, I did! Being my third pregnancy I think I’m pretty good at making out what is what and I told him there was another baby below and to scan down. He did with a smile and then was shocked I was right. ∼ CM 6 week ultrasound twins

– Didn’t know until we were 20 Weeks along and that was when we went to a 3D place. My doctors had done two ultrasounds and three heartbeat checks before then, once at 6, 10 and 12 weeks! We had done IVF so my hormone levels were even being checked. ∼ MHV twin ultrasound 5 weeks

– “Yes here, too! Sonogram at ten weeks, my very skilled and reliable OB said “just one!” All the routine checkups didn’t give any reason for doubt (like 2 heartbeats). Went in for gender sonogram…

at 20 weeks and the tech looks at us and says, “Did y’all know you’re having two?” With two older kids, that was the shock of my life! Even the best doctors can’t always know.” ∼ MF t

My Normal Ultrasound Turned Into a Twin Ultrasound

BLB said about her twin ultrasound:  Yes! We had an ultrasound at 8 weeks and then again at 20 weeks, 6 days. That’s when we found out about our “hidden” twin! Had many heart rate checks in between the two ultrasounds and our con-artist stayed cleverly hidden. ∼ BLB

– “When I went in for my first appointment at 12 weeks they measured and found 1 heartbeat. I asked for them to check for a second because I had been able to feel my uterus for like a month. I had been telling my husband…how I believed it was twins but he just laughed it off. The nurse said I was measuring bigger than I should so I got a scan that day. My husband looked like he was gonna pass out.” ∼ SH 6 week ultrasound twins

– “At 10 weeks the ultrasound tech almost didn’t see our 2nd baby! She was nearly done with measurements and double-checking something when she suddenly announced that she was going to start over to be sure she was measuring the right baby each time! We were confused… for a moment and then shocked when she said there were two. It made me wonder how many times a twin isn’t known until much later.” ∼ SBM twin ultrasound 5 weeks

– Had my first ultrasound at 6.5 weeks. The tech said she was SURE it was just one baby. (I had asked if it was twins) 4 weeks later same tech does the scan and I think she was more shocked than I was that there were 2 babies on that screen! ∼ AP 6 week ultrasound twins

Was your twin ultrasound a shocker?

– I only found out while giving birth. Nurses as well. The 1 nurse was so shocked because when I was in labor and checked the heartbeat, she only heard 1 heartbeat. She was shocked out of her mind. Imagine how I felt.  ∼ CVDR 6 week

– 7 week ultrasound only saw one baby (ultrasound done both abdominal and vaginal). Routine 20 week appt surprised with twins. ∼ HE twin

KT said about her twin ultrasound- I had one at 9 weeks and they missed one twin so at 13 weeks they had trouble hearing the heartbeat with the Doppler so they did another ultrasound and there was other one. ∼ KT twin sonogram

– “Found out at 18 weeks because of a positive blood test for spina bifida. Turns out it was an extra baby making blood test go wrong.” ∼ MK 6 week ultrasound twins

Some ultrasounds surprise you

– Nope, at our first scan (9 weeks) there they were, two little bubbles side by side. I knew what I was looking at before the doctor even said anything. ∼ LE

– Found my twin at 13 weeks when I went for my first OB appointment. I had 4 scans before that with the IVF dr. Never saw baby B. ∼ DBL

-I had my 8 week ultrasound scan and he found both twins immediately. ∼ CL

Don’t stress: I Had A Routine Twin Pregnancy and Delivery

MA said about her twin ultrasound: Yes, we didn’t find out until Week 21. They missed my Baby B two times prior to that. ∼ MA

– I saw both my little guys before the doctor could even say twins! ∼ VH 6 we

– I had a scan at 10 weeks and was told it was twins. Then a trainee scanned me at 19 weeks and found out it was triplets. ∼ MJ

– Nope they noticed mine right away at 6 weeks ∼ CJ

If you just saw TWINS at what you thought was a normal ultrasound, you need to check out our Twin Pregnancy Guide to get you started on the right foot!

Can twins not show up on an ultrasound?

Let’s put it this way, nothing is truly impossible. It is highly unlikely that twins might go undetected. But, as you can see, it is certainly possible that you might have another little surprise in there and find out at a later ultrasound.

Do twins take longer to show up on ultrasound?

Again, it is rare but possible to experience a “hidden twin” during your pregnancy. Mostly, the imaging available nowadays will pick up a second baby pretty early on, but a twin can be overlooked, especially if your provider isn’t looking for a twin at first glance.

How late can twins be detected?

Twins will almost always be detected by your 20th week. It is unlikely you will even have to wait that long but it can (and has) happened to many of our twin moms in our community. Beyond the 20 week mark, it is incredibly unlikely. But if you feel you are bigger than you should be or that something isn’t quite what you expected during your pregnancy, bring it up to your doctor.

Can you tell if you are pregnant with twins before a twin ultrasound?

There is no way to tell if you are having twins before an ultrasound. Some people swear that their hCG count is significantly higher than a singleton pregnancy, but this isn’t reliable since every woman and every pregnancy is different.

Other women swear they are more tired or nauseous than they should be and that must mean twins. It could be. But you just have to wait and find out at your ultrasound for sure.

Twin Pregnancy Stories to Get You Ready for Delivery