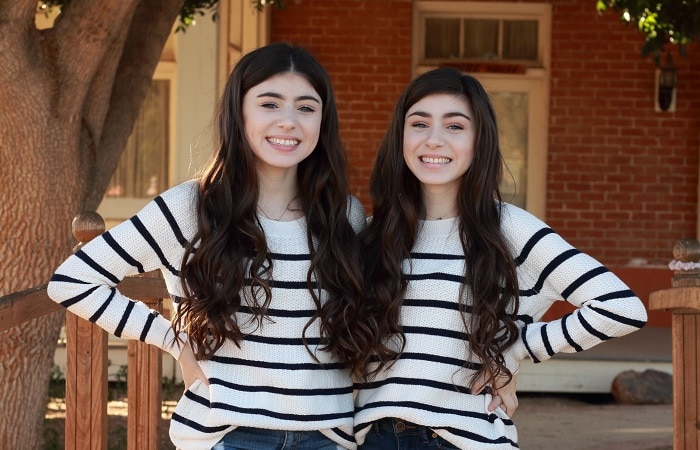 Have you wondered about the differences between your twins? It turns out that science just proved that identical twins are not genetic clones after all.

Extra! Extra! Read all about it! This just in! Identical twins are actually not exactly the same at the DNA level.

But seriously, many of us didn’t actually know that. Even those of us with identical twins may not have known this. The fact that identical twins are not genetic clones may come as a bit of a newsflash to many.

To be honest, if not for our own DNA twin zygosity test that told us my daughter’s DNA is 99.97% Identical, I wouldn’t have known. I saw that number and went….”hmmmm….not 100%” and went online to learn about it for myself.

Okay, so I obviously knew that my girls are not exact replicas of each other, even on a cellular level. The newsworthy part of this information is the research that has just been released out of Iceland. This research tells us these DNA changes took place as early as the first two weeks of development in the womb.

So, do you have identical twins where one twin is almost a whole inch taller? (I do!) Did your obstetrician or pediatrician tell you it was due to environmental factors? (All of our doctors told us that). That could be true.

However, we now know that it could also be that there are real-life, scientific genetic differences between the two children. WHAT?!?

In Iceland, researchers studied 381 pairs of identical twins and 2 sets of identical triplets. Of those pairs, it turns out that on average there were 5.2 genetic differences within each set of twins. In fact, of the 387 pairs of twins, only 38 sets were true duplicates of one another, proving that it is actually more uncommon than not that your identical twins are truly identical according to their DNA.

Another 39 pairs of these twins had more than 100 changes between their individual DNA? Wow! That’s a lot of changes considering they are all identical twins, don’t you think?

What does this mean for identical twins?

In a nutshell, it means that science is finally confirming something many of us identical twin parents have suspected all along. They are finally catching up by saying officially, and on the record that no, identical twins are NOT genetic clones. Not even according to their biology.

This means that the naysayers who have been telling you that your twins simply cannot be identical because one twin’s brown hair is slightly darker than the other or there is a 1 pound difference in their birth weight with no medical explanation like placenta or cord problems. Yes, we are right, and now we have the science to back us up.

It also means that just because one twin has a disease or ailment, does not mean the other will. This can include every diagnosis from cancer to epilepsy and most everything in between.

Possibly most notable among the research findings are the consequences to the nature versus nurture theory. We all probably know a set of identical twins that have one thinner twin and one over-weight twin. It might be tempting to say that the thinner twin participates in unhealthy eating and exercise habits while the other twin does the same thing but in the exact opposite way.

The old school of thought was that the size difference is completely environmental and due to lifestyle differences. But this new research actually suggests that it may be due to differences in each twins’ DNA.

Twin parents knew twins are not genetic clones all along

Okay, maybe we didn’t exactly KNOW this, but we sure suspected it. We are probably less surprised than the average Mama (or Papa) bear to learn that these differences are real. Identical twin parents are probably even less surprised. Validated, even.

So while we have always known our twins are similar but different, we will happily take this new information and add it to our list of comebacks to those well-meaning questions or assumptions about twins and twin parenting. I mean, hey, you can’t argue with science and DNA doesn’t lie, does it?