Home » Could it be Apraxia of Speech? One Twin Parent’s Journey 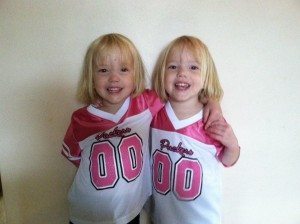 We have two beautiful identical twin “princess minions” which are children numbers three and four in our family. We use the term minions for all 4 of our kids for many reasons; it’s easier to get them off the playground after school by shouting “Minions assemble!” instead of rattling off all of their names, we watch Despicable Me on a daily basis, we will teach them to do our evil bidding, and lastly, the girls sound exactly like them due to the CAS (Childhood Apraxia of Speech, also called Expressive Apraxia).

They are Mono-amniotic twins (daddy’s definition: one yellow egg yolk, two baby birdies) born at 32 weeks. They spent 21 days in the NICU with some ups and downs. They were sent home, happy, pretty healthy.

Around three and  a half months of age we started with some spoon feeding but had some issues with choking and unusually large volume of spit up. We knew it was a bit unusual
so we called in an Occupational Therapist (OT) from our areas Early Intervention program. The OT showed us how to train them to eat by touching lip, tongue, roof of mouth in sequence.  We did this for about a month and the girls got much better at eating, so much so that they were discharged from the program after 6 weeks!

But when we went in for their six month follow up at the clinic, they noticed some delays in babbling, but because they were still little (around 7.8 pounds) we were told not to worry, they might grow out of it.

At around nine months old they were still only swimming (not crawling) across the floor (asymmetrically) and face planting. Again we went to Early Intervention and had a PT (Physical Therapist) come in to help. She discovered some muscle string tightness and the discovered the girls had no forward protective response.  After some infant massage and lots of parent aided physical moving of arms and legs in a crawling pattern, they got it, but still a lot of face plants.

They started pulling up on furniture around 13 months, but no still not developing the forward protective response, there was a lot more crashes which diminished their desire to do more. But they were motivated because of their brothers running around outside.

By the time they were 18 month old they had a significant (25%) delay, but we did not qualify for Early Intervention services because we now made too much money (apparently $50K for a family of 6 is considered rich!) and insurance would not cover the needed therapy.

So, by now daddy is Google-ing everything and we are coming up with strategies to work with our issues of clumsiness, limited talking and choking when drinking from different vessels. 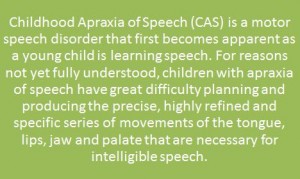 We finally ran across the term APRAXIA. The symptoms Apraxia were: feeding issues, motor planning issues, unclear speech, clumsiness, and more. BINGO! This was it! We started implementing the treatment as if this was it and found results.

At the their 24 month clinic visit I floated the balloon of “Could it be Apraxia?” The full diagnostic team present at the clinic said that they would look into it but that it’s fairly rare and add to the fact that the girls were above expectations in all of the other areas. But by the time we went back six months later, the girls were given the diagnosis. This was in fact Apraxia.

You may wonder what is Apraxia? It is a disorder of motor planning, which may be acquired or developmental, but is not caused by incoordination, sensory loss, or failure to comprehend simple commands (which can be tested by asking the person to recognize the correct movement from a series). 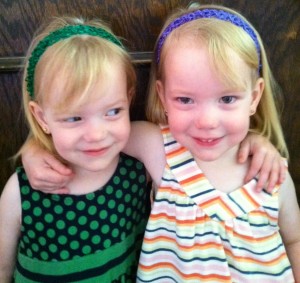 Our daily lives with CAS (Childhood Apraxia of Speech) ebb and flow. The girls are very happy, active little creatures who get into Mommy’s make-up, ride their bikes with helmets and no shoes, dump their brothers Legos, “pop” all the Hosta purple flowers, look for potato bugs under the garden stones, take the cushions of the couch and build forts, help Daddy “flip” the laundry from the washer to the dryer, empty their dresser drawers looking for that perfect shirt and (sometimes) matching socks, and hold the lug nuts and torque wrench while Daddy is changing the tires on the vans; all “normal” 3 ½ year old stuff for princesses.

But then we have the “I don’t know what you’re saying” moments. This leads to monosyllabic grunts and whines, a lot of pointing, and frustration for both parties. When we figure out what they want, we try to make them say it clearly (all be it, broken down phonics). When we don’t know what they are trying to say, it does turn into frustration, crying, and giving up on their part, which makes me sad because we do not want them to give up and compromise just because they cannot vocalize their wishes.

Second, the signing, especially during the crawling period had the potential to increase the “face planting” and concussions that we were already getting because of the “no forward protective response” issue (which are also a part of the apraxia). That with the lack of confidence we (Daddy) had in the fine motor skills for forming the signs (even the modified ones) we, just have not want to go there yet.

Lastly, with the new house, the twins and the older two brothers (four under the age of four at the time), working opposite shifts so we could keep them home (Mommy 7-4, Daddy 5-11:30) we were living in the blur: trying to maintain, trying to figure out what was going on with the girls, in and out of four car seats constantly, Daddy and all four minions at the zoo in our “triple” (double with sit/stand) which did not fit in the back of the van with the tray and canopy attached,  with the “man bag” the size of Kentucky with diapers for three, snacks for four, etc.; there was not a lot of time to learn a new language and teach sign to Daddy, the twins, grandmas, aunties, uncles and the brothers.

It’s not to say that we will not go to sign language for the girls as a backup for their communication, but we are holding out, hoping that something is going to “click” soon like it did with the motor skills.But I understand the verbal improvements might not go as well because the English language is so easy (insert sarcasm) and has simple and finite rules which apply across the board, NOT.

Currently, our “tool box” includes a lot of visual facial cues, chin touches, lip sweeps, pointing at the nose and throat, chopping motions with hands, musical conducting motions for vowels, candle blowing, bubble blowing, poof-ing of feathers, blowing objects (marbles, crumpled paper, spaghetti noodles) across the table, blow painting with and without straws, and of course a package of wipes, two pull ups, a bottle of water and band aids, and an ice pack.

The Speech Therapist/Pathologist we are currently seeing through our local school system is using the “Easy Does It for Apraxia” – Preschool series which she special ordered from the district and from which the girls homework comes from. It involves some cutting with scissors, coloring, placing objects in a puzzle, matching picture sounds as we say the sounds. It’s not too intensive, but that is where we are at right now.

The school district admits that they know little about CAS. They are open to learn about it to help our girls and stress to us that any knowledge we gain at home of what works and what doesn’t to share also with them. THAT is the scariest part. It seems that we are relying on what Daddy is getting off the internet (because everything you see on the internet is true), interpreting, inferring, applying it and putting it to practice.  Awesome for research and knowledge for knowledge’s sake, but playing Sid the Science Kid with your own children’s “disability” is a little disconcerting at times. Yes, we are getting some input from professionals and have yet to branch out of the district for help (we have been actively researching this for three months in between life). The help we are getting is good, but it sometimes seems like the 1st graders are asking the 4th graders what prom is like. So we continue, a little more diligently, figuring this thing out. 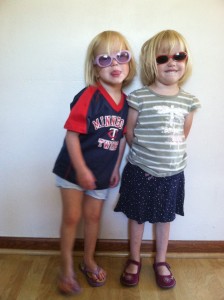 My minion princesses have CAS, it doesn’t mean they can’t do it, you just don’t understand that they can just because your language is limited to verbal/auditory inputs.

Oh, well. We dance on, with our tutu skirts, hockey sticks, band aids on our knees and smiles on our faces; getting it done the way we know how.