Home » What to Expect When Your Baby is Having Surgery 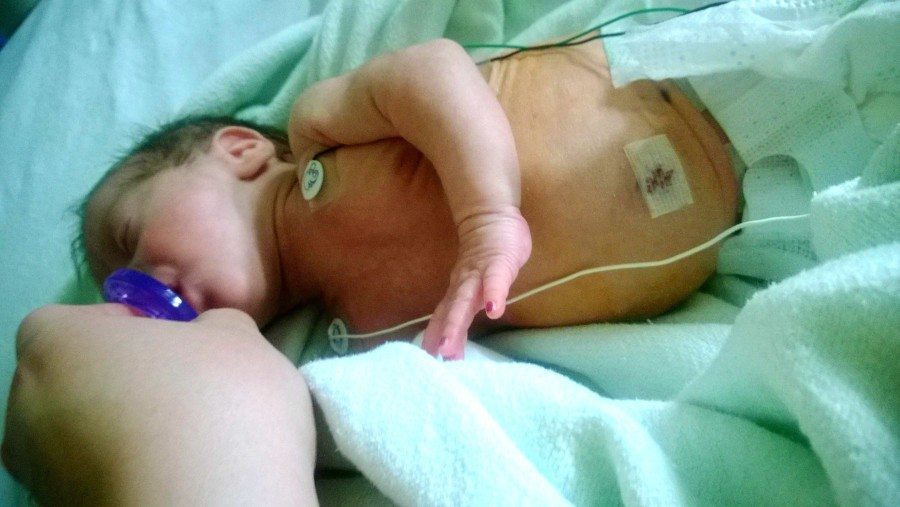 Your infant having surgery can be a scary time and is often combined with lack of knowledge of what you can and can’t do when it comes to surgery for infants. Many of the dos and don’ts will vary based on the age of the child, the kind of surgery, prematurity, and the location where the surgery takes place.

I knew long before my daughter’s release from the NICU that she was going to need hernia repair surgery. I have had surgery before and had my own idea of how things go, but surgery for infants is nothing like surgery for adults. This left me ill prepared for the path ahead and I made many mistakes preparing for surgery day. I learned from these mistakes and was much better prepared when my son had the same surgery two months later.

During our NICU stay I was informed about the need for surgery and that it would be a routine laparoscopic surgery. I was familiar with the procedure since I had my gallbladder removed a year prior. At this point I assumed that things would go exactly the same and did not ask any further questions. I would take her in at a predetermined time and after a short time she would be brought out to wake up from the anesthesia and then I could take her home to recuperate. I was prepared for nothing more than a few days of having a cranky infant. 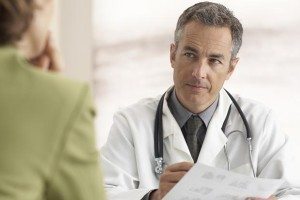 When I arrived at the consultation with the surgeon I expected a short appointment where he would do nothing more then take a look at her abdomen (the location requiring surgery) and then I would make an appointment with the nurse for some time in the future — no big deal right? Wrong. The exam went as I expected until the end. The surgeon sat down with me and explained that not only did she need surgery but she needed surgery sooner rather than later and that they already had the nurse calling the children’s hospital to see if there were any operating rooms available as well as an overnight room. This is where shock took over. I didn’t understand why we would need an overnight night room. I asked the doctor if the procedure was not a routine laparoscopic surgery because normally people just go home after that. This is when I learned my first lesson when it comes to surgery on infants. If the child was born prematurely they are required to stay overnight if the surgery takes place within the first year of life. Chronic Lung Disease is common in premature infants and anesthesia suppresses breathing. She would be staying overnight to have her blood oxygen levels monitored.

A room was available and the surgery was scheduled for the following morning at 11:00 am. I was instructed not to feed her after 11:00 pm and no liquid, not even breast milk, after 5:00 am. I ran around all afternoon trying to get things arranged for the next day. Staying overnight meant I would not be able to take her twin with me to the hospital so I focused on finding someone that could watch my son while I was away. Unfortunately he was a difficult case since he was on oxygen and even though my sister was willing to watch him while my husband was at work we soon realized that wasn’t going to work out. I would be at the children’s hospital 45 minutes away with our only car. My husband would have no way of getting home or going to get our son from my sister. At this point even though my husband had already taken a lot of time off of work he had to take more.

After a long night of no sleep because of a crying hungry baby, my daughter and I left for the hospital. We had a long drive and had to be there by 8:00 am to get checked in and prepped for surgery. We checked in and signed all the paperwork. Her weight and height were taken and we proceeded to the prep room. She was so small that the surgical outfit would not fit her. What was supposed to be pants and a shirt ended up being just a gown. 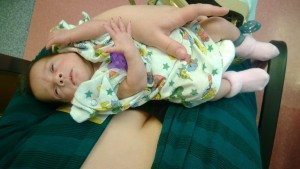 All of her vitals were taken and we proceeded to the waiting area. The surgeon came out to get her and said that she would be out in about an hour and he would come to the waiting room and tell me how things went. I handed her over and went to the waiting room where I anxiously waited for an hour and fifteen minutes. Once my name was called I was greeted by a nurse who informed me that during the surgery they found another problem with her abdominal wall and that she was going to be in surgery for at least another hour. I continued to wait until I was approached by the doctor. The surgery had gone well and both openings in her abdominal wall had been closed. I was led by a nurse to the recovery room where all the children and their parents were waiting for the anesthesia to wear off.

As soon as she woke up she was crying and ready to be held but that would have to wait until we were moved to a room. A group of people came to wheel the crib, oxygen, and monitors a few feet away to a private recovery room. This was the downside to needing surgery immediately. There were no rooms in the hospital available so we would have to stay the night in a room the size of a walk-in closet with only a sink and a toddler bed. Lucky for me I am short enough to fit in a toddler bed. Then I learned my second and probably most important lesson. My daughter was very hungry. By now it was about 2:00 pm and she had not eaten since 5:00 am. I prepared to pump because my daughter’s mouth was too small to latch. I asked the nurse for a bottle and was met with shock that I had not brought my own. The hospital did not have feeding supplies available in the surgical area and they could not get anything from another area of the hospital. I was forced to leave my child hungry and in pain with the nurse to return home. I drove 45 minutes home and packed up milk, bottles, a cooler, and ice packs because I would not have any way of refrigerating the milk. I headed back to the hospital fighting rush hour traffic. After a 2 hour drive and numerous calls from the hospital regarding how much longer it was going to take me to get there I arrived back at the hospital. Bottle and milk ready to go but I hit another wall. They had no way of heating the milk up. My little trooper toughed it out while I poured out the cold liquid gold, cleaned the bottle, and pumped fresh warm milk. Finally she was fed and after a while of cuddling she began to breathe well enough to have the oxygen removed. She received her pain meds and I rocked her to sleep. 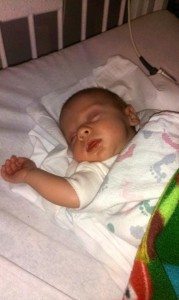 I combined as many bottles as I could, cleaned out the rest, and settled into the toddler bed to get as much rest as I could before the pain meds wore off. It was a long night with her waking frequently for no other reason than to be held. Although I was unable to use any of the milk I brought with me I was grateful I brought a cooler to store the milk I pumped in. Morning came and it was time to return home. I was given the discharge instructions and was shocked that unlike when an adult has surgery she would not be going home with a prescription for pain meds. She would only be allowed a small dose of Tylenol every 6-8 hours. I arrived home and my husband left for work. It was a long couple of weeks while she recovered but the experience prepared me for when the time came for my son to have surgery.

Two months later I was well prepared for my son’s surgery. However this time because the need for surgery was not as serious we were able to wait until a date when a room was available. Here they were able to supply bottles, refrigeration, and a bottle warmer. So I might have seemed overprepared for this one. However, I did learn a third thing on this trip to the hospital. Don’t bring your good bottles. The labels used to identify my milk in the fridge would not come off. I spent the rest of my bottle feeding days with discolored hospital labels stuck to side.

I was underprepared for my twins having surgery because I made assumptions based on past experiences. Make sure to ask plenty of questions before the date arrives; no matter how silly they may seem. The staff at the children’s hospital was super friendly and would have been more than happy to answer my questions had I thought of them in the first place. 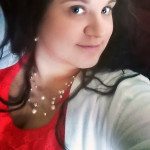 My Baby Had a Ventricular Septal Defect

From “Failure to Thrive” to Thriving

Click here for info on our expecting and new twin parent classes in New York City and Chicago!